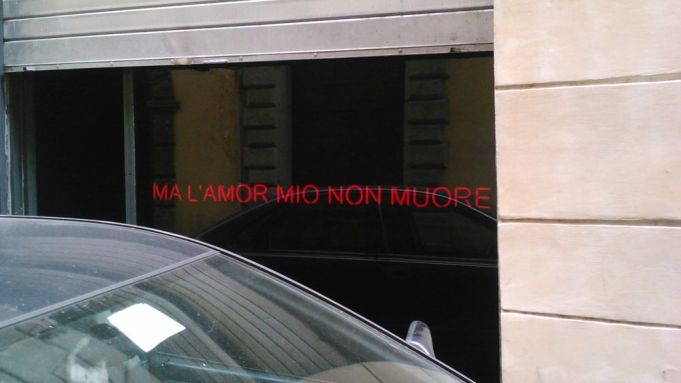 Galveston, Texas, on the Gulf of Mexico, is a 45-minute drive from Houston. It was the state’s first capitol, and though it’s been wiped out by numerous hurricanes, it clings on resiliently.

The occasion for my visit was the Galveston Artist Residency (GAR), a new start-up that hosted a single artist in 2011, and this year welcomes three residents. Artists Eric Schnell and Bert Geary, and architect Robert Whalley founded GAR, wanting to stimulate Galveston’s artistic community. The program started in the wake of Hurricane Ike in 2008, which destroyed Schnell’s home and studio (among those of many other residents).

GAR’s current artists in residence—Nick Barbee, Nsenga Knight and Kelly Sear—receive a stipend and apartments in a nearby building. The studios at GAR are large and full of light, and from the windows it’s easy to look out at the cruise ships in Galveston’s port. The residents have an exhibition up in the gallery.

I soon took off for San Antonio and the Luminaria festival I curated, which was postponed due to inclement weather and was rescheduled for May 5, Cinco de Mayo. Though the postponement was initially a disappointment, it afforded the artists extra time to work on their plans and installations. The members of Kansas City-based collective Whoop Dee Doo turned a former office space in the basement of Hemisfair Park’s Women’s Pavilion into a giant (non-functional) microwave in which a can of cat food will “cook.”

Almost faster than I could pack my bags and passport, I was off to Rome, Italy. I lived in Rome for nearly two years as a student, and had the best of memories from my time there. It was just as much a pleasure on this visit.

I stayed with my friend, the artist Paolo Tamburella, who keeps an apartment that’s built into an old Roman city wall where the aqueducts once flowed. It’s probably the most creative adaptation of architecture I’ve ever seen.

Tamburella’s studio is just as impressive. A number of his works were on the walls when I arrived, including some from his series “Kalpantukali,” for which he gathered beat-up soccer balls on an extend trip through India, opened all of them, and with the help of paid workers, re-stitched them back together to make an impressive rippling skin. Hung on the two-story wall of his studio in the natural sunlight, they looked like pieces of rare ancient textiles.

For the 2009 Venice Bienniale, Tamburella resurrected a dhajazi, a traditional shipping boat used in the Comoros Islands to hold a large shipping container—the type used to ship art. Dhajazi were banned by the president of the country to comply with international shipping standards. The container nestled in the floating wooden boat was a stage for Comorian dockworkers who sang traditional songs. The project spoke pointedly to local reservations about globalization and standardized commerce.

Tamburella’s studio happens to be across the Via degli Ausoni from the Fondazione Pastificio Cerere, where Paris-based Claire Fontaine’s exhibition was being mounted. The collective’s work will be included in the first exhibition I’m organizing at CAMH in May.

Claire Fontaine has a concurrent solo project at the gallery T293, “Ma l’amor mio non muore.” The exhibition features an instructional video in which a former bouncer leads viewers through a series of worst-case scenario situations—bar fights, a knife attack. Clicking away in the corner of the room, an executive desk marble, customized for Lehman Brothers, plays an infernal game of tennis with itself. Emblazoned with the word “NETWORKING,” it begs a confrontation with invisible hands pulling puppet strings of power and money. Outside, behind the gallery’s glass front, a red neon sign read “but my love never dies.”

Coincidentally I ran into Daphne Fitzpatrick, another artist who will participate in my show at CAMH. We took the opportunity to see an exhibition of Evgen Bavcar, a blind photographer with a penchant for feeling his way around images—especially when his subjects are young, disrobed women.

I visited Siobhan Liddell’s studio at the American Academy. Liddell’s work balances precision and play. The list of her current materials sets the tone: painted bamboo sticks; recreations of traditional tribal masks; shiny copper wire; pressed squiggles of paper pulp; paint and thread; assembled together in solid and gossamer constructions that seem to emit light. Her works create phenomenological situations, where things are made and seen before reasons for them need to be given to justify their existence. In the ample Italian light, the studio was a magic garden.

I found my way to Milan to visit Latifa Echakhch’s exhibition “Verso” at kaufmann repetto. The gallery’s two rooms are balanced in color, tone, and energy. In one, three large black paintings, made by affixing carbon paper in a loose, hand-applied grid, held the walls around a bent wood and cane chair that was a pedestal for a small accordion-like concertina which was partially concealed under a white linen napkin, as though its player had just stepped out of the room for a break.

White poster hanging devices, the kind used to posted advertisements in the front window of a bank, circled the room. Save for golden clips, the hanging devices established a blank palette. These clips were like musical notes, and the walls became pages of song notation.

Outside in the gallery’s entrance, and visible from the windows of both galleries, is an installation of empty flagpoles, pointing to the sky in an unlikely forest of diagonals. Full and empty, dark and light, poetic and blunt and materially inventive, Echakhch’s exhibition is a beautiful song.

I haven’t even begun to talk about my visit to Rovereto, which motivated the entire trip. The exhibition “Gina Pane (1939–1990): ‘È per amore vostro: l’altro'” (It is for your love: the other), curated by Sophie Duplaix for Roman art center Mart, was a revelation for me. This exhibition was an opportunity to see many of her works for the first time.

Covering the whole trajectory of Pane’s career, from her early abstractions to outdoor sculptures (almost a kind of Earth Art), and turning to more performative situations and actions from the ’70s, and followed by her “Partitions” series made before her untimely passing. The exhibition was evidence of an artist fully ahead of her time, fully engaged with her time. An inventive documentarian of her own work, one finds that Pane was as interested in contextualizing her performances in autonomous works as she was in creating deep and engaging opportunities for her audiences.

It was a great pleasure to see Pane’s longtime partner Anne Marchand, who looks after the estate’s interests, and to meet some of the artist’s friends and former gallerists. All were pleased with the current interest in Pane’s work. Some ideas are so ahead of their time that it takes us a while to catch up.

Trump Endorsed Her. Now She Wants to Use State Power to “Crush” the Left and Impose “God’s Moral Order”

Sportico Transactions: Moves and Mergers Roundup for May 20