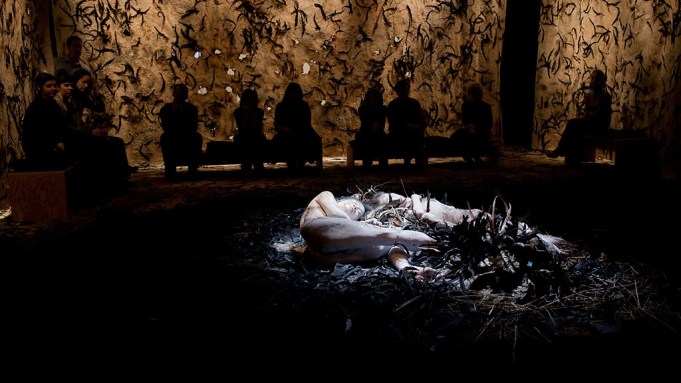 Traveling with a curious, “roving” temperament is part of the fun of being a curator in the contemporary field, where wanderlust is gratified by a continuous onslaught of art fairs, biennials, international expos and “big moment” conferences and symposia. Given limitless resources, curators could probably spend a good portion of their time migrating from one venue to the next, with varying levels of pleasure and discovery attending their sojourns. On the brink of another series of openings over the unfolding summer season, starting with dOCUMENTA (13), in Kassel, Germany, which previews June 7, we hit the road—and skies—again, schlepping catalogues through customs, racing to grab lunch between speakers and, in the evenings, dinners with friends, and seeking inspiration from the range of ideas, practices and personalities that inhabit the contemporary art world.

Time is on everyone’s minds–not only as an elusive feature of everyday life but as a theme in art. Travel both kills time and opens it up. As colleagues have often noted to me, “The only place I can ever really get uninterrupted work done is on planes and in airports.” A recent conference at University of California, Berkeley, “Making Time,” tackled this and related topics.  Organized by Shannon Jackson, director of the Arts Research Center at Berkeley, the conference brought together curators, artists, scholars and academics to address the diverse manifestations of time-based practice in contemporary art. Deliberately open-ended to the various readings of what constitutes “time-based,” the conference included perspectives from film, dance, performance and visual culture.

Performance and performativity anchored many of the conversations and debates in “Making Time.” Few attendees could dispute the dramatic rise of performance-related programs in both the academy and the museum: more public in-gallery events; more festivals and biennials; more participatory encounters designed to animate visitor experience; and more artists working in these arenas for curators to track, critics to write about and students to study. Some speakers, like Rebecca Schneider from Brown University, examined performance as a newly minted commodity of the art world. How is it possible to “acquire” an action, she asked rhetorically? Questions concerning the changing role of institutions buying, presenting and contextualizing event-based art are fascinating and rich. One participant argued that audiences seek more personalized encounters with artists and their peers. Another noted that live performance triggers a rare form of communal experience that technology-weary audiences seem to be craving.

As reward for sitting inside on a succession of gorgeous spring days, “Making Time” participants were rewarded with some “live time” of their own. Dancer and choreographer Ralph Lemon delivered a memorable lecture (event? performance? he was reluctant to classify it) when he told the story of his collaboration with former sharecropper Walter Carter. Reading under lamplight as video played overhead, he described the slow process of entering the life of this 100-plus-year-old man who became his creative partner, friend and occasional muse. Scenes of Carter performing various Lemon-inspired actions–tossing broken records into a grave-like ditch, smearing lard on a ceramic vessel, taping together fragments of old LPs and leaving them in the rain–reminded me of the early performance work of artists like Bruce Nauman and Vito Acconci, in which they undertook seemingly senseless tasks like ball-bouncing and skin-biting, but without the deadpan humor that accompanied these precedents. Carter’s earnest participation in Lemon’s piece—and willingness to both engage and individualize the assigned actions by inflecting his own personality on their execution—was poignant. (Carter died in 2010 at the age of 102.)

As with any ongoing public “conversation,” the dialogue became more casual over the days of “Making Time.” People moved in and out of the lecture hall, chatted in the courtyard and escaped for a mid-afternoon reward to Cream–without question the best ice cream sandwich place anywhere, and cheap ($2). A few of us took pictures, including one by L.A. artist Daniel Joseph Martinez of some notably fabulous hair. Martinez spoke under the daunting heading “Irresolvable Questions About Art,” and cautioned participants to avoid overstating the distinctions between “time-based” and “object-based” practices, which are increasingly fluid designations for artists. He also claimed the best-appropriated quote of the session, in response to pervasive language about embracing the risk of failure: “Everyone talks about failure but no one wants to be associated with it.”

Speaking on the subject of time, lecturers and participants offered an array of ethical, artistic, and theoretical positions–a lot of stimulating content for participants and copious note-takers to digest. To that end, I must conclude with my own humble attempt to distill overarching themes under adverse conditions–namely the absence of legroom on my Minneapolis-bound flight on Sunday afternoon. Too cramped to open my laptop and too tired to beg for mercy from the guy reclining in front of me, I had but one tool of creative distraction for the next three hours–my handy cell phone camera, its own little vehicle of surreptitious time-capture.