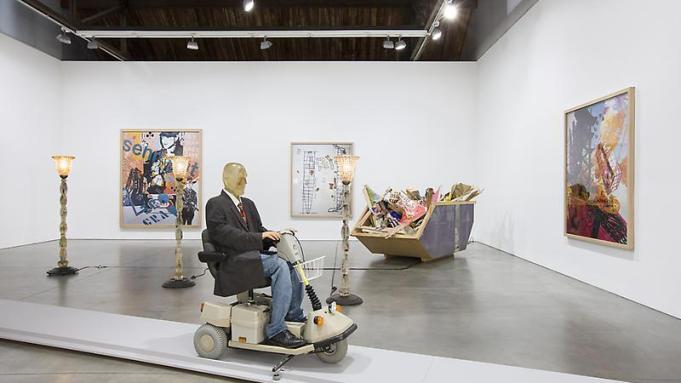 Last week the Roving Eye once again rolled through Chelsea in search of fresh ideas and interesting points of view. These days I start my tour with shows of the tried and true, and hope not to find it tired and blue.

My first stop was, of course, the Picasso show at Gagosian on 21st Street, even though I’m feeling totally Picasso-ed out. The recent (and tedious) “Picasso: Guitars 1912–1914” show at MoMA followed a show of work by the artist at Gagosian in London last summer in London, which itself was preceded by the big
Gagosian “Picasso: Mosqueteros” just two years ago. My retinas are full of them, and my ears are ringing with wave after wave of record-setting auction results. Nonetheless, this current gallery show (which is even beautifully titled: “l’Amour Fou”) has so many great works that I had to love it.

I can’t say much of anything bad about the show, except perhaps that the subject of the show, his mistress Marie-Therese (grandmother of the show’s charismatic co-curator Diana Widmaier-Picasso) was an odd looking woman, her face and head so angular and  masculine she looks hewn from a block of stone.

The show includes several interesting vintage photos of the odd couple, Pablo in his late 40’s with a pubescent girl of 17. Perhaps he needed such exotic taste in women in order to find so many creative ways to paint them.

Next I eyeballed the two shows by John Chamberlain, one at Pace consisting mainly of inventory left over after he recently deserted them; and one at Gagosian on 24th, consisting of the mostly large-scale and monumental new works created over the past three years with the financial support and Belgian production facility of backer Ernest Mourmans. The new big ones are fantastic and huge, as if Chamberlain took all his energy and in a late burst of energy (he’s 83) re-invented himself as a young, virile and even macho artist. They look scary at first, but after my third visit they began to feel softer, warm and fuzzy even, a bit like creatures from Spike Jonze’s Where the Wild Things Are. It’s a breakthrough.

The Pace show is also good but in a sad way. It’s great to see the variety of whacky colors and bent metal strips and car parts that he did for all those years in the ’80s and ’90s—and to realize how far he’s come from there now.

This Eye rolled on to 22nd Street where I took in the work of another octogenarian, Jasper Johns, and his new show at Matthew Marks. This one gave me the blues. He remade the fabulous “Number” paintings from the late ’50s in cast aluminum and hung them on the wall or put parts of them on pedestals. Johns may be an artist of immense and deserved renown, but a half-century later metal casts of his canonical works look like kitsch. These “new” sculptures don’t add to the old idea and look like oversized paperweights.

I also took in the Donald Judd show at David Zwirner, the first show since the gallery picked up the estate. Though I love those big aluminum floor boxes, and the tension of their sneaky asymmetry, more the merrier is not the case here. One gallery of boxes would have been enough. Putting 9 of them made it feel too much like a museum show, which it isn’t. Or it might resemble a parking lot of oversized, unsold Judd—and it sort of did.

Uptown I eyeballed the L&M Arts show of Warhol’s Colored Campbell’s Soup Cans from 1964, of which only 19 exist, almost all of them in this exhibition. I love the Soup Cans from ’62, the plain boring red and white ones that made Andy so famous years after the great Irving Blum showed them. What a story they tell—works that didn’t sell and were kept by the dealer, and ended up at MoMA. These later colored cans are garish, with strange color combinations I don’t care for. Any Warhol show is worth seeing, but I wouldn’t give you a ’62 can for three of your ’64s.

I also popped into the Chaim Soutine/Francis Bacon show at Helly Nahmad’s on 76th Street and Madison. The gallery covered over the windows and made their space feel like an expensive peep-show in a sexy way. In case you don’t get a chance to see it, trust me, Bacon wins.

The Subodh Gupta show at Hauser and Wirth also deserved a peek. But he’s India’s art star, and a small solo show of this leading artist from an emerging market can’t help but look cramped and a bit suffocated in a small
gallery space.

And so, though slightly bloodshot, the eyeball rolled on. I was curious to see what results when one of Gagosian’s top lieutenants changes his name and re-appears as an artist with a show of his own. Andisheh Avini (better known as Andy from Gagosian uptown) did that at I-20 on 23rd Street. The works blended his heretofore undisclosed heritage as a displaced member of the Iranian diaspora with ideas from the famous artists whose works he deals every day—particularly those of Warhol, Christopher Wool and Frank Stella.  Andisheh told me that purchase of any of his worthwhile paintings would not earn me better pricing on any works from his regular job. Nonetheless the show appears to be doing quite well.

Nearby Luhring Augustine has a show of Kippenberger’s work, and it surprised me. In his untitled 1991 installation, a strange cast mannequin self-portrait in an electric wheelchair. Nearby is Carousel with ejection seat (1991), which sees the launcher turn on a circular railroad track, and Heavy Burschi (1991), a dumpster full of broken paintings. They reminded me that there’s more to this vast and influential body of work than the pretty self-portraits that come up at auction.

My day would have to end, and it was time to head home and break out the Visine. Summer shows are up next when the art world slows after the upcoming Basel mega-fair in early June.