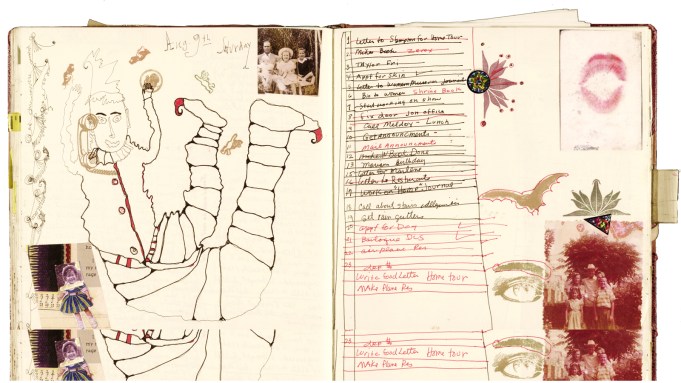 In 2006, I saw an exhibition at Ronald Feldman Gallery in SoHo entitled “Notes and Itineraries: 1976–2004.” The installation presented the archive of veteran art writer Kim Levin, who for more than 20 years compiled the weekly “Voice Choices” list for The Village Voice. On the occasion, hundreds of annotated press releases, gallery checklists with drawings and gallery announcement cards lined the walls, tracking aesthetic trends, careers, gallery geography and the art economy. I remember my feeling of inadequacy upon leaving this exhibition. I’ve always been jealous of list makers.

I’ve never had the patience to maintain and organize the press materials and ephemera related to the thousands of exhibitions I’ve encountered in my career as a museum director, curator and critic. At times, I have tried to list the biennials, fairs, gallery weekends, museum and gallery exhibitions I’ve visited—even artworks I have seen. Small Moleskine notebooks have been bought; special pens or mechanical pencils readied—but the lists never seem to materialize.

Adding insult to injury, last week I went to see the new exhibition at the Morgan Library and Museum, “Lists: To-dos, Illustrated Inventories, Collected Thoughts, and Other Artists’ Enumerations,” (open until October 2). This exhibition, organized by Liza Kirwin (who also edited the wonderful catalog that accompanies this presentation), is culled from the Smithsonian’s Archives of American Art and presents more than 80 hand written, typed and drawn lists made by artists, dealers, designers, architects and jewelers. The types of lists one finds include:

These lists range from the historically important—Pablo Picasso’s controversial selection of artists he recommended for the 1913 Armory Show—to the intimately personal, like sculptor and designer Harry Bertoia’s “May-Self Rating Chart,” an extremely critical self-assessment done for a class project when he was 17 years old.

The lists, hung on the wall and in vitrines, are not displayed in any specific order, but themes emerge as one walks around the room. There are several lists dealing with money or, more specifically, its lack. Notes by Elaine De Kooning on the couple’s 1954 tax filings include a whopping $250 itemized deduction for taking taxis to art openings. Grant Wood’s 1931 list of economic depressions and how long they lasted is also economic in origin. One list with a more profligate slant is Franz Kline’s liquor bill; he spends $274.51 on booze for his 1960 New Year’s Eve party.

There are several examples of illustrated lists, including my personal favorite, artist Adolf Ferdinand Konrad’s 1963 list of things to pack for a trip abroad: drawings of art supplies, clothing and books, with an illustration of Konrad himself wearing just underwear. Margaret De Patta, a modernist jeweler, kept notebooks with small drawings of her inventory of rings, earrings, pins and bracelets next to which she would write the item’s name and document the purchaser.

Another stand out in this category is Ad Reinhardt’s graphic inventory of black paintings he sent to the Jewish Museum for their 1966 retrospective of his work. In these sketches Reinhardt reveals the underlying structure of the paintings so curators and registrars can identify them.

However, the bulk of the documents are riffs on the standard “to do list.”  A 1968 diary entry by Leo Castelli included calling Frank Stella, Philip Johnson and Bruce Nauman, as well as a top-of-the-page reminder to pick up razors, tooth powder and Anacin at the drug store. A more poignant list by Eero Saarinen saw the architect enumerating what he wanted to accomplish in January 1961, about a week before he died. In his last productive moments he was able to cross off several items but ultimately what we are left with is an unfinished list of chores he did not complete.

I guess for me, Saarinen’s list encapsulates an eternal personal block with “list making.” You make a list, you cross things off, you make another list and start again, but you never really finish anything. That said, I continue to dream that one day I will be one of these hyper-productive list makers who wants to turn chaos into some kind of personal order.