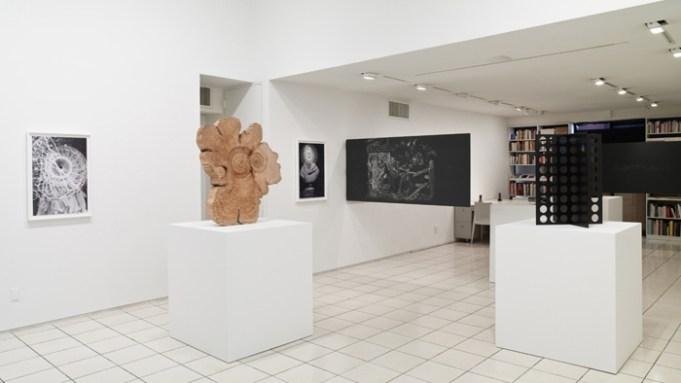 After weeks of attending fairs, my husband Ethan Wagner and I have returned to New York.  Our first stop was the Miguel Abreu Gallery on the Lower East Side, where the work of Gareth James was on view. The exhibition is the third in a series of shows. In 2008, at Cologne’s Galerie Christian Nagel, James turned a bicycle he stole into art; in 2009, at New York’s Elizabeth Dee Gallery, he used a diagram drawn on a blackboard by Althusser, the French philosopher who killed his wife but did not remember. The diagram, presumed to have some significance but unknown even today, was the central theme of the Dee exhibition.

The blackboard returns in this show, in three configurations that reference vastly different stories-not to mention issues of philosophy, politics, colonialism and display that are central to James’s practice. A rather large tree and mutated stump sits on a pedestal held up by a flute. The stump was cut from a tree James found while bicycling in the forest near his home in Vancouver.

Lining two walls are photos of Levi-Strauss, the 19th-century Rebecca Riots and General de Gaulle, over which James has graphically laid the Althusser diagram, multiplied and rotated so it creates a vortex and is no longer recognizable. The same altered vortex is incised into the tree stump.

The pictogram-like “stories,” spread over the three blackboard installations, are rich in meaning and are alone worth the trip to Orchard Street. One references James’s Welsh roots, the other refers back to Althusser and the school where he taught, and the third references the collection of Sir John Soane, the 19th-century British architect whose home is now a museum in London. James’s installation itself is powerful and, dare I say, elegant. In fact, as we walked through the show on our own, without the benefit of reading the text or speaking to the artist, my husband turned to me and gleefully said, “I am not sure what it all means, but we should buy it-it’s glorious.” I think what he meant, and what we both felt, was that James had succeeded in creating an exhibition in this relatively small space that offered the viewer an expansive arena for investigation. As the show began to reveal its meaning, it was also clear that James, absent from New York for the past couple of years, was very much among us.

At the risk of self-promotion, I’ll also report another remarkable event this week in New York: the launch of Atelier’s The Inventors of Tradition Collection, 2011. Atelier, comprising designer Beca Lipscombe and artist Lucy McKenzie. in collaboration with the design office Panel (Lucy McEachan and Catriona Duffy) and tailor Steven Purvis presented their garment collection for the first time in the United States. Thea Westreich Art Advisory Services and Thea Westreich / Ethan Wagner Publications had the great pleasure of hosting the four-day event at our offices in SoHo.

The line of clothing they exhibited is a product of artist production and design. The result is a remarkable selection of high-quality wearables that use the best of Scottish manufacturing. A significant part of the artists’ objective is to reinvigorate the pre-existing Scottish textile industry but at the same time to set their own terms of production, dissemination and discourse. This will come as no surprise to anyone who knows McKenzie’s practice and the quiet determination that propels it.

The seasonless (if you live in Scotland) raincoats, work coats, wovens and cashmeres are made to order and take up to four months for delivery, which oddly did not deter the great many who attended and ordered.

McKenzie created an installation using works from our collection, and the whole team created custom racks. The four collaborators and their handsomely outfitted tailor were active in engaging with everyone who attended, demonstrating their commitment to establishing long-term relationships with clients.