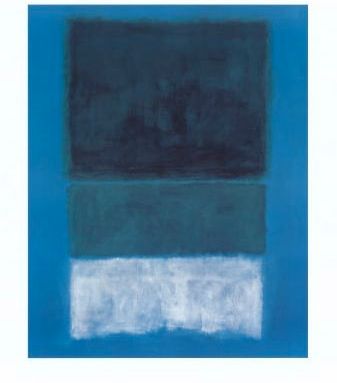 The Tony Award-winning play Red, about Mark Rothko, is currently being produced in regional theaters throughout the United States. As the former curator of the Mark Rothko Foundation, I have become something of a roadie, giving lectures on his work and even interviewing the late artist (the actor in character) in conjunction with the GableStage production in Miami.

Most recently I was at the Contemporary Arts Center in New Orleans on a panel that focused on Rothko’s two months as a visiting artist at Tulane University (February and March 1957), during which time he met with art students and set up a studio. The sojourn coincided with Mardi Gras, and the artist enjoyed his strolls through the French Quarter, which he described in a letter to his friends Herbert and Ilse Ferber as a “miniature of a section of Paris with its intense charm of scale.” [1]

He’d later claim, in a letter to artist Pat Trivigno, that the two large canvases he painted in New Orleans—No. 14 (White and Greens in Blue) and Red, White and Brown—were “important breakthrough paintings” for him [2]. Prior to this visit Rothko’s work consisted of brightly colored or pastel-hued expansive fields and narrow bands that extended almost to the painting’s edge, where a thin nimbus of pigmented ground radiated around the central forms. In New Orleans, Rothko began to darken his palette.

No. 14 especially marked a new direction, with its two dark green rectangles stacked heavily over a smaller white rectangle in a deep blue field. The border of this painting is considerably wider than the narrow frame of earlier canvases, and instead of using a contrasting color for the underlying field, the border in No. 14 is closely related to the other dominant colors, causing the forms to unite in a monolithic block.

Although Rothko called this a pivotal moment, he didn’t clue us in to why New Orleans had such an effect on him. During my visit to the city’s French Quarter I was struck by the pervasive use on doors and shutters of a darker blue-green that perfectly matches the color in Rothko’s painting. One of the colors the Vieux Carré Commission sanctions for this landmark district, this tone was readily available in the local hardware stores where we know Rothko bought his paints.

One mystery solved, I was curious as to what inspired Rothko to widen the edges in the two canvases. While I was driving back to the airport, the cemeteries lining the highway, with their distinctive New Orleans above-ground tombs that look like miniature, stately marble houses, caught my eye. No doubt Rothko, who produced paintings in his surrealist period in the 1940s titled Entombment and who aimed in his classic canvases to induce feelings of “ecstasy, tragedy, doom,” would have been drawn to these funereal vaults and it may have led him to stack the rectangles of No. 14 to form a solemn architectonic structure with proportions similar to the shapes of these tombs. The large scale of the canvas and symmetrical arrangement of the stacked rectangles corresponds to the verticality of the viewer.

The sense of foreboding in No. 14 and subsequent paintings was further heightened by Rothko’s new approach to installation. When he first exhibited No. 14, at Sidney Janis in 1958, he hung it with other similarly hued paintings instead of opting for the discordant arrangements of previous exhibitions, and he insisted on dim lighting in contrast to the blazing illumination of earlier shows. Under dim lights, the eye strains to discern the dark blue from the dark green, and consequently the looking process is slowed down.  The effect was to hold viewers in a smoldering and pulsating environment where they faced the terrifying prospect of death and entombment.

Bonnie Clearwater is Director and Chief Curator of the Museum of Contemporary Art, North Miami. She is former Curator of the Mark Rothko Foundation. She has authored numerous publications, including The Rothko Book (Tate/Abrams) and Mark Rothko: Works on Paper (Hudson Hills).