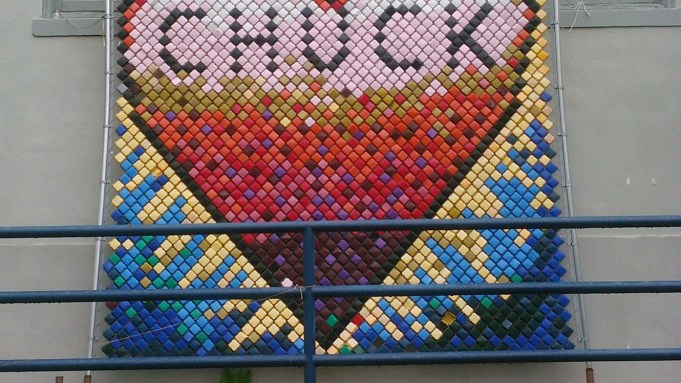 Last July, I moved to Houston from Brooklyn to take a position as curator at the Contemporary Arts Museum Houston (CAMH), joining an inspiring team that includes director Bill Arning and senior curator Valerie Cassel Oliver. I’m fortunate to have moved to a city with such a vibrant cultural scene, great museums like the Menil and Museum of Fine Arts Houston, amazing artists and study programs like the Core Residency Program at the Glassell School of Art, and supporters who are enthusiastic about new ideas.

More on Houston in future posts, as I’ve been doing some traveling in (and out) of Texas.

I’ve been chosen as the adjudicator (a fancy way to say curator) for visual arts at San Antonio’s third annual Luminaria fiesta, so I’ve made frequent trips to the city, which is a 3-hour trip via I-10 from Houston. Housed in HemisFair, the popular fiesta drew an estimated 300,000 visitors in a single evening last year! It opens this Saturday, Mar. 10.

I’m the first out-of-town adjudicator, and I’ve had the opportunity to imagine a presentation of light-based artworks that will physically and metaphorically “light” HemisFair for the evening. Chosen from a pool of online submissions, 14 artists and collaborative groups will, by turns, create immersive video installations, constellations of lit-up piñatas, paintings, and a variety of performances. This year’s artists include Deanna Arriaga, Kyra Devine, Marylou Hernandez (whose light-up piñatas I immediately fell in love with), Joanna Kidd, Ben Mata, Michael Menchaca, Brian Przybyla, Andrea Puentes, Gary Sweeney & Hyperbubble, 10bitworks, Michele Monseau, and Gisette Padilla and H. Jennings Sheffield.

With Luminaria’s support, I’ve also had the opportunity to invite other artists into the mix: the Kansas City-based collective Whoop Dee Doo, whose members can be expected to wow the crowds with one of their signature dramatic and zany installations, and New York-based artist Irvin Morazan, who’s orchestrating a participatory performance for Luminaria-goers. Dressed in one of his outstanding sculptural headdresses (weighing nearly 100 lbs!), Morazan will preside over a Soul Train-style dance line lit by the motorcycle headlights of the San Antonio chapter of the L.O.W. Riders (which stands for Ladies On Wheels) bike club.

In San Antonio, I’m fortunate to have a new home-away-from-home at the newly established residency Casa Chuck. The Casa is one of a half-dozen homes on a property owned by patron and philanthropist Mike Casey. It’s locally referred to as “the compound.” Housed in the former abode of the very-missed visual artist Chuck Ramirez, who was killed in a tragic bike accident in 2011, Casa Chuck hosts visiting artists, writers, curators and other cultural workers.

Following Ramirez’s passing, his friends Henry Estrada, Ethel Shipton and Hills Snyder established this program with the support of the artist’s family, and Chuck’s former home became Casa Chuck. Though I never had the pleasure of meeting him, Ramirez’s charm and spirit is apparent everywhere in the home’s salon-style hanging of artworks and arrangements of tchotchkes, and in its commodious furnishings. Rooms painted turquoise, orange and lime green still house Ramirez’s library, his beautiful collection of green-glazed Mexican terra cotta pottery and, tellingly, a kitchen cabinet with an entire shelf loaded full of shot glasses that gives an impression of the Casa’s social history.

See, adjacent to the Casa is Sala Diaz, the long-running and humbly appointed two-room gallery—one might think of it as a proverbial “clean, well-lighted space”—that has been a center of San Antonio cultural life since it opened in 1995. Casa Chuck falls under Sala Diaz’s aegis.

My first time in town, in December of this year, I attended an opening there for Albert Alvarez’s exhibition “Codename Doomsday.” As the evening progressed, the crowds flowed from the gallery into the compound’s large shared back yard. Out back, under festoons of party lights strung between trees, groupings of tables and chairs invite celebrants to while away a convivial evening. I’ve also heard tales of nights brimming with laughter and boasts, logs thrown on bonfires, and copious amounts of mescal—hence the shelf stocked with shot glasses. Plantings dot the yard, an Eden that’s home to free-roaming chickens, an extended family of feline pals, and residents’ dogs. Everyone and everything seems to peacefully coexist. It’s like being in a Rousseau painting come to life! The compound has been home to many of the communities’ artists—actors, architects, writers, and visual artists among them—and it’s full of positive vibes.

Presently, the gallery hosts Steve Wiman’s exhibition “There’s More Where That Came From,” an installation of detritus—orange paper tickets, a marigold-colored ball of acrylic yarn, a cobalt blue plastic racket and a lavender-painted wooden toilet seat among them—fetchingly arranged in a ring around the room where the floor and wall meet.  Wiman has taken something as immaterial as a rainbow and captured its gradations and movement of light in a portrait composed of bits of junk. Each carefully and lovingly placed item feels like a brushstroke in a larger spectrally shifting painting.

Organizations like Artpace lead the way in San Antonio. Artpace’s residency program creates a vital space for local Texas artists, alongside national and international colleagues. Current residents include Adam Pendleton, James Sham, and Florian Slotawa. And Artpace’s new executive director Regine Basha is, like me, a recently relocated New Yorker (though she has earlier ties to the area). I’m excited to see the organization grow under her care.

Currently on view in Artpace’s dedicated exhibition space, the Hudson (Show)Room, is a stunner of an installation by Tony Feher, whose 20-year survey exhibition will open at Houston’s Blaffer Art Museum in October. With gestural and structural economy, Feher has hung line after line of fluorescent orange, yellow and pink nylon twine, evenly spaced from one to the next between two pipes mounted on the gallery’s ceiling. The gravity-bowed forms make a shifting parabola, charting elegant curves. It looks from some angles like a complex grid. It invites one to project oneself into it like a hammock, though it’s too delicate to actually support human weight. The space’s gridded casement windows, of a type familiar in such industrially repurposed spaces, have been outfitted with “drawings” made from bits of blue masking tape whose mosaic accumulation on each window’s clear panes—the frosted ones were left untouched—evokes stained glass. As is the case in much of Feher’s work, simple and cheap materials are transformed through the artist’s vision and economy into elegant sculptural and visual exercises.

Yet another former New York colleague now calls San Antonio home: Steven Evans, formerly of Dia Art Foundation, has been since 2010 the executive director and curator of the Linda Pace Foundation. During my last visit to San Antonio, I was fortunate to attend a screening and discussion with the artist Isaac Julien, who had installed a 3-channel version of his recent work Ten Thousand Waves in the Foundation’s ample galleries. In the coming weeks the Foundation will host another such evening honoring Glenn Ligon, whose work is included in the Pace Foundation’s Collection. Ligon is a friend who’s very present in the state right now; his mid-career retrospective “Glenn Ligon: AMERICA” is currently on view at the Modern Art Museum of Fort Worth.