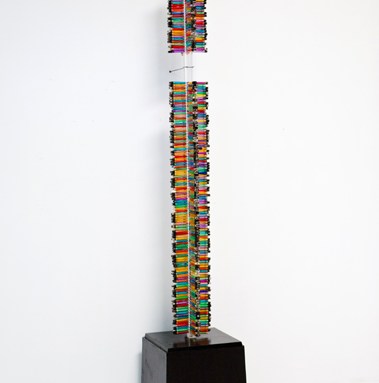 There’s been a recent influx of New Yorkers to the Texas art scene: Bill Arning to Contemporary Arts Museum Houston; Regine Basha to Artpace; Steven Evans to the Linda Pace Foundation and Gary Tinterow to the Museum of Fine Arts, Houston, not to mention myself to the Contemporary Art Museum Houston. But Texas has its artistic exports, too.

Artist K8 Hardy, a native of Fort Worth, currently has work on view in the Whitney Biennial. Her self-described “shoe campaign” features a wall full of Hardy’s chromogenic prints with photograms images of inventive foot apparel – pitons for ice hiking worn over striped stockings, for instance—and a chipped Formica pedestal that looks like it’s been shipped directly from a 99-cent store, on which the artist has displayed a series of images printed on a Plexiglas cube. A few objects on the wall correspond to the photographs. One is a pair of shorts for President Obama. Hardy’s campaign extends the reach of her “Positions” series (2009 to present), photographic portraits in which she (and occasionally her sister) performs a whole cast of characters. And now, after some time in Houston, I also realize just how Texan Hardy is: big and brash and an independent thinker with a take-no-shit attitude and a heart of gold.

Gallerist Lisa Cooley is another Houston success story. Cooley opened her storefront gallery in New York’s Lower East Side in 2008, and interesting works in the space often called me in off of the street, way before she and I ever became acquainted. Previously, Cooley ran a gallery in Houston for many years. In New York, she established an interesting program and a great reputation with artists and collectors, and subsequently some well-deserved press attention.

Today marks yet another milestone for Cooley. Formerly located at 34 Orchard, the gallery will open tonight in a new and improved location at 107 Norfolk Street, the former site of the popular bar and music venue Tonic. Cooley’s first exhibition, “Today,” which takes its title and inspiration from a Frank O’Hara poem, includes work by all of the gallery’s artists. including Jon Pestoni, Erin Shirreff and Alex Olson. It’s bound to be a blast.

I’m looking forward to an exhibition there in March by Austin-based Andy Coolquitt. As the centerpiece of the first Texas Contemporary Art Fair, held in Houston in 2011, Coolquitt contributed a dynamic work comprising two more-than-20-foot-long clear Plexiglas walls that intersected to form an X. The four resulting corners were filled with objects straight out of a contractor’s fantasy-used brooms, colored tape, plastic buckets and clip lights-and the work felt as much in dialogue with André Cadere as it did with Paul McCarthy and Home Depot. It got snapped up by a major European collector, and rightfully so-it was one of if not the most memorable moments of the fair.

Speaking of Austin, I sped off there one evening last week when the festival for which I curated a program, Luminaria in San Antonio, which I wrote about last week, got canceled on account of rain. (More on the reschedule later.) I was very excited to have a chance to see L.A. artist Wu Tsang’s first feature-length documentary, Wildness, which premiered at MoMA, New York, a few weeks ago and was screened at the independent film festival at South By Southwest (SXSW). It was my first time in Austin, and at SXSW, and the crowds couldn’t have been any more exciting, or intriguing! Tsang’s beautifully shot video (kudos to cinematographer Michelle Lawler) traces the rise and fall of a weekly Tuesday night party that Tsang initiated at Los Angeles’s Silver Platter, a bar known for its colorful queer clientele. Wildness tells the story of how the party got started, the bridges it built between newcomer artists and a community of mainly Latina queers, and the party’s subsequent demise due to complications between a pair of owners as well as some thoughtless press coverage.

Far from being an overall failure, the end of the party clearly galvanized a community and created a sense of shared interests. For a short time, for example, the party supported a trans legal clinic called Imprenta in a rented storefront next door to the Silver Platter. The story is narrated by the “voice” of the bar, and includes cameos by performers Zakary Drucker and Jack Doroshow (aka The Flawless Sabrina).

One artist I was excited to visit in Houston is Katy Heinlein. Her work creates a synergy between sculpture and painting but doesn’t fit very neatly into either category. Skeletal wooden structures, like stretcher bars gone rogue, are the core of her work. Instead of paint, Heinlein drapes, gathers and festoons the wooden under-structures with a variety of colorful (mostly) synthetic fabrics. In one work, a tilting tablelike surface draped with royal blue crushed velvet seems to defy gravity and float over the floor, pulled up into the air by crimson and burgundy hand-sewn ribbons. In another wall-mounted work, teal polyester is put through draping paces, and cinched in place with a tangerine-colored tie. Its fullness and voluminous pleats belie an aerodynamic form.

Tensions like this animate much of Heinlein’s work. Her synthetic fabrics feel right and desirable, and her palette takes advantage of the buzz between bright pops of color and a deeper, toned-down palette of browns, puces, burgundys and the like. Heinlein shows us what happens if sculpture and painting were subject to a Freaky Friday kind of exchange, and it’s right on.

Rachel Hecker’s paintings are one of Houston’s best-kept secrets, and I’m happy to have been let in on them. Three canvases from her recent “Jesuses” series will be included in my first exhibition as curator at CAMH, “It is what it is. Or is it?” (May 10-July 29). For the past year, Hecker has been teaching herself how to airbrush like a pro. She’s painted nearly a dozen head-and-shoulders portraits of Jesus Christ. Working slowly and methodically, Hecker builds layer upon layer of acrylic paint, creating details with stencils and occasionally drawing delicate pencil lines. Her pictorial references, however, skew contemporary.  She has amassed a look book full of source material clipped from magazines. Looking at her portraits one might notice Jesuses that bear a canny resemblance to actor Viggo Mortensen, say, or David Gilmour from Pink Floyd. Still others come from a parade of male models shot for cologne and fashion ads. With their shoulder-length dark hair and scruffy beards, these subjects resemble rock stars, but for the tunics they all wear. Steering away from the obvious signifiers-no halos or crowns of thorns here-Hecker refamiliarizes us with a subject whose representation is so deeply ingrained into our Western consciousness that, as she reveals, it takes little to establish a representational typology. Neither sacred nor profane, Hecker’s images of Christ wait for us to figure out what we believe.

And now I’m in Italy, taking the opportunity to attend the opening of a retrospective of the work of the artist and performer Gina Pane (1939–1990) at MART Museo di arte moderna e contemporanea di Trento e Rovereto and a solo exhibition of work by Latifa Echakhch at Kaufmann Repetto in Milan. I’ll be presenting Pane’s and Echakhch’s work at CAMH. And, strangely enough, yesterday I literally ran into New York artist Daphne Fitzpatrick on the street. Miles away, but it still feels like home. More on that next week!