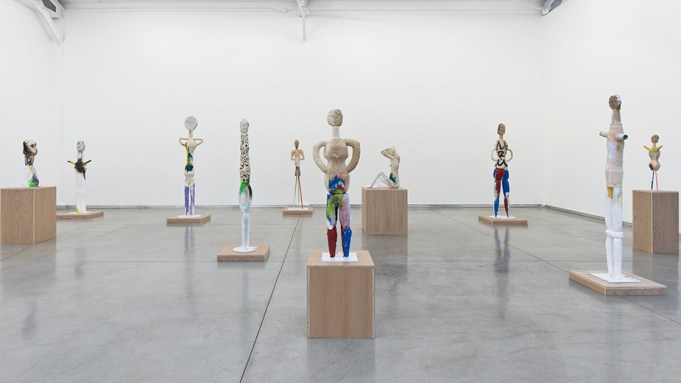 Writing in his 1946 manifesto, “Rehabilitation of Mud,” the artist Jean Dubuffet advocated for the creation of paintings made of “monochromatic mud . . . to discover an order (an image) within formlessness of matter so that one can rehabilitate that matter.” On view in a solo exhibition [through Aug. 18] at David Kordansky Gallery, Los Angeles, and a showcase at the Hammer Museum as part of “Made in L.A.” [through Sept. 2], Ruby Neri’s most recent sculptures, towering abstract bodies in clay and plaster, invoke Dubuffet’s call for art’s primordial return to terra firma. The L.A.-based artist’s figures seem to emerge from the earth’s depths by an act of spiritual conjuring, congealing into clay, plaster and steel as they rise up.

Incorporating traditional ceramics into her figurative compositions as torsos, arms and necks, Neri employs a faux-naïve style that fuses the decorative arts with references to the historical avant-garde. Doing this allows the artist to unload herself of excess theoretical baggage. Neri told A.i.A., “I am trying to loop back into my practice, through an outsider perspective, the genre of craft, in order to free myself from any loaded qualities that accumulate when I think about painting or sculpture. It is such a leap into this whole other context.” This gesture registers in an untitled work from 2012 as two oblong ceramic vessels simulating the hourglass shape of a busty woman. The sculpture’s disproportionate legginess in white plaster recalls Giacometti’s bronze figures, as does its existential angst, appearing as it does to be performing an act of self-asphyxiation, with arms doubling as handles.

Diverging from her colorfully painted abstractions of Cubist figures on canvas from 2009, Neri’s latest works emphasize raw materials, substituting vertical pile-ups of clay and plaster for thick impastos of acrylic. “Everything was so intensely painted before,” recalled the artist. “I wanted to back away from that, so here I am instead letting base materials come through and using only thin swathes of color.” Truncated on a triangular plaster base and installed on a tall wooden platform, Boy (all works mentioned 2012) is purposefully unfinished, revealing dirt- and skin-tones of matted clay beneath Neri’s graffitied signature in navy blue oxides around an elongated neck. That gesture, as well as the discontinuous foci of diluted acrylic and spray paint splotches and splats that the artist has applied with semi-automatic rhythms, suggests an act of defacement. “Once they were installed, the works reminded me of what it would look like if teenagers had snuck into a museum to defile Classical sculpture,” remarked Neri.

At the Hammer, positioned like a dancer walking towards center stage, Untitled (standing woman) is a rotund character who simultaneously preens and signals frustration. Made up with garish cosmetic strokes of pinks, yellow and blacks on her face, and handles of her midsection looking like hands placed on hips, she is a nag who performs her own unique version of womanhood. She is the matured, warped and distorted version of Girl, at Kordansky, who sits cross-legged with parted lips and hands melting into blobs on her forehead. More figurative in form and with only a slight hint of a vessel as her belly, she looks to be rocking from her cross-legged position into a vertical standstill, becoming part ceramic, part steel and all commodity. Visibly agonized, she is not quite ready to grow up.

For both shows, the artist constructed each sculpture in three separate parts-textured and flattened clay heads, smooth, hand-built ceramic midsections, and chunky white plaster legs covering and exposing rebar supports. “Mixing clay and plaster creates this strange, toxic poison that explodes in the kiln,” explained Neri, “so I had to create all of the clay pieces, clean everything up completely, create all of the plaster pieces, and then combine them.” Though she grafts these together with resin, the artist maintains a formal disjuncture between constituent units through painted boundaries and straightforward stacking, recalling the exquisite corpse games of André Breton and the Surrealists. The final constructions, all installed in rows at both Kordansky and the Hammer, effect a small army of expressive, contemporary humanoid figures.