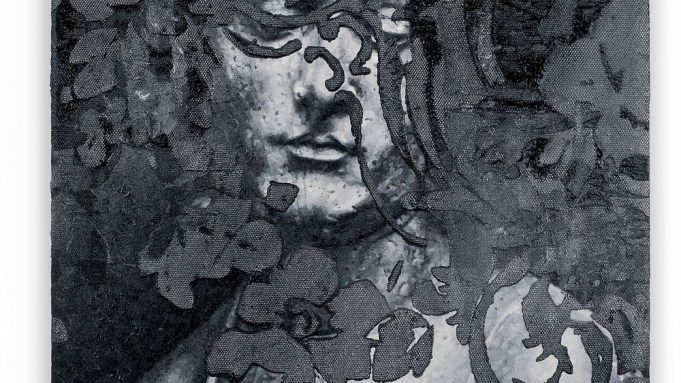 In July 2004, Rudolf Stingel covered the floor of Vanderbilt Hall in New York’s Grand Central Terminal with a wall-to-wall carpet featuring a design of blue roses. It was an audacious installation that for one month transformed the busy transportation hub into something closer to a hotel lobby, a Las Vegas casino or a more intimate space like a suburban living room. Muffling the noise of voices and foot traffic, the arresting work had an uncanny effect on daily commuters and tourists alike.

A similarly hushed and haunted atmosphere pervades Stingel’s current solo show in Venice, where he covered all the floors and walls of the three-story Palazzo Grassi with a rug resembling an Oriental carpet (through Dec. 31). Manufactured in Germany, the rug covers a total of some 80,000 square feet. The Italian-born artist, who works in New York and Merano, his hometown, used an enlarged and slightly out-of-focus photo of an antique Central Asian carpet as the basis for the weaving.

The effect of the elaborate, repeated geometric and floral patterns, and the rather fuzzy overall image in muted tones of deep red, with touches of brown, green-blue and black, can be hypnotic and a bit dizzying. While the installation overtly alludes to Venice’s ancient ties with the Middle East, it also, in a more subtle way, refers to the Vienna study of Sigmund Freud, who covered the room’s floor, walls, sofa and table with Oriental rugs.

In Stingel’s site-specific environment the carpeting serves mainly as a backdrop and foil for an exhibition of his paintings, featuring 34 works from the past decade. All untitled, some pieces were loaned by public and private collections—most by Palazzo Grassi owner and president François Pinault—plus 14 works from the artist’s collection, which have never before been publically exhibited. On view are two large-scale photo-realist-style portraits: a self-portrait and an imposing close-up of Franz West, a tribute to the recently deceased Austrian artist who was Stingel’s close friend.

Hung against the extraordinary tapestry, Stingel’s expansive silvery abstract canvases on the lower level shine with an almost ethereal light. Based on black-and-white photos, figurative paintings installed in the upper galleries are grisaille depictions of medieval sculptures of saints and Christian martyrs. They hint at the Crusades and Venice’s role in the historic battles to regain the Holy Land. The aim of all of this, however, is not toward the arcane or nostalgic. Today’s religious conflicts are brought to mind as Stingel highlights Christian iconography by means of a luminous and evocative carpet of Islamic design.

Restaurateur Richard Sandoval Is Opening a Tulum-Inspired Eatery in NYC