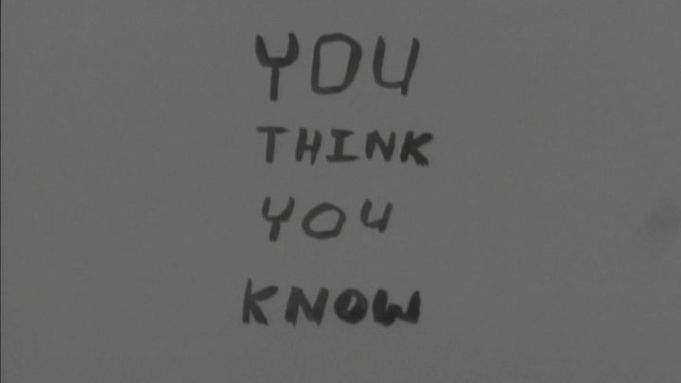 In “Transitional Effects,” at New York’s Participant, Inc., Sadie Benning resists the market-fueled craze for overhung exhibitions. She has culled just seven small abstract paintings from what she says is a trove of 48, mainly produced this past year, “outdoors,” in upstate New York. (She teaches in the summers at Bard.) These will surprise viewers who know Benning from her videos—though, as she tells A.i.A., “I drew and painted long before I had a camera.” In the back room, she premieres a new video, itself a departure of sorts.

Sparsely installed in Participant’s main gallery, Benning’s bicolor paintings are seemingly modest works that pack a punch. She makes them from jigsawed wood, layers of sanded plaster and joint compound, and commercial spray paint. Each consists of two parts of unequal size doweled together to form a square or rectangle. Blaring primarily fluorescent colors, they veritably glow on the walls, even as their slightly irregular contours and surface nicks invite more intimate scrutiny.

Benning speaks of the paintings in videographic terms and considers all the mediums in which she works—painting, drawing, sculpture, video and sound—as interdependent. In the bipartite structure of the paintings, she says, “I was thinking a lot about editing, and wanting kind of a pause between two things—like you get through splitting, cutting and wiping.”

As a teenager making diaristic videos in her bedroom, Benning was a pioneer in a brief craze for “Pixelvision,” the murky black-and-white medium achieved with a toy video camera manufactured by Fisher-Price. She went on to create a series of works in both Pixelvision and conventional video, most between 5 and 12 minutes long, and, in 1993, at age 19, became the youngest participant up to that time in a Whitney Biennial. In 2006, she produced a 29-minute, critically acclaimed animation, Play Pause, using single-colored filters over black-and-white drawings. She showed Play Pause in a solo show at the Wexner Center for the Arts, Columbus, in 2007, along with a group of large-scale paintings of colorful, cartoonish figures-the first paintings she had ever exhibited.

These days her two-dimensional works—whether paintings or drawings—are purely abstract. “Somehow right now expressing myself in abstract ways feels more clear-especially with everything out there so disturbing politically,” she tells A.i.A. She describes her paintings as “off and awkward and uneven”—a quality that links them inexorably to her early video style. “They’re all related to the human hand—the imprecision of it. But at the same time, there’s something mechanical about them. I was interested in art that looks like it’s been mass-produced.” She adds, “The thing about spray paint is that you have to use what you get. The colors I chose are highly synthetic looking, unnatural. The fluorescents are like neon, or something plugged-in.”

Screening on a monitor in the back room is Benning’s new black-and-white, single-channel video, Old Waves Record One/Old Waves Record Two (2011). Put on the headphones, and you’ll hear a series of songs composed and performed by the artist, as selected lyrics, scrawled in uppercase letters, appear and disappear in a cloudy-looking ether on the screen. Benning is also a musician, and was one of the founding members, in 1998, of the indie girls’ band Le Tigre. Her musical style is reminiscent of the deliberately amateurish riffs of late ’70s and early ’80s post-punk all-female bands like Delta 5, but even more stripped down. The instrumentals are a pastiche of tiny pieces of sound that Benning programs and plays on an Akai MPC-2000 sequencer. Among them are her own beats and guitar riffs, and music made by friends and relatives.

“I probably have hundreds of songs,” she says, although just 26 have been selected for the piece. “Each ‘record’ has an A-side and a B-side. People don’t think about that form anymore.” In order to listen, you have to watch; Benning has no immediate plans to release the music as a CD or MP3. She calls them “records,” although “what you’re seeing is physically not there—like when people say, ‘I love your painting’ when it’s a drawing, or ‘I love your video’ when it’s a film. I’m calling it a record when it’s a video.”

The written texts, in awkward uppercase letters, were videotaped on a copy stand at Cal Arts, where she was teaching; “They have this old analog studio, with a tube camera and four lights.” Lyrics are simple, repetitive rhymes that convey quirky narratives, desires, quotidian challenges (“accidents happen but some are fake/they did it on purpose and called it a lake;” “she’s got a wig in her bag/Running to work is such a drag”).

The off-kilter tone is pure Benning—sometimes angry or oddly moving, and almost always funny. Followers of her video work will instantly recognize her longstanding tendency of writing texts for the camera. In Old Waves, stripped of ambient images, they take on new life, in song. “Pop songs are always about identity and love and frustration, longing—things that can be embarrassing, even cheesy,” she says. “Singing in and of itself is always very vulnerable and human.”

“Transitional Effects” is on view at Participant Inc. through Oct. 23.