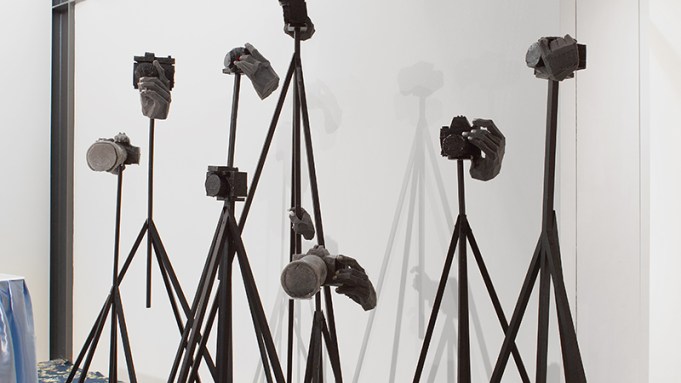 Early this past summer, Los Angeles-based artists Samara Golden and Davida Nemeroff were contacted by Modern Painters magazine, eager to cover their forthcoming two-person exhibition at Various Small Fires, a new space in LA run by dealer Esther Kim Varet, scheduled for the fall. Though a rough concept was in place, very little had yet materialized. Nevertheless, the publication assiduously pursued the two artists for details and explanations, tracking down Golden while she visited New York in June. Golden and Nemeroff soon after began working with a built-in audience for “Modern Painters” [through Sept. 30], a nod to the publication’s presence in the early stages of their co-production. The exhibition’s title points to the ways in which the media increasingly enfolds itself into artistic processes. As Nemeroff suggested at a preview for A.i.A. the day before the opening, “Maybe this is all for you.”

With a trenchant sense of hyperbole, the exhibition emulates a press conference, complete with a complimentary meal (boiled eggs with skulls painted on the shells for visitors to eat, coffee and rosé to drink) and brown metal folding chairs. Navy carpeting with cream and powder blue arabesques covers the gallery floor, invoking the interior of a Holiday Inn. Conference Table #1 and #2 (2012), rectangular wooden tables wrapped with billowing satin linens in baby blue, overwhelm the space while creating childlike hiding spaces underneath. Séance (2012), a painted assemblage of foam microphones, cameras, frayed wiring and candles, sits atop #2.

Allusions to death permeate the scene. Laying atop the tables and pressed below Plexiglas are two photographs by Nemeroff featuring Golden dressed and bewigged as the late Princess Diana. Blown up, cropped for detail, and covering each table’s four-by-eight foot area, the abstracted images, displayed under streaked glass, allude to a touch-pad’s zoom feature, giving form to and projecting the mania that surrounds the celebrity biography, or that of the artist. Said Golden, “The idea that, in death, all is equal, generates a remove from our own personal egos, and creates a space that made it possible for us to live in the moment while producing this show.”

The exhibition reflects the complexities of a friendship turned collaboration turned professional relationship. Golden and Nemeroff’s connection developed in the summer of 2009, when the two Columbia MFA graduates, relatively unknown to one another, separately moved to Los Angeles. Within a month, the two artists had created the video Howardina D’Ville visits Samara Golden at her Los Angeles Studio (2009). Bedecked in a yellow kimono top, black pencil skirt and heart-shaped sunglasses, D’Ville, played by Nemeroff, is a globetrotting curator on a mission to discover the next big thing. Golden, exaggerating her own role as an emerging artist, politely hosts the self-obsessed D’Ville in her studio. There, the curator’s stock inquiries are fielded with tangential asides from Golden like, “Look at these nice colors I’ve found since we moved to LA,” and “Does this piece make you wanna fuck?”

Gesturing towards a sculpture crafted by Golden that shares the video’s title and year-a portrait of D’Ville, sculpted from hot dogs in miniature and placed in a handmade glass-tiled Barbie Dream House Jacuzzi-the curator asks, “How is this piece going to translate in New York?” later exclaiming, “Make it again; make it so it has wings,” and, pointing to the sculpture, “I’ll sell this for…50 grand.” A satirical tableau of a fraught artist-curator liaison, the video projects into the gallery at Various Small Fires like overwhelming wallpaper, dramatizing the historical burden of the first impression, or their first project together. It forms silhouettes along the far wall of Camera Ghost #19 and #20 (2012), sculptures of foam hands with press-on nails that grasp black-painted cameras, which are mounted on wooden tripods. The shadowed outlines of those works within the video’s projection serve as a reminder of the looming lens, reiterating the distorting effects of performing one’s professional self for a real or imagined camera. Nemeroff knows this executive role well, which she has shaped and finessed as founder and partner (with dealer Mieke Marple) of Night Gallery, one of Los Angeles’s most dynamic new exhibition spaces.

A three hour video (purposely the same length as the exhibition’s opening), Midnight Cowboy (2012), tracks Golden and Nemeroff in long, loosely edited sequences of conversation, oscillating between the various points in their relationship as friends, artistic peers, and each other’s professional contact. They wear face paint reminiscent of  the look of horror punk rock band the Misfits. For Golden, the identity-obscuring make-up “brackets out a space that allows destabilization between the two of us to occur.” Well into production, the artists’ masquerade acquired new meaning when almost identical Dia de los Muertos-inspired makeup surfaced on the face of actress Blake Lively in the summer ad campaign for Oliver Stone’s Savages. “We had already started filming when we saw those posters everywhere,” explained Golden. “Seeing the same makeup being used on these huge billboards became this looming bastardization of what we wanted to do, and a disappointing coincidence.”

Sunbathing on the beach in Malibu, lounging atop an abandoned lot overlooking the downtown LA skyline, and relaxing cross-legged next to a waterfall in Angeles National Forest, the two women publicly unravel themselves. With parts scripted and others improvised, Golden and Nemeroff hang out on screen, submitting themselves to informal question-and-answer sessions about their health, habits, ethics and careers. “Alternatively we could have called the show ‘Women on the Verge,'” Nemeroff said. All along, the video captures the two artists trying to figure out exactly how to frame themselves and each other, using swivel viewfinders, tripods and shards of mirrors to produce and adjust multiple points of view within the shot.

Describing Nancy Holt’s reverberating speech in Richard Serra’s Boomerang (1974) in her seminal essay “Video: Aesthetics of Narcissism,” Rosalind Krauss wrote, “The prison Holt both describes and enacts, from which there is no escape, could be called the prison of a collapsed present, that is, a present time which is completely severed from a sense of its own past.” Like Holt and Serra, Golden and Nemeroff brace for infinite regress by recounting their relationship over the past three years as they live on camera.

Amazon Alexa Will Soon Be Able to Mimic Anyone — So Which Celebrity Will You Make Your Voice Assistant?