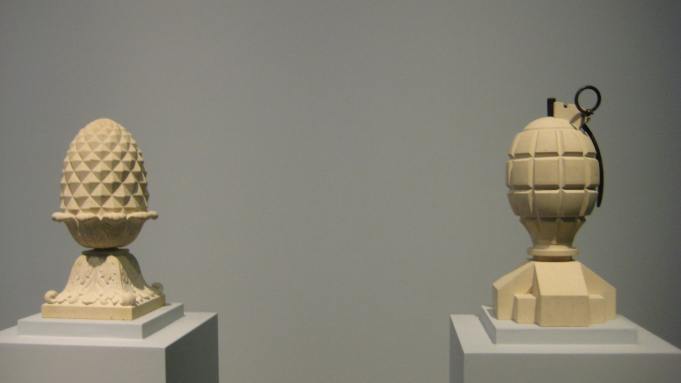 This spring in São Paulo a number of prominent exhibitions are invigorating the art scene. A Caravaggio show generates daily lines around the block at the São Paulo Museum of Art downtown [“Caravaggio and his Followers,” through Sept. 30]. The first-ever museum survey for Rio-based art star Adriana Varejão currently fills the São Paulo Museum of Modern Art in Ibirapuera Park [through Dec. 16.]. And the highly praised 30th São Paulo Bienal, “The Imminence of Poetics,” recently opened in the adjacent Oscar Niemeyer Pavilion and the other sprawling galleries of the Bienal Foundation building plus a number of off-site venues [through Dec. 9].

Curated by Luis Pérez-Oramas, the Venezuelan-born curator of Latin American art at New York’s MoMA, with co-curators Andre Sévero, Tobi Maier and Isabela Villanueva, the Bienal features some 3,000 pieces by 111 artists from around the globe. Many works were created specifically for the show. In addition, the Bienal hosts an extensive program of performances and lectures. The loose yet effectively unifying theme of poetics has apparently afforded participating artists a larger dose of artistic license than usual in big international shows.

The curators arranged the show under several sub-categories, employing broad umbrella terms like “Survival,” “Drifts,” “Voices” and “Alterforms” that make almost anything possible. Rather than a theory-driven event, the Bienal struck me as an exhibition united by the creative act, an attitude toward art making that favors hands-on fabrication, low-tech devices and a meditative sensibility.

At the exhibition’s entrance, Guy Maddin’s pulsating multi-screen video projection of archival Hollywood footage and newly minted images pulls viewers in to meander through a network of some dozen large, freestanding screens. Prominent throughout the show are interactive displays and films and videos that highlight an individual’s actions and interactions with others—or with the environment—instead of efforts geared toward more conventional narrative structures. Pioneers like Allan Kaprow and Robert Smithson are at home here. And labor-intensive pieces prevail, such as the embroidered fabric compositions by New Yorker Elaine Reichek, as well as Michel Aubry’s unforgettable re-creation of fabled director and actor Erich von Stroheim’s wardrobe-filled dressing room on the set of Jean Renoir’s Grand Illusion (1937).

The exhibition’s strengths are in sculpture, installation and video. The curators seem not to have extended their generous poetic umbrellas to painters. Compared with other works on view, most of the paintings here are lackluster and subpar. Nevertheless, there were several highpoints in the medium, and a number of them were candidates for the Top 10. Here are the Bienal standouts:

1) Ian Hamilton Finlay
The curators of this display of works by Edinburgh-based Ian Hamilton Finlay pulled out all the stops for an elaborate installation exploring the relationship between classical and modern ideals of beauty. A reproduction of a Malevich painting on one wall commands a space filled with re-creations of neoclassical sculptures, architectural models and wall texts, each with a surprising and contemporary twist, as in his row of marble architectural flourishes that evolve through several stages from pinecones of the Classical period to hand grenades of today.

2) Arthur Bispo do Rosario
A Brazilian outsider artist who deserves international attention, Arthur Bispo do Rosario (1909–1989) was diagnosed in his youth as paranoid schizophrenic. He spent most of his life in a Rio de Janeiro psychiatric hospital. There, he produced an astounding range of sewn and embroidered objects and assemblages. This jam-packed retrospective filling the largest gallery on the second level reflects a private universe to rival those of more familiar U.S. outsiders like Henry Darger and James Castle.

3) Ali Kazma
The Istanbul-based filmmaker Ali Kazma showed a series of six related short films on the subject of skilled manual labor. In this riveting display, the videos are projected simultaneously and continuously on six screens filling one large room. The videos featured close-up images of laborers at work, including a watch repairman, a taxidermist and a brain surgeon, all with an overlapping, mesmerizing soundtrack featuring live-action sounds of tools and machines in use.

4) Sheila Hicks
The meticulous weavings of U.S.-born, Paris-based Sheila Hicks seem to be everywhere lately. But I have not seen her work better illuminated or explicated than in this concise mini-retrospective. The exquisite craftsmanship of her small wall-hung pieces is further complemented here by earlier and rather gritty individual pieces and installations that clarify the conceptual aspects of her work, such as her experiments with notions of time, the archive and her relationship with Structuralism, which are often overlooked by critics.

5) Rodrigo Braga
If this commanding show of videos and photos is any indication, Rodrigo Braga, a young Brazilian artist from Manaus, has a substantial international career ahead of him. While the lush and gorgeous images of animals and still-lifes seem hopelessly romantic, a fierce undercurrent in each piece addresses a profound struggle with nature, identity and especially masculinity. One video loop, for instance, shows the artist shirtless and tied leg-to-leg to a goat, wrestling in a stark desert rock outcropping. Hopefully, neither man nor beast was injured in the fray.

6) John Zurier
At first, John Zurier’s barely-there abstract paintings seem derivative. They perhaps belong alongside the spare, abject paintings that critic Raphael Rubinstein has referred to in the pages of A.i.A. as “provisional painting.” However, the California painter’s large, wistful monochromes eventually seduce. Certain pieces, such a large (about 6-by-4 feet), deep viridian green composition, conjure a forest landscape by Casper David Friedrich. In these instances, it seems as if Zurier were fearlessly pursuing the sublime.

7) Cadu
The São Paulo artist known simply as Cadu turned in one of the most thought-provoking and entertaining presentations. A number of kinetic and interactive pieces created music. One wall is lined with what look like loops of player-piano scrolls, though made of strung-together lottery tickets with holes punched in them. Turning the handles of crude music boxes to advance the threaded loops, viewers filled the space with absurdly tinkling tunes. Another work focused on futuristic ideas for green architecture in the Amazon rain forest with a video, photos and architectural models.

8)  Hreinn Fridfinnsson
Another artist honored with an encapsulated retrospective within the Bienal is Hreinn Fridfinnsson. Born in Iceland in 1943 and now an Amsterdam resident, the artist has employed a wide range of mediums and styles over the course of his long career-painting, sculpture, video, minimalism, conceptual art and earth art, for starters. With each foray, he offered something unique to the genre.

9) Sofia Borges
At age 28, Brazilian artist Sofia Borges has already established a considerable reputation at home for large-scale photos that suggest blow-ups of Cold War-era images. Anonymous government officials and forgotten bits of archival material appear to be recurring subjects. Each image seems to be part of a tense political narrative, which may or may not exist. Borges’s exploration of the photography’s inherent ability to blur fact and fiction is a big part of the work’s appeal.

10) Thiago Rocha Pitta
At the top of one of the venue’s grand spiraling staircases São Paulo’s Thiago Rocha Pitta created an installation consisting of mounds of red earth—the distinctive, bright color of the local soil—and billowing silver flags or curtains that thrust from underground. With the show’s theme in mind, the half-buried fabric suggests a civilization imperiled by the unpredictable mutability of the earth. This work, at once majestic and abject, is emblematic of the entire Bienal.