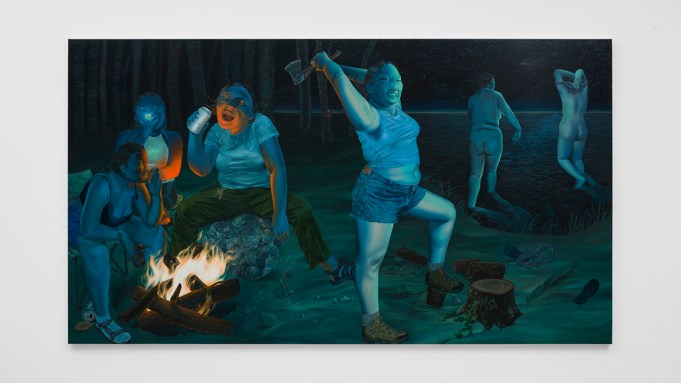 Reimagining scenes from her childhood, Sasha Gordon creates vibrant worlds brimming with quotidian details incongruous with memory’s elusive nature. Using vibrant colored pencils and neon oil paints, the Brooklyn-based painter depicts versions of herself engaging in the recreational activities typical of her suburban upbringing in Westchester County, New York. While her palette is often unnaturally electric, Gordon takes care to capture naturalistic particulars, such as delicate eyelashes and individual stitches on jeans and sneakers. Her subjects appear almost childlike, with large, glassy eyes so dilated they resemble onyx orbs set in equally round faces. Even though Gordon’s figures enjoy leisurely activities—they practice archery, play the violin, or camp in the woods—there’s a palpable sense of unease in her paintings.

Describing her experiences growing up as a biracial Asian girl in a predominantly white and heteronormative neighborhood during a virtual studio visit, Gordon told me, “Everything I did felt like I was performing for men, especially white men.” To reverse this dynamic, she populates her scenes exclusively with characters created in her own image. This means men are markedly absent. Still, her figures appear on edge with their forced, uneasy smiles, implying that they’ve nonetheless internalized the pressure to conform to a particular model of upper middle class white suburban comportment.

For her second solo exhibition, on view at Matthew Brown in Los Angeles through July 10, the recent RISD graduate implicates the viewer as the cause of her subjects’ apprehension. The show’s title, “Enters Thief,” mimics a stage command, and suggests that visitors are infiltrating a place where they do not belong—right on cue. Instead of an object, however, we steal the sense of safety and comfort that comes with privacy. Often, viewing the paintings, we find ourselves disrupting intimate moments: a shower, a romantic date by a pond.

Gordon’s new paintings contend with the psychological effects of being watched. In Concert Mistress (2021) and Sore Loser (2021), her protagonists are observed by others within the composition, and by us outside of it. In the former painting, the subject, pushed to the foreground, plays the violin to an unseen audience, her face contorted into an almost menacing grin. Behind her, a head peeps over the edge of the window, lurking. Fulfilling the model minority stereotype that expects excellence all the time, the woman anticipates being watched and performs accordingly, a sentiment Gordon shares. “I feel like I have to be a certain type of Asian woman, a certain type of queer person, a certain type of body size,” Gordon said. “I’ve always been very hyperaware, and I think that’s a big aspect of my work.” In fact, Gordon used to play the violin, but abandoned the instrument because she felt embarrassed by the stereotype of the naturally gifted Asian musician.

In a way, Gordon is making up for lost time by filling her paintings with queer Asian women like herself, people she didn’t have in her life until she entered college. And yet, her characters are unable to escape rivalries, comparison, and competition. In the diptych The Archer (2021), one panel depicts a shirtless woman pointing her arrow out at the viewer. Reflected in her left eye, we see the subject of the accompanying panel—another shirtless woman balancing a shiny red apple on her head. With a slight frown, the second woman appears forlorn and dejected as she weakly signals a thumbs-up, ignoring the arrows scattered around her feet—evidence of the archer’s imprecision. The two halves of the diptych are exhibited on opposite walls, catching viewers in the crossfire between the archer and the target. Considering the similar appearances of both subjects, the work can be read as a fight against oneself, or as a conflict between those with overlapping identities.

“There’s a wall that’s still separating me from this community,” Gordon told me, specifically referring to her “queerness and struggles with mental illness.” Oftentimes, this division manifests in her work through juxtapositions of two Asian women: one with a neon gradient skin tone and another with a more naturalistic complexion, as in Garden Troll (2021). Beneath their glossy details and tantalizing color palettes, Gordon’s scenes emphasize the difficulty that accompanies imagining utopian spaces unburdened by internalized hegemonic values. But she boldly and playfully keeps imagining nonetheless.