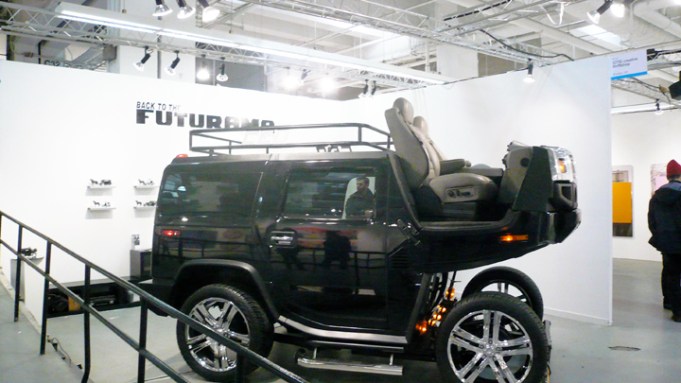 Bling, string and subversive things were among the highlights at Pulse Contemporary and Scope International, just two of the at least seven satellite art fairs that set up shop in New York the same time as the Armory Show.

Remarkably, the Brooklyn-based artist only received the green light on the project just six weeks ago, after he’d been accepted to several fairs, thanks to the advocacy of local {CTS} creative thriftshop.

Dressed to the nines, the Philippines’ notoriously extravagant former first lady, Imelda Marcos, is oblivious to the imminent disaster surrounding her—walls crumbling, kitchen fires being extinguished—in Steve Tirona’s artfully constructed digital photography, on display at the Silverlens Gallery (Philippines) booth. The iconically disgraced former first lady gazes at her dog (who has it’s own Photoshopped bling), or smiles for the photo opp. Tirona dresses his not so subtle critique in images so vibrant and campy you can’t help but smile.

At Scope, under the tall white tents in the Lincoln Center courtyard, Chinese artist Liao Yibai’s shiny, oversized accessories -a watch, a high heel and a ring playfully called Fake Ring, Pink Iceberg-compelled visitors to crouch, look sideways, and really engage with the works on all levels. Blown up to these proportions, the blinged-out accessories are scream extravagance, to the point of almost being grotesque, which makes it all the odder that one visitor proposed in front of the giant ring. “We couldn’t believe that really just happened,” said an associate for Mike Weiss Gallery of Chelsea (which showed the works).

The whir of the sewing machine never stopped at the A.M.F. Projects booth at Scope. Miami-based Daria Brit Shapiro and Karelle Levy are on a world tour for a fashion-meets-art project called KREL2go in which they make custom-fit knit garments on the fly, cataloguing the “quickie couture” pieces—made from fabrics designed by Levy, no two pieces are alike—with Polaroid photos. The growing album is remarkably egalitarian, and has all the makings of a future book (no official book deal yet). Socialites, dignitaries and pampered pets each model their garment with pizzazz. LEFT: INSTALLATION VIEW OF THE AMF BOOTH. PHOTO BY ERIN LINDHOLM

At Pulse, both Caren Golden Fine Art (New York) and Zidoun Gallery (Luxembourg) featured Devorah Sperber’s beguiling works made of hundreds of thread spools strung on metal chains. The works appear more or less abstract until you view them through one of the small, acrylic spheres set some feet back, from which they appear as iconic images like the Mona Lisa or a banana split.

At the Hosfelt Gallery (San Francisco) booth, the miniature, stoic figures of Liliana Porter’s “Forced Labor” series are at once whimsical and melancholy. Each figure is positioned next to a fabric or knit more than 100 times its size; threads trailing from the figure’s knitting needles to the fabric suggest they’ve made the whole piece. Studying the tiny installations you feel the weight of their labor. There’s a tension in these pieces between the inherent feminine nature, the tactile softness, of knit and sewn works and the underlying assuredness, the quiet confidence, these materials and techniques demand.

Brazen critics of the art establishment William Powhida and Steve Lambert dominated the booth for the Charlie James Gallery (Los Angeles). Perhaps best known for “The Special Edition” (2008), a 14-page fake New York Times newspaper heralding the end of the Iraq War, Lambert’s high-watt, blinking signage singed messages such as “Money Laundered” and “Invisible” into your field of vision, even after looking away.

On the heels of the New Museum takedown, Powhida’s gone after bigger, fatter fish: Art Basel Miami Beach. In a new work, ABMB Hooverville (2010), Powhida and Jade Townsend transform the chi-chi Miami scene into a Depression Era shantytown, with all the major players present. PICTURED LEFT, COURTESY THE ARTISTS

Powhida’s #class project—ongoing presently at Winkleman Gallery in Chelsea—was represented at Pulse with a giant chalkboard depicting the “Continuum of Emotions at Art Fairs,” featuring (hypothetical) sentiments from the public, dealers, artists, public relations and collectors. Anyone could add, erase, daydream and otherwise doodle on the board.

The most subversive work at Scope was right underneath your nose, so to speak, as you entered the airy space. New York’s Anonymous Gallery installed a mini workspace littered with itsy bitsy scraps of paper, illustrative of artist Greg Lamarche’s painstakingly detailed process. “People don’t believe that I don’t do this on a computer,” said Lamarche. “Actually, I use almost every piece.”

A scale and small “dime bags” stuffed with scraps from the artist’s workspace sat inconspicuously on the desk. They’re for sale for $10, the gallery associate said, noting that the bags are a commentary on the fact that “art is the third least-regulated market after arms and drugs.” In this case, no dark alleys are required.