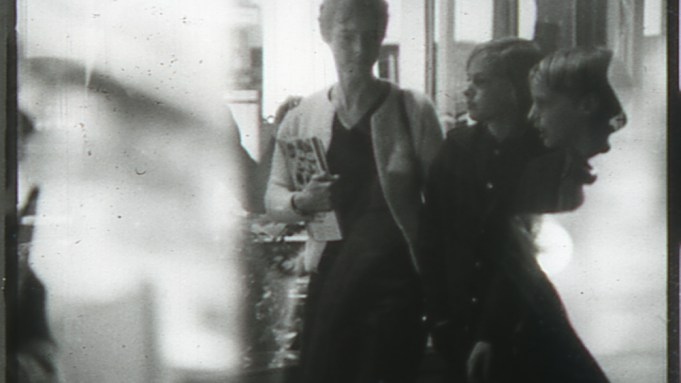 In an unscripted, journal-style audio recording made in the year before his death, Ed Emshwiller (1925–1990) half-whispers: “We loom large in ourselves and small in the universe. I guess in some ways that’s a central issue.” “Dream Dance: The Art of Ed Emshwiller”—a film series at Lightbox Film Center and an exhibition at Rosenwald-Wolf Gallery, both in Philadelphia, through December 7—introduces audiences to a dizzying array of the artist’s film and video work, as well as paintings, illustrations, and archival material, much of it attentive to this interplay between the granular and the cosmic.

After serving in World War II, Emshwiller, an academically trained artist with a talent for figurative illustration, settled down to start a family with his wife Carol in Long Island. There’s a clear trajectory from the military drawings he sketched during his time as a lieutenant to the science-fiction novel covers, tense with armed conflict, that became his livelihood (his illustrations won five Hugo Awards). From his unassuming suburban home, Emshwiller pivoted from this illustration work into the pioneering experimental film work that comprises much of “Dream Dance”—complexly layered musings on interpersonal relations, the interconnectedness of the universe, and the form of film itself. Emshwiller’s talent and vision in this medium landed him a position at the computer animation lab at CalArts; he served as dean of the film school there from 1979 to 1990.

Relativity (1966), a highlight of “Dream Dance” and illustrative of Emshwiller’s grand curiosity, presents imagery of wildlife, human bodies, and the outer reaches of the galaxy, set against a sparse, anxious soundscape. Emshwiller’s work is squarely representational: even as he explores the tension of his and others’ smallness within a vast universe with dramatic juxtapositions of scale, the human figure (with his wife, children, and other family members making frequent appearances) remains central to the frame. Dance Chromatic (1959), one of Emshwiller’s first films and Lightbox’s selection to kick off the screening series, situates the ecstatic movements of Nancy Fenster, a young dancer, against expressive painted backdrops. As Fenster moves across the screen, she slips through gaps in Emshwiller’s abstractions, which are quickly filled as soon as she moves. Emshwiller did all his editing work in-camera, a process that required mathematical precision. It’s difficult to imagine how long this seven-minute burst of color, sound, and movement must have taken him to create.

The screening series presents Emshwiller’s body of work in rough chronological order. Its selections have been vividly restored by Lightbox and Anthology Film Archives. Some of Emshwiller’s earliest forays into filmmaking on 16mm look more of this century than of the late 1950s and early ’60s when they were created; it’s easy to forget that the technical feats seen throughout “Dream Dance” are products of Emshwiller’s expert editing sense, rather than contemporary software. This bit of time travel, though, seems fitting for a science-fiction illustrator. (A whole wall at Rosenwald-Wolf displays moonscapes, robots, ray guns, and impossibly proportioned women rendered carefully and skillfully by Emshwiller throughout the mid-twentieth century.)

Despite Emshwiller’s technical prowess, his work was not able to transcend all midcentury mores. Women’s bodies dominate “Dream Dance,” appearing everywhere from book covers to feature-length films, where his camera lingers on the female form, particularly bare hips and breasts, more frequently than almost anything else. The soundtrack of Image, Flesh and Voice (1969) is not Emshwiller’s typical score of electronic stutters, chainsaws, heavy breath, and dripping water but instead a series of interviews with unpictured subjects. As women’s naked, writhing bodies come into and out of focus, we hear these subjects—mostly men—discuss the appearances and sexual appetites of women they know. While some of Emshwiller’s films are difficult to watch (flashes of light, flashes of gore), this one, with its presentation of vile sexist language, is a painful listen. It’s vexing, the impulse to apply a second-wave feminist critique of the image to work that otherwise feels ahead of its time; more vexing still to remember that the standards of whiteness and womanhood seen in Emshwiller’s work still dominate science fiction and experimental film today.

In this regard, “Dream Dance” at Rosenwald-Wolf Gallery provides some crucial context to Emshwiller’s life and artistic production. In a quiet corner of the gallery, Carol (1957) and Certificate of Appreciation to Carol Emshwiller (1975) hang side by side. The former is an oil portrait of Emshwiller’s wife, who looks stately, radiant, and mannishly handsome, even in a dress. In the frame to her right, Emshwiller has inked a certificate to Carol, noting her numerous collaborative roles in and around Emshwiller’s work: as model, actress, editing consultant, photographer, writer, and mother to the couple’s three children. She was a noted science-fiction author in her own right. The tribute to her is an unexpected punctuation mark in this wide-ranging retrospective, a funny and tender moment that is self-aware on multiple levels, acknowledging the difficulties of proper accreditation amid conventions of authorship. Ephemera, including the aforementioned recordings of his late-in-life meditations on art’s purpose, illustrate the many collaborative relationships he maintained (with the likes of Jonas and Adolfas Mekas, who posed for Emshwiller’s science-fiction covers, and Stan Brakhage, whose interview with Emshwiller occupied an entire 1973 issue of American Film Institute’s now-defunct journal Dialogue on Film), as well as the alternate universes he constructed within the environment of suburban Levittown, New York.

Throughout Emshwiller’s film and video work, illustrations, paintings, works on paper, and sculptures (painted neckties!), there is a sort of deeply compelling mania, as if he could not possibly record everything he felt compelled to in the mediums available to him and in the timespan of a life. In remarks that followed the opening screening of “Dream Dance,” Emshwiller’s daughter Susan recalled her father’s monomaniacal documentation of their shared everyday life, an object of her teenage frustration. When asked by an audience member what, of his sprawling body of work, Emshwiller was most proud of, Susan replied without hesitation, “Whatever he was working on at that moment.” “Dream Dance” is a generous foray into the previously unturned stones of Emshwiller’s personal and formal obsessions, spilling across the city of Philadelphia, between institutions and presentation formats, as productively cross-disciplinary as Emshwiller’s work itself.