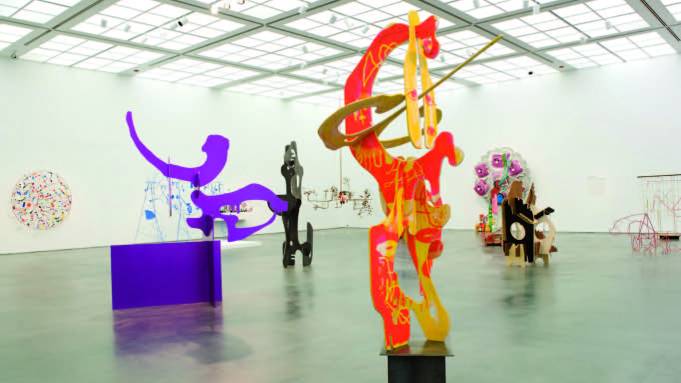 In December 2007, the New Museum inaugurated its Bowery location with “Unmonumental,” a four-month presentation of a determinedly unheroic strain of recent assemblage that embraces humble materials and low production values, the piecemeal, the contingent, the nonhierarchical. Midway through the exhibition’s run, and just a stroll away at Deitch Projects in SoHo, filmmaker Michel Gondry opened his show “Be Kind Rewind.” He re-created the derelict video store from his unspeakably bad film Be Kind Rewind, in which two buddies set out to reshoot the movies one of them inadvertently erased in the shop, using materials at hand to fashion the props and scenery. Visitors to the gallery were invited to make their own films using makeshift sets. DIY culture was ascendant on all fronts. When Gondry’s film was distributed in the UK by Pathé, it was preceded by the company’s loopily elegant logo—a metal speech bubble serving as the frame of a fishlike mobile outfitted with the letters of the company name—crudely remade for the occasion as if by the film’s daft protagonists. (Yes, it’s on YouTube.) This morsel of Pathé trivia has been willfully invoked to introduce one thread—more accurately, one wire—that connects DIY practice to a figure routinely assumed to have little contemporary traction: Alexander Calder.

Not that Calder ever sank into obscurity. Pace Gallery has shown his work faithfully since the mid-1980s; his Circus was on seemingly eternal view in the Whitney Museum lobby. If anything, Calder was rendered invisible by his very ubiquity in public collections and urban plazas. But interest has been simmering over the last few years, expressed in an array of exhibitions: “Calder, Miró” (Fondation Beyeler, Phillips Collection, 2004-05), “Alexander Calder: the Paris Years, 1926-1933” (Whitney Museum, Centre Pompidou, 2008-09), “Calder Jewelry” (Norton Museum of Art, Phildelphia Museum of Art, Metropolitan, Irish Museum of Modern Art, 2008-09), “Tanguy/Calder: Between Surrealism and Abstraction” (L&M Arts, New York, 2010). In the thick of those grand efforts arrived a small, dandy show in 2007 at New York’s Jonathan O’Hara Gallery, “Simplicity of Means: Calder and the Devised Object.” With lowly domestic objects—a door pull, a dinner bell, kitchen gadgets—the exhibition associated Calder most intimately with the DIY ethos of thrift, uniqueness and ingenuity.

Calder’s renewed pertinence is celebrated in the engaging exhibition “Alexander Calder and Contemporary Art: Form, Balance, Joy,” organized by Chicago’s Museum of Contemporary Art, which combines—or rather separates into—a comprehensive Calder retrospective of more than 50 works and a seven-person group show featuring “Unmonumental” veterans Martin Boyce, Abraham Cruzvillegas and Aaron Curry, plus Nathan Carter, Kristi Lippire, Jason Meadows and Jason Middlebrook. Catalogue contributor Brooke Kamin Rapaport raises and answers the show’s motivating question in the very title of her essay: “Why Calder is Back: A Modern Master’s Creative Reuse of Materials.” Exhibition curator Lynne Warren stipulates that Calder’s legacy is discernible in discrete sculptural objects, not sprawling installations, and that those objects are constructed, not “conglomerative.” A third feature shared by the younger group is a prevailing disregard for finish—not unlike that evinced by the jury-rigged Pathé logo.

Of course the degree of affinity with Calder varies from artist to artist, and even from work to work. Lippire, the only woman (and also the youngest of the seven, with the shortest résumé), is arguably the most tenuously affiliated. I wouldn’t dismiss her as a token, because her assemblages, while rather literal in their imagery and too axially structured to feel Calderesque, are persuasive on their own terms. Still, her inclusion does serve to keep the roster from suggesting that relating to Calder is strictly a guy thing. Middlebrook and Meadows mine the rougher bricolage side of Calder’s enterprise, using lowdown materials to make forms that range from lanky to chunky. Carter channels Calder’s love of miniaturization with an impish, shelf-size installation of Tyrolean radio transmission stations, though certain images and elements of his other works summon Miró (ladders, arrows) and David Smith (space frames, alphabet forms) more keenly than they do Calder.

Boyce’s Fear Meets the Soul (2008), a low-slung mobile that refuses to soar, incorporates an altered leg splint designed by Charles and Ray Eames and a dangling black-painted steel element, whose silhouette seems to encompass much of Arp’s abstract lexicon while evoking a shadowy silhouette from Picasso’s mid-’20s Surrealism-influenced paintings. The pendant form’s profile rhymes with the biomorphic contours of Curry’s Danny Skullface Sky Boat (Reclining), 2009, a fuchsia aluminum construction. Arpian “navels” abound, from the hole in the midsection of Boyce’s black component to the circle painted in black on Curry’s metamorphic figure and the round aperture cut in Meadows’s Artemis (2004), which further conjures Picasso’s guitar-hole-navels. The goddess’s profile in particleboard is another nice bit of Picassoism.

Perhaps because the selection and positioning of the sculpture at the MCA is so insightful, I was unprepared for the tone of the catalogue, which is laced with an almost patronizing insistence on presenting the works as being utterly transparent in aims and ideas. Warren contends that the sculpture of the younger generation has “no need for long-winded extra-object explanations,” and offers into evidence the innocent delight of children to establish that “one needn’t study the Kabbalah, plumb artist statements or manifestos, have read philosophy, delve into the psycho-sexual depths of an artist’s autobiography, or be conversant with the socio-political context of the artwork to appreciate a Calder.” In Rapaport’s words, “Today, Calder is emulated by a new generation of sculptors who find that buoyancy in sculpture is an asset, that formalism does not equal affliction, and that guileless found materials deflate the need for highfalutin theory.” It’s as if no one had read that “other” essay in the catalogue, a study by George Baker which adds Duchamp, Arp and Giacometti to the conversation, and examines Calder’s fruitful exploration of the principles of disparity and connection, of the Dada diagram and the Surrealist prop. Most of this is not child’s play.

It’s hard to argue with the contention that excessive theory can be a buzzkill in the studio and gallery (and art magazine). But the real problem, I would argue, is not an excess of art theory but the erasure of art history, collateral damage in the war against modernist authoritarianism. The problem of art history was also apparent in the presentation of “Unmonumental,” a show bent on tracing a specifically 21st-century trend that was both a statement of opposition to the craven values of the Bush years and an expression of anxiety about environmental depredation and the specter of endless war. In a jeremiad of a catalogue introduction, cocurator (with Massimiliano Gioni and Laura Hoptman) Richard Flood proclaims “formalism and traditionalism have become elite and moribund. . . . Sculpture is the medium that knows best how to live in the present and find the future.” The past? Forget about it.

As with the MCA’s Calder show, reading further in the “Unmonumental” catalogue revealed art historical connections that the exhibition in the galleries seemed to ignore if not suppress. Gioni rightly characterizes Boyce, Curry, Tom Burr, Manfred Pernice, Carol Bove and Gedi Sibony as “revisionists” who explore the legacy of modernism (though he overstates the certainty and wholeness of modernist sculpture). Hoptman begins her analysis of the works by discussing the precedents of Duchamp, Picasso, Miró, Ettore Colla, Rauschenberg and even William Seitz’s 1961 exhibition “The Art of Assemblage” at MoMA. Grappling with Rachel Harrison’s wholly considered yet improvised-looking sculpture, Hoptman calls it a “composition as sophisticated and tightly-wound as an El Lissitzky Proun.” If you’re looking in the rearview mirror for a simile, they don’t come more art historical than that.

Kiesler, Calder, Hepworth, Moore—all are cited as modernist magi for the Unmonumental generation. So in the spirit of giving, I’d like to suggest that, along with once-neglected modernist artists, we rehabilitate some of the art historians who championed them in the first place. I’m placing into consideration one of Calder’s most sympathetic interpreters (and my long-ago professor), Albert E. Elsen (1927-1995), an old-school practitioner of narrative art history who fell out of favor, charged with buying into the myth of artistic progress and the phallocentric cult of the masterpiece, though more than anything else he stood for creative individualism and the sheer necessity of independent art in a healthy society. He published a thematically organized textbook, Purposes of Art, as an alternative to Janson’s chronological classroom bible as early as 1962; in the ’70s became a pioneering advocate of artists’ legal rights; and was ahead of the crowd in his appreciation of the role played by the new medium of photography in the development of modern sculpture. Elsen was art history’s Teddy Roosevelt, with male swagger to spare and the heart of a reformer. He also was the author of the booklet that accompanied the MCA Chicago’s Calder show of 1974.

Not unlike Calder’s sculpture, Elsen’s writing—clear, fluid and unblemished by “highfalutin theory”—is easily underestimated. After noting the importance of Mondrian, Miró, Arp, Kandinsky and others to Calder’s artistic development in Paris, this is how Elsen characterized (in Modern European Sculpture, 1918-1945: Unknown Beings and Other Realities, 1979) the reason for the sculptor’s imperviousness to the anxiety of influence:

So freely did Calder acknowledge important debts to fellow artists that their number seems to exclude any room for originality. Calder’s gift was to begin where other artists left off and to draw new conclusions.

That’s not a bad standard to keep in mind as we come to terms with what a new generation is learning from the legacy of Calder and his modernist kin.