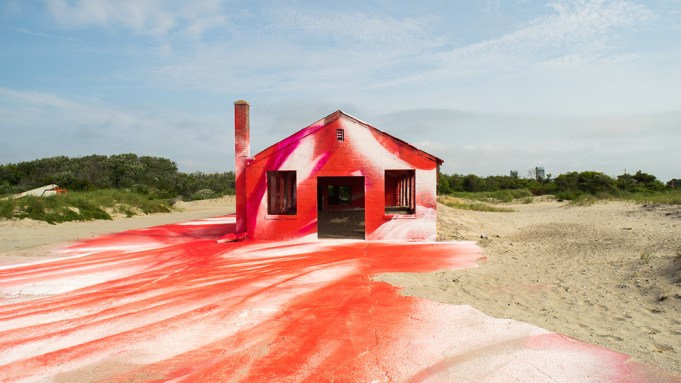 Early in her career as an abstract painter, German artist Katharina Grosse made a risky shift in her work. She exchanged her paintbrush for a spray gun and air compressor and moved off the canvas to paint, and wildly transform, architectural elements: walls, ceilings, floors, stairways, and windows. Grosse’s painting installations feature bold hues, arresting and sometimes jarring color combinations, sweeping arcs, and other shapes that counter the right angles and rigidity of rectilinear spaces. The works are animated by a go-for-broke verve. They have been exhibited widely to considerable acclaim, but not in New York—until now. Grosse’s wonderful red, white, and magenta Rockaway! is now installed through November 30 on, in, and around a partially ruined military building at Fort Tilden in the Gateway National Recreation Area on the Rockaway Peninsula in Queens.

This work is a feature presentation in MoMA PS1’s ongoing summer series of public art projects and events celebrating the resurgence of the Rockaways since the devastation of Hurricane Sandy in 2012. (Patti Smith, Adrián Villar Rojas, and Janet Cardiff are among the artists who have been involved in previous years.) Klaus Biesenbach, director of MoMA PS1 and chief curator-at-large of the Museum of Modern Art (and part-time Rockaway resident), initiated the series. In conversation it is immediately apparent how deeply he cares about the Rockaways, where he led MoMA PS1 staff in relief efforts right after the storm hit.

Grosse’s work is installed in a former aquatics building for soldiers stationed at Fort Tilden and their families. Built in 1917, the fort has fallen into disrepair since it was decommissioned in 1974 and absorbed into the Gateway National Recreation Area. Hurricane Sandy walloped the aquatics center, leaving it structurally unsound. It is slated for demolition later this year. Many of Grosse’s painting installations have been temporary, which puts her in the unusual situation of a painter of considerable stature whose major works no longer exist. In this case, Grosse has revitalized a derelict building on the fraught border between ocean and land—a stark reminder of both Sandy’s destruction and the threat of climate change looming over New York City—shortly before its destruction.

The building’s façade, roof, and interior rooms now pulsate with broad streaks, curving shapes, and swirls in varying shades of red, bright white, and magenta. These vivid colors spread outside, where they seem to jet across the sand. While this outdoor section required careful planning and laborious execution, it evokes the chance forms of windswept sand and ocean spray. It’s a good idea to view Grosse’s installation from multiple vantage points, from up close but also from afar, especially from the edge of the ocean. From the shore it becomes clear that this is Grosse’s abstracted version of a spectacular Rockaway sunset. She transmuted the aerial splendor that happens way out there above the ocean into something right here on the land. Her installation also suggests waves crashing ashore and lashing at buildings—even the tumultuous waves from Sandy that caused so much harm—but her fiery colors look festive as well as threatening. They signal fear but also buoyancy and resolve.

With acrylic paint, Grosse transformed this windowless, doorless, damaged shell of a building into a captivating artwork that involves a profound engagement with nature. As you take in Grosse’s transformative colors from the inside you are always aware of the outside, visible through the many openings where windows and doors once were: the vast Atlantic, the immense sky, and the stretching beach. Grosse’s use of the color white evokes passing clouds, whitecaps, and churning sea foam, while the comparatively subdued hues of the natural environment—tawny sand, green beach grass, the blue sky—accentuate the intensity of Grosse’s colorful installation. Her installation is a flowing exchange between the art and its powerful environment, and between the human and natural worlds.

But Grosse’s engagement with the ocean-side sublime also functions as a raucous and garish seaside attraction—a flamboyant carnival suddenly installed in the dunes. Grosse has really upped the ante of site-specific public art with this expansive work. It connects with the yearning for nature and the sea that first brought urban visitors en masse to this once-remote area long ago. It also evokes the rollicking resort and entertainment culture that once flourished in places like Rockaways’ Playland, the amusement park that opened in 1902 and thrived for decades before it closed in 1982 and was later torn down to make way for condominiums.

While Grosse’s installation is certainly brash, it is also filled with subtleties and complexities. She spray-painted much of the building, but left parts as is, including graffiti, evident damage, sections of bare wall, various scraps and tatters, and accumulated branches and leaves. The effect is a dialogue between freshness and oldness, regeneration and decay, creation and entropy. Natural light is key. The installation responds to and changes with the flucuations of daylight, growing brighter and excited, or softer and contemplative, even serene. The psychological and emotional resonance of acute colors and ever-shifting shapes is a hallmark of Grosse’s work, and it’s experienced keenly at Rockaway!, which conflates agitation and reverie, upheaval and wonderment. As you open yourself to this work, you begin to notice delightful, tender details: a few dry, dead leaves turned splendid with light tinges of pink; several rafters softly sprayed light red beneath a roof with ragged holes; a red triangular section that gently nudges cracked and weathered graffiti. Fittingly for a work that touches on themes of nature conservation—on the many efforts being made to protect the community and the fragile coastal landscape—it is an expresson of true care.