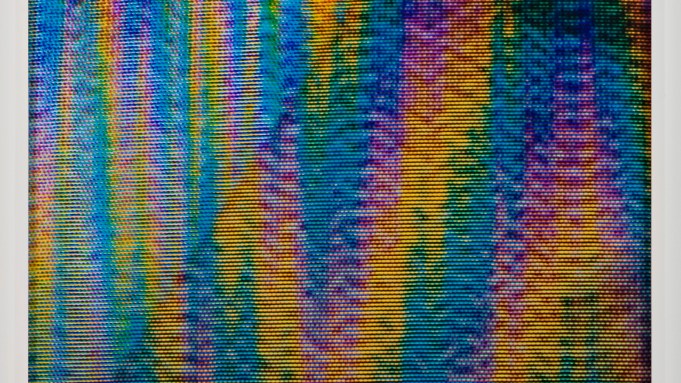 In part because of the intellectual depth of work by academic artists like Paglen and Kantor, for this year’s SECA exhibition the curators have taken particular care to build a discursive scaffolding around the exhibition, both in the gallery with a reading area, and in a full-color publication that includes a tense interview-style conversation with the artists-probing topics like representation, democracy and uncertainty. Curators Apsara DiQuinzio and Alison Gass also hosted MIT scholar and writer Caroline Jones, who delivered a densely academic lecture, in an effort to saturate the works with meaning and to underscore the artists’ shared consideration of media issues and systems-thinking.

In the gallery, Tauba Auerbach’s obsession with pattern leads to optical vibrations and Sol Lewitt-like investigations into the limits of systems. Works like Crumple I and Crumple II (2008) confuse the medium (it’s a painting that looks like print on magnified newsprint) and offers a subtle illusion of crinkled paper that fades out on approach. A series of richly colored photographs capture the blurry static of the soon-to-be obsolete analog television-bits of radiation showering down on us from the Big Bang.

Desirée Holman’s three-screen video projection The Magic Window (2006-7) is a restaging of characters from the television sit-coms Roseanne and The Cosby Show. The two families start in their respective living rooms enacting minor domestic dramas before crossing the divide of class, race, and prime-time programming to dance together in front of a green-screen. Overshadowing the multicultural mash-up, the video is made Hannibal Lecter creepy as a result of the loose-fitting skin-colored masks that represent the original casts. These disturbing  surrogates are balanced out by bright flashes of color, pastoral landscape backdrops and a glitchy dance track by Soft Pink Truth.

Jordan Kantor’s recent work speaks the nuanced language of painting while complicating the image as a visible surface. Embedded in layers of representation, Kantor’s subjects are fragments of visual history borrowed from existing media. In one painting, Kantor abstracts a reproduction of an x-ray image taken of A Bar at the Folies-Bergère by Edouard Manet. Displayed next to the painting is a lightbox with an actual x-ray of his own painting that shows stretcher bars, staples and hardware. The two works in tandem form an open-ended postulation on behalf of seeing, object-hood, and culture’s echo.

Trevor Paglen’s hybrid art practice involves deep research into our government’s secret military complex, including tracking the CIA’s program of extraordinary rendition flights and spy satellites that watch us from high above. These subjects inform an array of richly atmospheric long-distance photographs of off-limit air bases, and a long strip of enigmatic patches sourced from the U.S. government’s highly classified corner of the military defense industry, known as the Black-World. Paglen’s appearance coincides with the release of his latest book “Blank Spots on the Map: The Dark Geography of the Pentagon’s Secret World.”

Overall the exhibition is spacious but very controlled, in the buttoned-down way we expect of major institutions. And all of these artists are working with the top new contemporary galleries in San Francisco, so in this sense SFMoMA and SECA aren’t taking any significant risks. But in these precarious economic times, perhaps we would do well to appreciate the venerable 40+ year old “art interest groups” like SECA and thank them to continue.