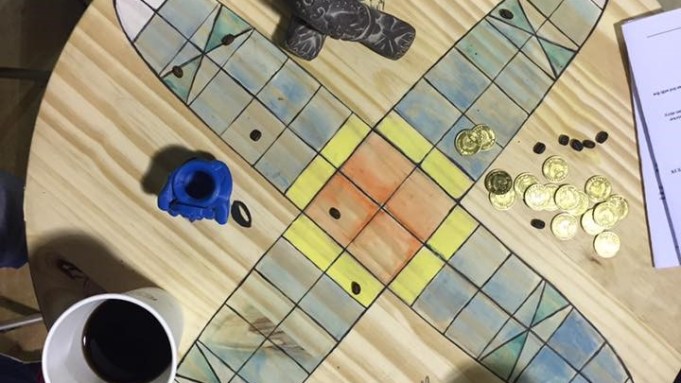 A blend of utopian aspiration and excavated indigenous tradition animates Fran Ilich’s timely project, Aridoamérica Winter Plan, an intriguing social experiment that takes the form of a free coffee shop. It is installed at El Museo de Los Sures in Brooklyn through the end of March. Visitors to Ilich’s pop up café in the storefront art space are offered hot coffee and internet access at no cost, as well as ample seating to gather with others. At first glance, the improvised social space seems simply to follow the well-trodden path of Rirkrit Tiravanija and others who have made art from feeding people in a gallery. Those that linger, however, partake in the complicated mechanics of an anti-capitalist secret society hiding in plain sight.

After handing me a second steaming cup of free coffee, Ilich invited me to play a Mesoamerican game. A café table is painted with the board for patolli, a game popular in Aztec and Mayan societies as far back as 200 BCE, and still played by among indigenous communities in Central America today. As in parcheesi, players roll dice to move their pieces out of a safe zone and around the board to get home. But, like the potlach ceremonies of indigenous people in the Pacific Northwest, patolli was a ceremonial means of redistributing wealth. Patolli players begin the game by making an offering of six personal “treasures” to the god Macuilxochitl, who is considered a participant in the game. Players roll dice to ask the god for permission to enter “the universe” of the board. Those who cannot gain entry lose their treasures, which do not immediately fall into the hands of an  opponent but instead go into a kind of community chest, from which future winning players can later choose items-gifts bestowed by Macuilxochitl.

Ilich placed a foot-tall stone statue of the god at the head of the board and explained that to understand patolli, one must first abandon Western notions of space, time, and rationality. The game’s relationship to the concept of property reflects a Mayan worldview that does not distinguish mind, body, spirit, or nature, and understands human beings as merely a physical manifestation of the mystical cosmos. Within this cosmology, a Mayan gains social capital and esteem not by hoarding wealth, but by giving it away. In front of the statue I laid my offerings: a copy of my most recent book, a magazine, a pen, a pair of cheap sunglasses, a postcard of a Kerry James Marshall painting, and a packet of napkins I’d bought from a deaf child on the subway. Ilich inscrutably matched my offerings with six metal coins, each emblazoned with a sunflower logo. I began to lose my treasures immediately, as my first rolls failed to please the god and gain my entry into the universe.

But I had to be patient. The marketplace, as reflected in patolli, is not a place of competition but a sacred space of mutual aid. As my last humble treasure, the pack of napkins, disappeared into a vitrine stocked with items the god had claimed from other café visitors, Ilich explained that curators like me have an especially hard time getting into the universe. “I’ve seen curators fail on as many as eighty offerings,” he said. “But that is because of their function, which is to facilitate the creation of work by others.”

Whether my inability to enter the universe was supernatural or merely coincidental, the prospect of a white art writer who must petition again and again in futility for permission to cross a Mayan border seemed a delicious and fitting irony. The border is a recurring theme in Ilich’s work. He has written a novel about a Tijuana graffiti crew active on both sides of the border, and in 2000 he organized Borderhack, a three-day cultural festival in the form of an illegal proto-Occupy camp at the border fence in Tijuana. Aridoamérica refers to a region spanning present-day northern and central Mexico and the southwestern United States, an area that soon may be bisected by a billion-dollar border wall. Ilich said the name of the project for El Museo de Los Sures, Aridoamérica Winter Plan, was inspired by a famous 1992 speech by Subcomandante Marcos in which the Zapatista leader used the metaphor of a great storm to describe the clash between indigenous and European cultures. Marcos said, “From the clash of these two winds the storm will be born, its time has arrived. Now the wind from above rules, but the wind from below is coming.”

At last I entered the patolli universe. As I moved the sunflower seeds used as game pieces around the board, Ilich spoke quietly but steadily about the history of Aridoamérica, a project that only seems to grow more Byzantine with each new outlandish detail. In 2005, after hearing Marcos speak in person at an international gathering of activists in Chiapas, Mexico, Ilich bought a computer to launch an independent server, possibleworlds.org, which soon hosted a series of cryptic and nearly identical websites for Ilich’s ever-expanding menu of projects. The barebones sites provide scant information to non-initiates, instead only linking maddeningly back and forth to one another, in a kind of Borgesian literary puzzle that evokes a shadowy international conspiracy. The café, for instance, is an offshoot of what Ilich calls “the cooperative media conglomerate Diego De La Vega,” which provides free coffee on request at political and community events for any group in New York. Their coffee is grown in Mexico by Zapatista coffee collectives. Diego De La Vega networks with others who smuggle the coffee in small quantities over the border into the US because the collectives are not legal in Mexico. Meanwhile, Diego De La Vega is apparently a branch of Spacebank, an independent server that Ilich created in 2005 to host an online community investment bank where members can barter goods, services, and labor, or collectively invest money in projects. For instance, a user could barter a breakfast for plumbing work. Once, the entire membership voted to invest in producing a play. Ilich tells me the bank now has hundreds of worldwide investors and assets valued at over $300,000. Spacebank has minted its own brass and zinc coins, some of which were used in our game of patolli. The “fictional currency” is called the Digital Material Sunflower. “We have hacked the laundromat vending card machines that make these, as well,” he said, showing me a Spacebank ATM card that the bank issues to its users.

Ilich said the currency’s fluctuating value is pegged to the value of his own labor on the project, but in other interviews he has claimed its value is based on the Google ranking of the Spacebank webpage or even on the Mexican minimum wage. Ilich, an early promoter of cyberculture festivals in Europe and Latin America, is a well-regarded novelist in his native Mexico and has written political telenovelas for Mexican TV. Art historian Carrie Lambert-Beatty has defined parafiction as the invention of information that comes across as fact by way of inserting the virtual into the actual and the actual into the virtual. As I tried to follow Ilich’s litany of interconnected websites and his descriptions of a currency that may or may not be real, I began to wonder if the Spacebank was a kind of parafiction, and the free café a mere plot point in a fantasy novel about a utopia to come. But perhaps this is the point. By basing his currency on rather arbitrary and arcane algorithms, cloaking it with websites that don’t provide any straightforward information about how to obtain it, Ilich reminds us of the lack of transparency at the heart of our own economy. By proposing the reinstitution of a solidarity economy predating the arrival of European colonizers, Ilich points out that capitalism is not inevitable or natural but rather just one of the many kinds of systems we use to determine what is valuable and how people should treat one another.

In an era when the reach of corporate power often supersedes the authority of national borders and laws, Aridoamérica offers a powerful vision of globalization détourned into its anti-capitalist flipside: an international network of autonomous communities. The Zapatistas began their war against Mexico on the day the North American Free Trade Agreement went into effect on January 1, 1994, and today the thirty-two autonomous indigenous municipalities of Chiapas continue to practice mutual aid, collectively self-organizing their own health care, education, and agricultural systems outside the control of the Mexican government. This spirit of mutual aid most recently sustained as well the year-long standoff to stop the completion of the Dakota Access Pipeline across tribal lands. The protest camp at Standing Rock, which came to an end just as Aridoamérica opened in December, featured the largest convergence of Native American tribes in North American history. Together, they created together an egalitarian city, its inhabitants autonomously organizing to feed, care for, and maintain the safety of a transient population estimated to have at times exceeded ten thousand.

The brilliance of Aridoamérica is its fusion of the fantasy of a vast transnational barter economy as represented by Spacebank with a real action plan. Ilich told me Spacebank’s resources have already purchased a one-bedroom apartment in the Bronx where he maintains a library, an AirBnB rental to help support the project, a patolli board, and a chest for items that Macuilxochitl has claimed from overnight guests. Ilich said Aridoamérica is now in year two of a five-year plan. The bank has purchased land in Baja California, and in the next couple of years Ilich hopes to develop the site into an intentional community. In the meantime, Ilich suggests, there is this, the winter plan: to make a space for drinking coffee, gathering, and plotting while tossing the patolli sunflower seeds.