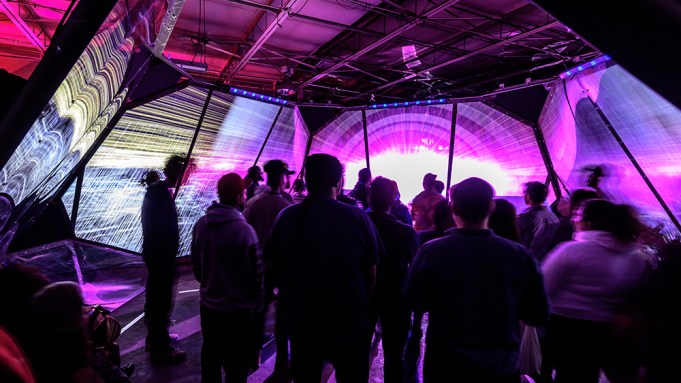 In Detroit, just north of where the I-94 freeway cuts across Van Dyke Street, neatly separating several up-and-coming eastside neighborhoods from a stretch of no-man’s-land that remains determinedly godforsaken, a message is scrawled across the side of a dilapidated garage: “they tried to bury us but they didn’t know we’re seeds.” The message and the setting are emblematic of a particular strain of resistance to Detroit’s recent comeback narrative. Out here, it is still a struggle to rend survival from the chaos. As powers that be move to reorganize Detroit, what becomes of the communities who have held it together through a time of abandonment? What becomes of the individuals who cannot conform to the new order? What place, what tools, what vestige of old Detroit, a suffering but sovereign city, remain for them?

The answer comes in the form of a story. Set in a dystopian twenty-fourth century town-a future, as with most science fiction, just far enough away to comfortably critique the present-Beware of the Dandelions tells a tale of corporate hegemony and grassroots resistance. Presenting a story arc that plays like the plot-building sequences in a video game, the animation by graphic designer Wesley Taylor recounts the Dandelion Revolution-a populist uprising that seizes control of a factory-farm village where most able-bodied citizens are locked in a cycle of indentured servitude to the “planetation’s” production of genetically modified apples. We see the townspeople, largely of color, debating whether to take radical action or try to change the system from within. We see the brutal maintenance of the orchards, where regulations reject all but the most perfect specimens, wasting the rest. A woman working the line collapses from hunger.

The story unfolds inside a 400-square-foot performance “pod”-a modified polyhedral dome, equipped with three large projection screens in the round, a surveillance camera, and an LED lighting grid. A virtuosic, hip-hop inflected spoken-word performance resonates from the speakers. “Hey,” sings Invincible “ill” Weaver, the artist who delivers the sung/spoken word aspect of the narrative, “Have you seen the apple orchards/ Where the trees are trapped and tortured/ But the captives all look gorgeous?” Each performance is interactive, calling on the audience to stand and participate, to execute physical tasks as a collective in order to advance the narrative-thus encouraging the participants to physically embody community values.

Beware of the Dandelions is the work of the Detroit-based experimental media collective Complex Movements, comprised of Weaver, Taylor, multimedia artist L05 (Carlos Garcia), and Wajeed, a music producer, sound designer, and filmmaker. Last month’s show in Detroit, which followed pilot performances in Seattle and Dallas, represented a powerful homecoming of sorts, as the group returns to present their ongoing work of linking community organizing with the performing arts and social-justice action at Talking Dolls, an experimental design studio on the east side-coincidentally (or perhaps not) in rough proximity to the garage bearing the message of the seeds.

As a project, Beware of the Dandelions exceeds the scope of the performances. The collective started developing the project in 2013. That’s because Complex Movements has put together not just a performance piece, but a mobile platform for organizing social-justice movements. While the Beware of the Dandelions live performance is a kind of fictionalized synthesis of social-justice work, there are two other forms of activity that accompany the shows-“community mode” and “installation mode.” In the former, Complex Movement’s members run workshops that they develop in partnership with artists and activists in the host city in an effort to identify, uplift, and acknowledge the work that is already happening and understand the needs of the people who live there. In installation mode, they present the stories they have gathered in the process of interacting with locals, documenting and sharing social-justice work that goes largely ignored by mainstream media. Complex Movements uses that experience to tailor performances of Beware of the Dandelions to their audience, centering story progression around the different “emblems” that appear in the work. “We come with this framework, and different emblems get highlighted based upon what the community feels like they are gravitating towards,” said Sage Crump, the show’s producer. All the emblems are based on natural phenomena, and are represented by black-and-white graphic seals. They comprise the core movement-organizing structures that Complex Movement is attempting to model. One emblem is Mycelium, the underground root structure of fungus that functions as a single, huge, highly communicative organism. For Complex Movements, mycelium symbolizes interconnectedness and detoxification. When the graphic seal stylizing mycelium’s feathered network of roots appears onscreen during the performance,  the audience members are instructed to secretly choose two other people, and physically locate themselves between their targets, until the whole room resettles into a new pattern. The challenge of executing any given task with the group leads to variations in performance time.

Other emblems are drawn from light, plants, and animals. Wavicle finds in light’s wave-particle duality inspiration for moving beyond binaries and valuing uncertainty and doubt. Starling Murmuration, after the synchronized patterns created by flocks of birds in the sky, prompts reflection on collective decision-making and collective leadership. Fern takes the plant as a model of the fractal, evocative of the application of core values at every scale of the work. Ant Colony operates as a metaphor for thinking about cooperative work, economics, and shared resources. Finally, Dandelion is a multi-layered emblem, looking at both the decentralized spread of the weed’s seeds as well as the deeply connected taproots that make it hard to displace.

Afrofuturism is popular in Detroit, where artists use its visionary combination of science fiction and Afrocentricity to address crumbling infrastructure, government control, and population displacement in this longtime majority-black city. But attention to the aesthetics of futuristic narratives sometimes means complex issues can get simplified. In its ongoing process, Complex Movements has decisively achieved something often attempted and rarely accomplished-they have created a work of social practice that simultaneously functions as an artwork, lifts up its own community, embodies its own values, and triggers actions to promote those values. Following the performance’s conclusion, audience members enter a social-justice space, where they can make buttons, connect with fellow audience members, and receive information about ongoing work happening in Detroit that correlates with their areas of interest. Nobody will exit a Beware of the Dandelions performance without access to the resources they need to connect with on-the-ground social-justice movements, where they can perhaps test out the collaborative and communication skills they’ve been taught by the module. Complex Movements has attained a tricky balance between art and activism, not with heavy-handed, didactic content, but with technological innovation, healing lyricism, and playful participation that encourages connections among the audience. In spreading their message, the members of Complex Movements are seeding a visionary future for the confluence of art and social practice. The outcome feels as effortless as dandelion seeds on the wind.