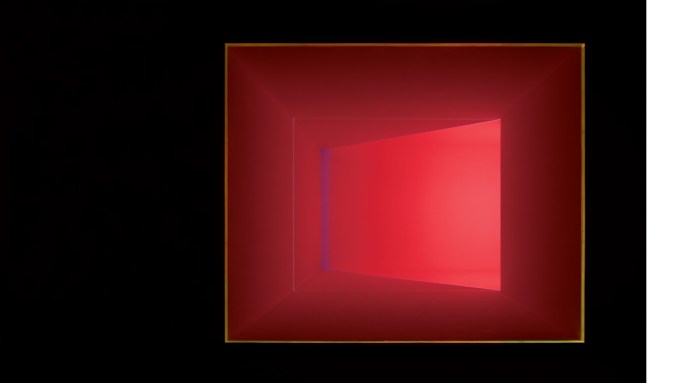 “Light and Space” has long conjured a sort of meditative bliss-bath. Yet this loosely defined Southern California art movement of the 1960s and ’70s is more challenging and penetrating than that image implies, its best works spurring a full-on recalibration of the senses. As proposed in a far-reaching exhibition currently on view at the Museum of Contemporary Art San Diego, “phenomenal” is a better term than “Light and Space”—not just laudatory but more keyed to the work’s consuming immediacy.

“Phenomenal: California Light, Space, Surface,” organized by MCASD curator Robin Clark and director Hugh M. Davies, is a major event, one of the most revelatory exhibitions within the broad array of “Pacific Standard Time” programs. The show makes it viscerally evident that to understand this work one must experience it directly. There has never before been a staging on this scale: 13 artists and nearly 100 sculptures, installations and drawings, from 1962 to 1980. The show occupies all three of the museum’s venues, and can be viewed in any order. Discrete objects and room-size environments appear at each site. Many of the works have not been publicly exhibited in decades, and the restaging of the larger installations (which typically exist in collections in the form of written specifications) is extremely rare. One such piece, designed by Doug Wheeler in 1968, had never been realized until now. Reading about the work or seeing it in reproduction is not sufficient for gaining an understanding of it—and is, moreover, challenging, given that the movement has been underrepresented in broader histories of American art of the period.

The artists themselves often posed a challenge to the writing of such a history. In 1971, for example, Larry Bell was interviewed for an exhibition of four Light and Space artists (the others being Peter Alexander, Robert Irwin and Craig Kauffman) at UCLA’s Wight Art Gallery. In the catalogue, Bell chose to have his responses printed without vowels. The logic inherent in language, he explained, disserves and distorts the sensate nature of his work. The text, as might be imagined, was largely incomprehensible, which also demonstrates something else: disorientation was central to the perceptual reorientation sought by the “Phenomenal” artists. In their installations, especially, the delivery of sensory richness was often brought about by first withholding familiar points of reference, even light itself.

The reductive strategies adopted by the artists in “Phenomenal” (those above, plus Ron Cooper, Mary Corse, John McCracken, Bruce Nauman, Eric Orr, Helen Pashgian, James Turrell and DeWain Valentine) were common enough in the ’60s, particularly among Minimalists—as were some of the industrial materials they favored. Yet Bell’s smoky glass cubes and Pashgian’s liquidlike resin spheres are indeterminate in effect, and to some extent self-negating, as opposed to the self-evident, literal objects of Judd or Morris. The materials used—many of them plastics developed within the aerospace industry—were, in fact, tasked with their own dematerialization. Because they are sleek and smooth, such sculptures were labeled Finish Fetish—although that term made the makers sound “vaguely pathological,” laments Pashgian in the exhibition’s excellent catalogue.

What justifies the grouping of these artists and their work, even more than the materials and treatments they used, is a shared intentionality. They meant to activate both light and the body, in tandem. Viewers’ movements catalyzed the physical attributes of the sculptures—translucency, opacity, reflectivity and refractivity—so the works could be seen through, or seen beyond. Attention shifted away from the discrete object and onto the visual phenomena it unspooled. While the cutting-edge mystique of the sculptures in this vein has dimmed with time, many of the pieces retain an elegance and elusiveness. A glorious cast-resin panel by Pashgian (ca. 1974) holds a breathy wisp of light in suspension. The glossy blue lacquer surface of a radiant, three-part block by McCracken (1966) seems to oscillate between impenetrable shell and porous membrane.

The exhibition’s narrative arc bends toward the increasingly reductive, atmospheric and immersive. Several compelling works represent a midpoint between the extremes of sculpted object and sculpted space: Irwin’s 1969 acrylic disk that dissolves into the supporting wall; a square, all-white painting by Wheeler (1965), its underside rimmed in neon so the canvas and its bright aura seem to hover; and an arresting 1968 work by Corse, a panel of vertical neon streaks encased in Plexiglas and suspended from the ceiling. The last is a “painting” of pure energy, flickering and buzzing by means of a Tesla coil unseen behind the wall.

In the ’60s, one fork in the road toward reduction led to the conceptualist idea, made manifest or not. Another path, forged by these artists, led to the perceptual—radical distillations of form that are nonetheless intensely optical. “Phenomenal” culminates in more than a half-dozen environmental installations in which the conditional overrides the concrete. Light and color merge with architecture, the spaces serving as pared-down theaters within which viewers conduct their own perceptual explorations.

Turrell’s Wedgework V (1975) is the most exhilarating and confounding of the large-scale pieces, never fully resolving itself in the mind or eye. Its disarmingly dark entryway scours the brain of context, scale and stability, then opens to a dim room with a large, prosceniumlike opening that frames several angled walls and another distant opening. The view seems veiled, as if by a scrim, but there is no barrier, only a textural shift in the atmosphere just beyond the framed aperture: a grainy, red-orange light that soaks the scene and lends a mysterious dynamism to an otherwise static arrangement.

In Orr’s Zero Mass (1972–73), too, the senses are stripped of bearings by an utterly dark antechamber. After an indeterminate period of time, one begins to detect a warm glow of ambient light and the suggestion of boundaries. Visual capacity gradually reboots, along with an acute consciousness of one’s own bodily presence in a space that turns out to be an oval cavity with paper walls. Zero Mass presents an exercise in elucidation by way of obfuscation.

This process of emptying out the senses in order to fill them back up with a new order of receptivity received its impetus from encounters several of the artists had with sound- and lightproof chambers used for NASA testing. In installations that they designed to be similarly subtractive, the artists scrape down experience and sharpen the sensory instruments. Their immersive environments radically extend painting into the realm of the temporal and site-specific; they straddle the minimal and the maximal. It’s hard to imagine the work of Olafur Eliasson, for one, without this precedent.

The broadly influential current that “Phenomenal” identifies streams through numerous other “Pacific Standard Time” shows. “Crosscurrents in L.A. Painting and Sculpture, 1950–1970,” the Getty Museum’s survey (on view through Feb. 5), includes a section with related work, and the museum also features separate installations of a formidable gray-resin slab by Valentine and a newly commissioned black granite sculptural wedge by Irwin. Resin discs by Fred Eversley are included, refreshingly, in the Hammer’s “Now Dig This! Art & Black Los Angeles 1960–1980” [through Jan. 8; see “Canon Busting,” this issue]. The first installment (which closed Nov. 6) of “It Happened at Pomona: Art at the Edge of Los Angeles 1969–1973,” at the Pomona College Museum of Art, included a bracing environmental work from 1970 by Tom Eatherton, with twin curving, enveloping walls of blue-violet light, and a wonderfully baffling installation using balloons, colored light, plastic and water (1969) by Lloyd Hamro. Also featured were pieces by Cooper, Irwin and Michael Asher (who is discussed at length in the “Phenomenal” catalogue, as is Maria Nordman, although both artists declined to participate in the show). Galleries throughout L.A. and the region mounted solo shows of older and newer work by Alexander (at Craig Krull), Eversley (William Turner), Valentine (ACE), Bell and Kauffman (both at Frank Lloyd). Exhibitions of recent work by Irwin (L&M), Turrell (Kayne Griffin Corcoran), and Corse, Irwin and Alexander together (Quint) attested to the ongoing vitality and relevance of intersecting fields of inquiry.

“Phenomenal” also leans effectively into the present. Surfacing at MCASD as a logical outgrowth of the museum’s long history of exhibiting and acquiring work by the artists surveyed, the show has drawn a third of its contents from the permanent collection. Two of Irwin’s installations (a scrim piece from 2007 and a partial excision of gallery windows from 1997) fall well outside the exhibition’s chronological bounds, but feel perfectly continuous with the rest—subtly jarring, revealing themselves over time and powerfully invigorating the moment.