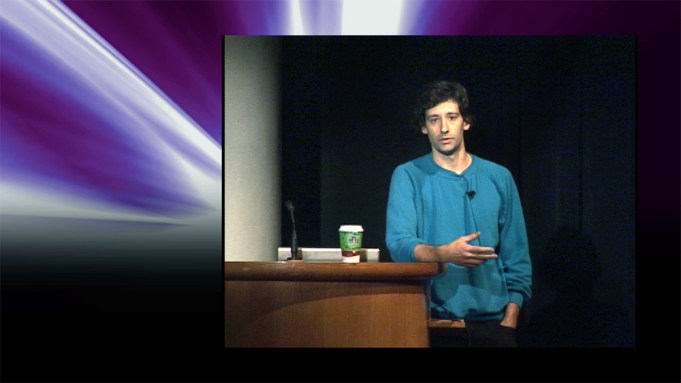 I’m watching Redistribution (2008–), a film by Seth Price. “The status of writing in the art world is very weird,” intones a cool female voice that Seth Price sometimes substitutes for his own in the voice-over. I see Price himself standing on a stage, gesturing toward a screen with abstract images that I have no context for yet and can only perceive as shape and color. “Writing confers value on the work, but itself has very little value. Writing about an artist legitimates the artist and may bring power and money, but rarely brings power and money to the writer.” I am taken away from what I am seeing, and am reminded of the conditions under which I am writing, and have been for my entire career as a critic. I’m also reminded of the voice-over in Chris Marker’s Sans Soleil (1983), where a woman with a similar alto spoke on behalf of the director. I am drawn away from the film’s larger themes and made to look at my relationship to the work, the system of art and of culture at large, my miniscule function within it. Worst of all, I’m forced to use the first person in a review. But given the self-reflexive scrutiny that is looped throughout the cultural, aesthetic, and mechanical critiques of Redistribution, this approach seems appropriate, or at least forgivable.

The digression on writing, though passionate, lasts about thirty seconds, and simply trails off. The voice-over ends as a shot of a CGI wood-paneled room with giant golden envelopes on the walls gradually fades to black, the visual equivalent of an ellipsis. After that, critics are never mentioned again. Redistribution, playing at Metrograph in New York through September 19, is comprised of many such asides that you’ll miss if you let your mind wander (again, as with a Marker film). This makes it seem ideal for viewing at home on a computer, where you can stop, go back, and watch a second time. Yet watching Redistribution at a traditional movie theater, where the image is large and information flows without interruption, adds another self-reflexive layer: we are viewing a fast-paced investigation of the mutable, translatable, and infinitely accessible nature of digital media in a context where we have no control over it.

The backbone of Redistribution is a lecture—a format that can but doesn’t necessarily resemble a movie theater experience—that Price gave at the Solomon R. Guggenheim Museum in 2007 about his work in fashion, books, paintings, sculptures, music, computer-generated animation, and videos to investigate the impact of digital media on culture, particularly on questions of authorship and narrative. In the new version debuting at Metrograph, one of several reconfigurations the artist has created since 2008, Price includes several other lectures he has delivered at art institutions—and, in one case, in a sparsely furnished bedroom. (Perhaps as a nod to complement the lecture’s pedagogical format, a Pixar-like CGI pencil family—two taller “adult” pencils and a smaller “kid” pencil—makes appearances throughout the film, as if a silent entreaty to the audience to jot stuff down; consider bringing a notebook to the theater.)

In the 2007 lecture, Price addresses the considerations and motivations behind his work, some more personal than others, while presenting the apparatuses that make it possible for him to create it. For instance, a screen capture documents the layers and tools in the software program he used to create the pencil family. Yet even the necessarily personal nature (or its emulation of intimacy) is subtly interrogated in an excerpt from the bedroom lecture/performance, a sort of proto-vlog he made in 1999. Speaking to the camera from across the room (rather than directly in front of it), Price has a demeanor that is far removed from the earnest, high-energy style of delivery that is now de rigueur on YouTube, but also dissimilar from the cool, confident, onstage presence he has in the other lectures. He admits that he feels uncomfortable addressing the camera knowing that nobody is watching, and struggles to finish his sentences. Rather than feeling more relaxed speaking to a camera inside of his bedroom, he’s more anxious and uncertain.

A lecture usually has a beginning, middle, and end, but in Redistribution Price does not provide such an arc. He is preoccupied with narrative on a semiotic rather than practical level. Early in the film, Price lays out the importance of storytelling to religion and other human quests for meaning. Later, he notes that digital media destroys continuity: “There’s no sense of time online, only the ceaseless presence of the screen. Narrative marks time, and needs time. Remove our sense of time and that’s the end of the story.” Later still, after we have seen some of his work—finished and in progress, digital and physical—Price says: “The hardest thing is to end the story. I don’t have the strength. I can’t resist tossing another story on the fire.” But then he does exactly that, reciting a folk tale of a girl nearly being cooked by a witch. It feels odd, largely because, in Price’s telling, the tale possesses a kind of circular, irresolute trajectory that he has identified as inherent to digital media.

This tension between what narrative requires and how digital media shapes information is initially presented with despair: the voice-over assures us that the inability to create meaningful relationships between two things results in psychosis, and Price shows his series of sculptures in which stills of a video of journalist Daniel Pearl’s beheading are printed on clear plastic sheets and crumpled up. Yet Redistribution’s concluding images are ultimately whimsical, beautiful, and hopeful in a way that bears no hint of cynicism: a bubble floats against a soft-focus forest background with bokeh; a girl tickles the back of her father’s head while he reads a newspaper in an excerpt from Thomas Edison’s film Little Mischief (1898); kids play on a bouncy castle in China; a small girl slowly slides down a sand dune in a desert; and finally, in close-up shots taken at a plastic mask factory, goo slides down  unnameable machines. The cumulative effect is the suggestion that whatever exists in the world can be replicated or remade into anything else and can mean anything else thanks to digital media’s potential for infinite change. Within this open system, stock photos or vacation snaps can be stripped of their social uses and simply be beautiful. Or, likelier still, they can become building blocks for the artist and viewer to build something new.

‘When You Eliminate the Wikipedia, You Arrive at the Personal’: Inside the Making of ‘Moonage Daydream’