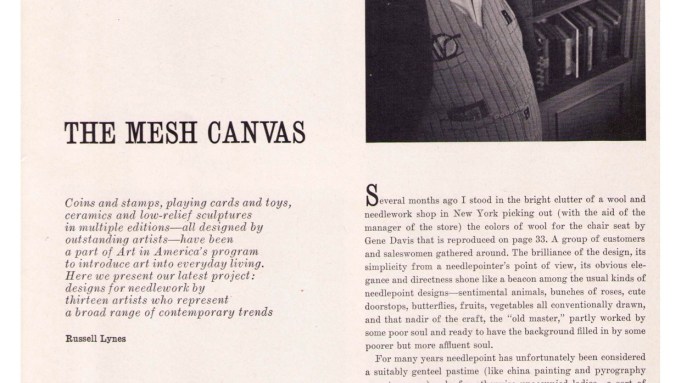 Frank Stella’s career retrospective, opening at the Whitney Museum this Friday, Oct. 30, showcases approximately 120 works, including paintings, reliefs, maquettes, sculptures and drawings, that the 79-year-old artist has produced over the last half century. In the 1960s, Stella engineered shaped canvases that reject pictorial illusion and embrace flatness, but before the age of 40 the pioneer of minimalist abstraction defected to maximalist painting-sculptures that combine myriad textures, colors and materials, their contorted layers jutting out from the walls.

These monumental—not to mention monumentally pricey—works don’t fit easily into most people’s homes, let alone the average New York apartment. Short of framing the October issue of this magazine, which features a recent Stella sculpture on the cover, an easier way to get a Stella in your house is to claim one of the 250 needlepoint kits, titled The Mesh Canvas, produced in a limited edition by Art in America and Artspace in partnership with the artist.

In the 1960s and ’70s, A.i.A. embarked on a initiated a series of commissions called “Art for Everyday Living.” Designs by artists for coins, playing cards, lithographs and children’s toys (a special Christmas venture) promoted the artistry of ordinary objects, imagining fine art away from the white cube and in the home.

Based on two paintings from Stella’s “Concentric Square” series (1961), The Mesh Canvas brings to life a project photographed in the May-June 1968 issue of the magazine. Spearheaded by art historian Russell Lynes, A.i.A. assigned 13 contemporary artists to create needlework designs, including Stella, Richard Anuszkiewicz, Cleve Gray and Roy Lichtenstein. While Stella’s original designs were stitched by Antoinette Fraissex du Bost, the wife of influential gallerist Leo Castelli, purchasers now have the opportunity to create and display their own Frank Stella throw pillows.

“We are honored to collaborate with Frank Stella on this remarkable project, over 45 years after its original inception,” said Lindsay Pollock, A.i.A.’s editor in chief. “The needlepoint pillow project is but one from a long series of artist designs the magazine commissioned during the 1960s and 1970s. These objects underscored Art in America’s mission to help make high caliber contemporary art accessible to a wide audience—a mission we still pursue to this day.”

The kits are for sale on Artspace.com and are also sold in the Whitney Museum bookshop. Each kit includes two needlepoint canvases and Merino wool thread. A reproduction of the 1968 article is also included in the kits. “Frank Stella: A Retrospective” runs at the Whitney through Mar. 7 before traveling to the Modern Art Museum of Fort Worth.