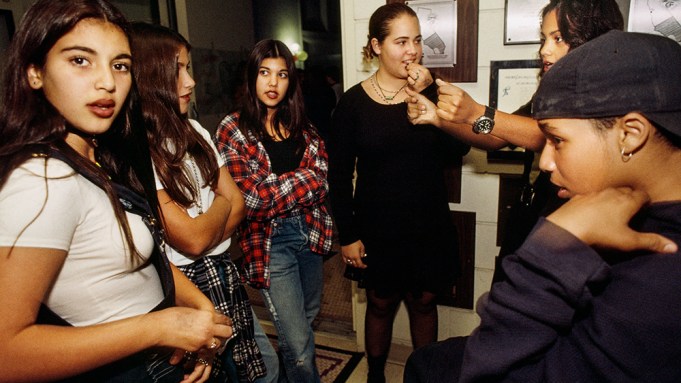 The Annenberg Space for Photography is located in Century City, a nest of skyscrapers that are home to Los Angeles’s most powerful entertainment lawyers, which makes it the perfect venue for Lauren Greenfield’s career-spanning survey “Generation Wealth,” an exhibition on view through August 13 that gives the pursuits of riches, fame, and eternal beauty their due as the epic sagas of our time.

Greenfield, a photographer and documentary filmmaker, was born in 1966, and grew up in LA around the culture of affluence that became her lifelong subject. For her first photographic assignment, she documented the Zinacanteco people of Chiapas for National Geographic. She brought the same anthropological angle to LA youth culture in her first monograph, Fast Forward: Growing Up in the Shadow of Hollywood (1997). Greenfield went on to build a significant photojournalism portfolio, and also worked in fashion editorial and advertising. In 2006 she directed Thin, a documentary on girls and body image, for HBO, and released an accompanying book of photographs.

Today Greenfield may be best known for The Queen of Versailles, for which she won a directing award at the 2012 Sundance Film Festival. The documentary drops us into the lives of time-share tycoon David Siegel and his wife Jackie as his business collapses in 2008’s stock market crash, ruining their sublimely crass fantasy homebuilding project, which is modeled partly on the Palace of Versailles. It’s a small masterpiece of tragicomedy. David tries to put a good face on things while Jackie, a shopping addict, proves incapable of adjusting to their straitened circumstances. (Since filming, Siegel’s industry has taken off again and the couple’s dream home is back on track.)

The exhibition is engaging, illuminating, and totally fun, if perhaps overly wordy. It starts with some lengthy wall texts glossing themes like economic inequality and environmental degradation—topics that are revisited by historians and cultural critics in wall texts throughout, in addition to captions explaining who is in each image and what they are doing. Still, there’s plenty to ogle: models, celebs, strip clubs, teen fantasias, and billionaire gaucherie. Greenfield’s background in fashion editorial and infectious sense of spectacle lend many of her images a dreamy, candy-like texture. There’s also an ominous feeling undercutting the pervasive opulence of the works on view. But like the goods and experiences they show, Greenfield’s images are a pleasure to consume. The people on view here are shot with compassion, even if they are too rich, too clueless, and too spectacular to be relatable.

In addition to the photographs, hung in rows of three or four, there are several video monitors with headphones showing clips, and screening areas featuring videos up to thirty minutes long. Wealth Project (2017), an introductory documentary playing in a theater near the museum entrance, depicts a cast of sympathetic characters representative who experienced hardship after the 2008 crash. Greenfield appears in front of the camera, sifting through her archives and explaining how her long obsession with glamour, excess, and inequality came into focus for her as a life project during this period. Documentary lends itself to cliché, and there are some slack ones here. Subtitles label a woman named Ilona as “Wife of Russian Oligarch,” and she fits the role to a T: a willowy, watery-blonde former model, bored with her sequestration in a gilded cage. It’s as if she cast herself.

The LA of the ’80s and ’90s that Greenfield chronicled so lovingly feels more vital than ever given our current  abundance of personal micro-documentaries on social media.  There’s a teasing, haunting innocence in her early pictures of the offspring of Hollywood’s elite at play, a mix of performed privilege and pubescent vulnerability that reminds you how the categories of “casual,” “imperfect,” or “candid” get slippery when applied to social documentary work like this. A girl poses by the pool in her nose-job bandage, a social butterfly ready to burst from her nymphet stage. Among the budding grove of glitterati we find a twelve-year-old Kim Kardashian, an image excavated from an unpublished collection of young partygoers. Standing with a group of friends at a school dance in Bel Air, preteen Kim looks preternaturally confident, alive at the dawn of her future celebrity, captured in the course of almost visible physical transformations.

Women’s and girls’ relationships with bodies are a vexed theme throughout the exhibition. Among Greenfield’s most important works is her series on the fraught lives of young girls in an image-obsessed culture. Photos taken during the filming of Thin distill heartbreaking pain from ordinary environments, like an anorexia patient in her bedroom, surrounded by Little Mermaid merchandise. The caption quotes the patient talking about how guilty she feels for the debt her parents have taken on to pay for her treatment. Again and again, Greenfield highlights the price of beauty. But perhaps she comes down too hard on girls and women trying to augment their natural allotment. Sure, the dazzlingly colorful close-up of six-year-old beauty queen Eden Wood’s stage makeup suggests a culpably deranged stage-mom. But it’s harder to tut at the twinned portraits of porn actress and sex worker Daveney, née Kacey Jordan, who attained fleeting notoriety after partying with Charlie Sheen during the actor’s well-publicized meltdown. A 2011 photo shows Daveney at twenty-two in the Peninsula Hotel in Beverly Hills, standing on a hotel bed, her tiny hips in tie-dyed boy shorts, wearing a girlish locket. In the second image, taken at the Mondrian Hotel, she’s twenty-seven, with violet hair, a teal kimono, and a conspicuous boob job. “Now I’ve become this new persona,” she’s quoted as saying in wall text. “The dream is not dead.”  If we read the first Daveney as a porn-trapped naif, her girlish, fragile body exploited by corrosive male desire, then the second Daveney is a warrior, a survivor living her best life. Greenfield’s recent work seems to acknowledge that the narrative of female desirability as a losing game, a trap imposed from without, has come to seem dated.  We’ve become accustomed to defending the sartorial and sexual choices of young women as forms of expression and empowerment.

An oddly surprising coda arrives with the show’s final documentary video and accompanying photos. Magic City (2015) explores the lives of dancers, managers, and hangers-on at the legendary Atlanta strip club of the title. In a wall text encountered near the start of the exhibition, the leftist critic Chris Hedges observes: “If you have a body that is prized, and you are willing to exploit it, the culture will reward you.” At Magic City, exploitation and reward are deliciously muddled. Of all the women on view in this show, the Magic City dancers seem to be having the most fun. “Your trap is whatever makes you money,” a dancer named Virgo explains to the filmmakers. Once you’ve figured out what your trap is, you can work it, whether it’s recording club jams or pole-dancing to them. With the flying money, lurid lights, and celebrity cameos—marble-mouthed Atlanta rap sensation Future makes an appearance—the photographs capture moments of real joy, even if the subject matter hints at the darkness of failure and poverty.

The Annenberg has a suite of programming scheduled to coincide with “Generation Wealth”, including talks from cultural critics on wealth and consumerism. In the gift shop, you can pick up a signed copy of the catalogue, a five-hundred-page doorstopper wrapped in a sensationally gilded jacket. It’s a winking emblem of excess, a $75 visual joke that visitors can plausibly afford to be in on. “My desires aren’t so excessive,” says the museumgoer, descending to a parking lot overrun by luxury vehicles, reflecting that he or she wouldn’t even know what to do with a solid gold toilet. But we should allow for the possibility that exhibitions of fabulous bad taste and Ozymandian overreach are really for our own self-satisfaction as consumers: they afford an opportunity to condemn a visible excess, and carry on participating in an invisible one.