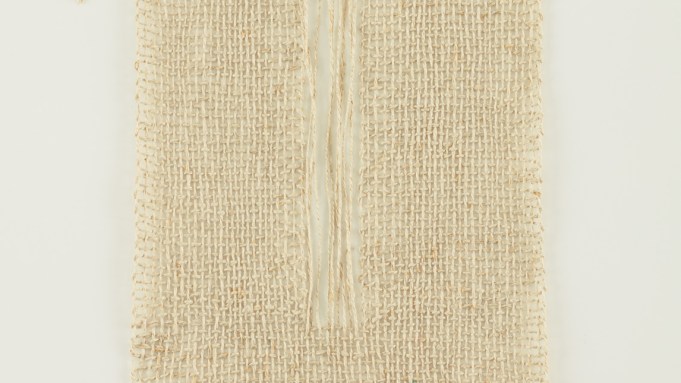 I recall a night of hot sex with a man in a Parisian hotel. The sconces above the bed were left broken.

Paris, a work by Sheila Hicks, hangs on a wall to the right of the fireplace, over my desk. The piece (10 by 5 inches, 1987) is small and sheer. See-through. It appears to be made from a single thread of natural linen (although I think it is made from two). Its two loose ends suggest that it might unravel at the slightest tug. At the center of Paris is a fragile opening, an immodest cutaway in an otherwise modest little panel. This central indiscretion consists of only eight strands of the warp, minus any weft, as Hicks reneged on continuing her weaving left and right at this slot, slit, fuck-hole. She might have posed these eight strands as some sort of coy protection or cover, but they just as strongly carry a sarcasm, as if mocking that very function. While Paris shifts between these various poles, it leaves us with the blunt image, the flimsiest excuse of a g-string, which challenges the morphological correctness of the small weaving and blurs the hard lines set by biology and the mind (and what it wants).

I bought two white washcloths yesterday at K-Mart. We called them washrags when I was growing up. I don’t know why. The term sounds odd now, postcoital, but it was not considered so then, or at least by a child. I thought of Hicks when I made the purchase. The cloths are of a scale that she frequently chooses. They serve a purpose that her small works could, too, if hers were not so mindfully made and innovatively crafted-clearly designated to transcend usage.

At her recent show in New York, I saw another small work by Hicks, called Nuit Blanche (White Night; 9½ by 5 inches, 1986) and made of linen. It has a trim waist with a broader top and bottom. At its center, there is a tiny weird vertical thing like a belt loop or an autologous skin graft. This “graft” masks something underneath, and is connected at both ends over what it hides. If I wanted to trespass the loop, I could probe behind it with three triangulated fingertips. There is something equally alluring and lawless about the possibilities figuratively built into this piece. Nuit Blanche is indeed white, but what of the night? I don’t know Hicks’s intentions, but the piece, with its provocation, leads me willingly into the dark.

In the same show—at Hicks’s gallery, Sikkema Jenkins & Co.—was a newish piece from 2009 called 14 Fentes (Slits; 97⁄8 by 53⁄4 inches), also white, also made of linen. Anthropomorphic in effect-with sensual, womanly contours-it seems endowed with polyandrous sexual capabilities. The work reads positively Hindu in its multiplicity and capacity to cherish lust, love and pleasure. But there is an undertone of pain, too, in this piece. The pathology of cutting enters faintly, but sharply. It is recognizable. And the comfort of masochism, the erotic pleasure of pain, the cult adoration of St. Sebastian, rock gently beneath the surface of this work, in which beauty and penetration are coupled. It flattens out as both relic and aseptic bandage. Simultaneously, the work articulates and aerates the wounds of the interior and the exterior, the psyche and the body.

Hicks began her studies at Yale University in 1954 and received her MFA there in 1959. She was taught by Josef Albers, among other modernists, and pursued independent study in weaving with Anni Albers. Intermittently during those years, Hicks spent a lot of time in Central and South America and incorporated the lessons of their native weaving cultures into her work.1 But there is something beyond that. Squiggle is mainly pink. It is made of silk, though you might not recognize that material because it is so raucously amped up and thickened. The piece literally bulges along its horizontal middle, like hips. Its center of taut coils is engorged with the pleasure of color: crimson, ocher or gold, a wet silver, a deep black, a honey. Those vertical squiggles are exuberantly pubic, a psychedelic frenzy of carnal vibrations. Even if I meet that passage only at a subliminal level, I know what I see when I see it.

I received a letter from an old friend yesterday with mostly good news, save for one startlingly awful detail about the health of her husband. It struck me how fragile a person is (even one who never has been so before), how delicate a relationship can be (even one that has endured) and how random the circumstances can be surrounding both.

The Evolving Tapestry: He/She (linen and silk, 1967–68) is a big work, heavy, massive, unstable. It can reach almost human height, though it is described as “dimensions variable.” It is mutable, changeable, unsettled, of indeterminate organization. It can become two discrete pieces, separate but shown together, with a resemblance to figures, abstracted. The title of the piece encourages you to assign genders to these abstractions. Inexhaustible and imprecise, the work can also be arranged as an intertwining of its constituent parts, forming a blended lump of “one” where there had been two. Shuffled, the two figures lose their corporeal integrity. A carelessness and slight malevolence creep in. Cruelty seeps out, like a vapor, but it is an acceptable level of cruelty, and in an acceptable place—where, more precisely, cruelty can be in order, or rather part of the order, and often is. Like fate. Like nature. Like people.

In a profound display of intelligence and devilish seduction, Hicks once made a wool suit of impeccable style and taste for a particular purpose. The skirt has two deep pleats running down each thigh. The jacket has three large buttons aligned vertically with much larger buttonholes. The brown buttons punctuated her neck, breasts and stomach. Her forearms and hands were bare. She made the cloth. She wove it with reference to and solid knowledge of an ancient Andean textile she had studied. The colors are umbers, one burnt and dark, the other milky and raw. The woven pattern looks like a landscape of fallow fields as if seen from the stratosphere—fields that are ripe for planting and rich with organic chemistry awaiting a reaction, a catalyst, a seed or a sacrifice.

She wore the suit to her first meeting-an interview around 1963-with Florence Knoll, a high priestess of 20th-century design.2 Hicks arrived draped in this pattern of tilled earth, cultivated in squares. Yes, as in farming, as in the pre-Columbian domestication of corn and the yam. Here was the earth mother dressed in the retrieved and rekindled skill of the Incas and their symbolic remembrance of fertile land coming to meet and embrace the elegant chill and chrome of modernism and one of its prime creators.

Needless to say, they clicked.

1 Hicks received a Fulbright to study painting in Chile in 1957, and later established weaving ateliers in Central and South America and South Africa. She divides her time between Paris and New York.

2 There was probably already the thought on both sides of applying Hicks’s insights and special gifts to Knoll upholstery and fabrics, and indeed the artist designed for the company in the 1960s.