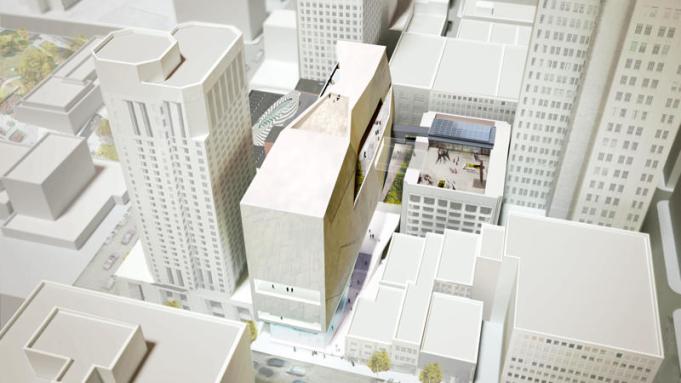 The San Francisco Museum of Modern Art (SFMOMA) yesterday revealed preliminary plans for an over 225,000-square-foot expansion, which includes over 100,000 square feet of new exhibition and education space. Slated for completion in 2016, this expansion more than doubles the size of the museum and its current exhibition, public and education space. SFMOMA will thereby become one of the largest modern and contemporary art museums in the country (just slightly larger than MOMA New York).

Last year, Oslo, Norway/New York City-based architectural firm Snøhetta was chosen as the expansion’s architect. Craig Dykers, a principal at the firm, was on hand at the museum to present the plans, which, he said, will project three central missions: to be “magnetic, generous, and transformative.”

SFMOMA is located in the densely built SOMA (South of Market) district just south of the city’s downtown. The expansion will create a “T” at the rear of the current museum location and span a city block, giving the building three street-front facades. In addition to the current Third Street entrance, the building will front Howard Street. The Minna Street facade, which currently looks over a parking lot, will be transformed into a second public entrance. This entrance will be accessible via Howard Street and the alley-like Natoma Street (currently a dead end). An open-air promenade will stretch between the end of Natoma and Howard, opening up a new mid-block pedestrian corridor and public space.

Communication between the expansion and surrounding buildings was a key consideration in the expansion plans. The roofline, which will be 50 feet higher than that of the current Mario Botta-designed museum space, features a slight off-center “V,” the intention of which is to “cradle” (as opposed to cut off, as a straight line would) and frame the monumental skyline behind it.

A defining feature that points toward creating an open, “magnetic” space is the lower level of the Howard Street facade, which will be glass-enclosed on three sides; this will give the structure an appearance of hovering above the ground. Exhibitions in this space will be visible to passersby.

No part of the expansion will touch next-door structures, to allow sunlight to fall on the promenade as well as in the street- and promenade-front gallery space.

Elements still under consideration are rooftop spaces and garden areas, as well as building materials. The proposed building material is a white treated concrete that would feature various textures and patterns. The overall proposed appearance then is clean and gently angular, featuring glass and concrete. Plans for the interior, including gallery designs, were not addressed; such information will be revealed in November.

Additionally announced was that local company Webcor Builders will build the expansion; one of the area’s largest building companies, Webcor also built the Renzo Piano-designed California Academy of Sciences in San Francisco’s Golden Gate Park and is constructing the nearby Transit Center. In addition to tight collaboration with SFMOMA, Snøhetta is also working with San Francisco-based architecture firm EHDD on this project.