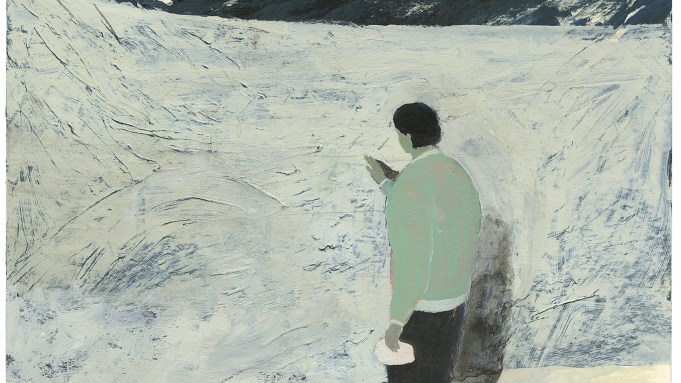 Shanghai changes so quickly, it’s impossible to keep up. Marked everywhere by rustic-seeming bamboo scaffolding, the coastal metropolis is a constant sponge for China’s rural residents, turning it into an ever-expanding behemoth—one of the largest cities in the world.

Similarly growing and changing is the Shanghai Biennale, which opened with plenty of pomp last month (on through Mar. 31, 2015). Now in its 10th iteration, the Biennale has shifted from showing only China-based artists to its current international scope; it relocated two years ago to a new venue, the outsized Power Station of Art, which became the first state-run contemporary art institution in China in 2012. It’s also become something of a lightning rod for censorship: the third Biennale in 2000 was met with a counter-exhibition by Ai Weiwei titled “Fuck Off,” which was shuttered by police; Iranian artist Barbad Golshiri wrote an open letter to the 2012 Biennale committee for censoring his work; two Chinese artists were nixed by the Ministry of Culture this year. Over the years, it has gone from colloquial art show to international event, and has become one of the most significant state-run exhibitions in the world. And in its new digs in the former power station, the Biennale is massive—about 80 artists from 20 countries fill out three floors of the nearly 452,000-square-foot building.

This year’s edition, organized by Berlin-based curator and critic Anselm Franke, is called “Social Factory,” a term that Franke loosely characterizes as a nod to the Chinese practice of social engineering to harmonious ends. The name itself invokes “workerism,” an expression that is often used synonymously with the “social factory.” The show is both slyly critical of the Chinese government’s handling of workers’ rights issues and reverent toward its ability to maintain a smoothly operating industrialism.

Franke’s Biennale centers on the historic year 1976, which marked the beginning of economic reform after the end of the Cultural Revolution, and is organized around three themes. The first is an examination of the urbanization of the Chinese people over recent decades. After a period of rustication during the Cultural Revolution, in which millions of young people were pressured to move to the countryside, in 1978 the Deng Xiaoping-led government updated the country’s economic policies to compete globally, causing those “sent-down youths” to flock back to urban centers, where money was flowing in. The 36 years of rampant urbanization since then, however, has led to an extreme contrast between rural and urban populations.

Throughout the show are nods to the people of rural China, but from urban artists’ perspectives. Hu Liu’s Xintianyou (2014) is a performance in which two men play traditional folk songs while sitting in chairs that are part of a sitting room-esque installation replete with a red carpet, desk, video monitor and photographs. The video and photographs see the artist retracing the steps of the Long March, a year-long retreat by the Communist Party’s Red Army (1934-35), and depict Liu’s visits to rural artisans, during which she trades carnations for unused bowls and vases.

Yun-Fei Ji’s 2009 scroll painting The Three Gorges Dam Migration portrays such scenes as Chinese government officials in uniform on a pontoon boat. The striking image illustrates the government’s relocation of over a million rural-dwelling Chinese to cities in preparation for the construction of the Three Gorges Dam, which opened in 2003 and would have flooded those living on the banks of the Yangtze River.

Franke ties the show’s non-Chinese artists into the rural/urban dichotomy. For example, there’s Edgar Arceneaux’s large installation The Algorithm Doesn’t Love You: From Detroit to Shanghai (2010-14), which, via tattered paintings and a maze of shambolic plywood walls, explores post-industrial Detroit—which is undergoing a sort of rustication of its own. In the press walkthrough, Franke described the flight from Detroit as a counterpoint to Shanghai’s constant influx of workers.

The second major point of the Biennale, Franke asserts, is in opposition to previous iterations. “The last nine Biennales have given a voice to the breathtaking speed of growth of Shanghai,” he said during the walkthrough. “This Biennale is different; it’s not just another picture of mega-modernization. This one is about introspection—where has modernization left the people of China?” Franke is critical of the government’s notoriously slow bureaucracy (not necessarily due to corruption, he pointed out, but owing to an unchanged system adopted thousands of years ago). For example, any of the pieces shipped from Taiwan—several arrived on the day of the opening—first had to be inspected by the Ministry of Culture in Beijing, Franke explained.

The Biennale’s third theme is the significance of science fiction in Chinese culture. Franke explained to A.i.A. that China produced very little of its own literary or cinematic science fiction until the end of the Cultural Revolution. Confucianism, which dominated pre-Cultural Revolution, is a backward-looking philosophy, and, during the Revolution years, sci-fi was avoided because it was viewed as subversive. It is now an incredibly popular genre on the mainland. (With its mega high-rises, Shanghai itself seems futuristic-parts of Spike Jonze’s 2013 film Her used the city as a stand-in for a future Los Angeles.)

One of the most striking pieces in the show is Ming Wong’s installation Windows on the World (2014). The piece is a split-screen video wall resembling a navigation display that might be seen on the flight deck of a spaceship in a ’70s sci-fi flick. The screens do show Chinese sci-fi from the ’70s, interspersed with images and sounds from 20th-century Cantonese opera, forging an improbable bond between the two (though upon closer inspection, the minimalist operas appear more ultramodern than the contemporaneous science fiction).

The notion of Communist futurism is considered in Moscow-born artist Anton Vidokle’s 2014 film Cosmos, which takes on ideas set forth by Russian Cosmo-Immortalist philosopher Nikolai Fedorov (1829-1903), whose vision of a perfect future included the resurrection of the dead and the subsequent colonization of distant planets (where would the billions of newly undead live, after all?).

Works like this wry but po-faced film highlight the fact that, like many of Franke’s undertakings (he also curated the Taipei Biennial in 2012), the Shanghai Biennale is an extremely serious affair, save for a few of the videos and the collaborative installation Robbie Williams: Solo Show (2008-14), by Iranian-born, Berlin-based artist Natascha Sadr Haghighian and Berlin-based art producer Uwe Schwarzer. For this piece, the duo invented an imaginary artist complete with a solo exhibition of the most generic contemporary art imaginable: stacks of chairs; a pile of orange T-shirts; a wall of monitors playing static. Even a serious Biennale like Franke’s needs a laugh or two.

The Biennale’s noteworthy film program, co-curated by Berlin-based filmmaker Hila Peleg, is especially powerful and diverse and offers up several revelations. Beijing-based artist Huang Ran’s Palme d’Or-nominated The Administration of Glory (2014) is a dadaist take on secret American behavioral and pharmaceutical studies such as the CIA-led mind control study MKUltra from the ’50s and ’60s. Ho Tzu Nyen, a Singaporean artist, presents a 40-minute film, Earth (Black to Comm) 2009, remarkably created in just three beautifully lit shots. The camera lingers over 50 actors, each playing a character in some classical European painting. Earth is an entrancing, moody piece that packed its viewing room on the night of the show’s opening. And not to be missed is Yu Cheng-Ta’s crowd-pleasing Practicing LIVE (2014), a reality show-style lampoon of the art world.

A note on censorship: though it was never fully addressed publicly, the curators and museum directors did acknowledge to the press that some works had been removed from the show. “There are several things you cannot address here—including a free Taiwan and a free Tibet—but reviewing [a show’s content] should be the case for every country’s biennial,” said Li Xu, Power Station’s deputy director, who curated the 2000 and 2002 Biennales. Li Xu pointed out that even the U.S. is not free from censorship: “It’s like in America, how you cannot take a photograph of a young child in the nude without it being called pedophilia, but that kind of picture is okay here.” (The recent flap over a photograph of a nude woman at the Museum of Contemporary Art Jacksonville—resulting in calls from a city councilman to defund the institution—does support his argument.)

Such problems aside, the Biennale is thought-provoking and at times powerful. Later, Franke admitted that he commissioned only a very few works in the show, something he would have liked to have done more of; but most of the exhibition came together in just six months, whereas he had over a year to work on the Taipei Biennial, in which he commissioned approximately one-third of the works. But, as Franke told A.i.A. at a press luncheon, “This bureaucracy is crazy.”