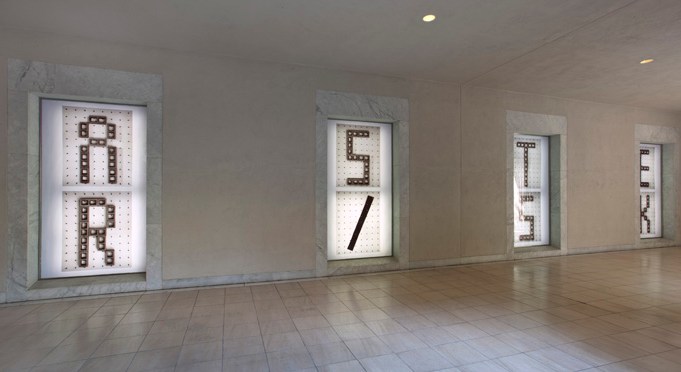 Installed in a disused lot in Culver City, California, artist Shannon Ebner’s eight-foot-tall new plywood sculpture, and, per se and, which depicts an ampersand, is a perfect addition to the Hollywood sign—a larger-than-life symbol for communion and greed alike. This, the artist’s first public work in Los Angeles, coincides with an exhibition at the Hammer Museum and inclusion in the 54th Annual Venice Biennale (which includes another and, per se and, overlooking the Grand Canal), and expands Ebner’s ongoing interest in alternative forms of dialogue.

Ebner’s show at the Hammer includes ASTER/SK R/SK R/SK (2011), a work consisting of four lightboxes, each depicting a photograph Ebner made of two letters. Together, the boxes flash at varying intervals and spell out the word “ASTERISK.” “The lighting sequence draws our attention to the syllables of the word and their various meanings-at one point, the word ‘RISK’ alone flashes,” Anne Ellegood, senior curator at the Hammer, told A.i.A. “Like Saussure, Ebner is interested in the formal qualities of language and recognizes that it is a formal system, just like the visual arts are inherently formal.”

Ebner’s investigation of meaning and form in language corresponds to inquiries made by the avant-garde LANGUAGE poets of the ’60s and ’70s, who broke apart words and phrases to find new approaches to the sound, meaning, oration and aesthetics of language. The work Ebner created for the Hammer is part of an ongoing series, “The Electric Comma,” which began as a poem that the artist herself calls a “photographic sentence.”

Ebner’s practice frequently involves her own poetic writings, which she renders as sculpture or traditional black-and-white photographs. “Ebner loves both language and photography, but she is also concerned with how both forms can easily become static,” says Ellegood. “Her work is an attempt to create a sense of movement in both language and photography by embracing ambiguity and uncertainty and by allowing one form to inform the other.” Ebner’s unique process of making sculpture, particularly public art, forces her poetry into the realm of the object, and defies the same prosaic, sculptural and image formalism that Smithson’s work contested.

“Ebner is always disrupting legibility,” says Ellegood. “She is also interested in the structure of language and how it can operate as both an object and a signifier. The photographs that she takes out in the world and the language that she uses in the works remain open and unspecific; they resist being ‘understood’ simply by an act of attempting to locate.”

This New Rye Whiskey Is Made Entirely in New York, From Grain to Bottle