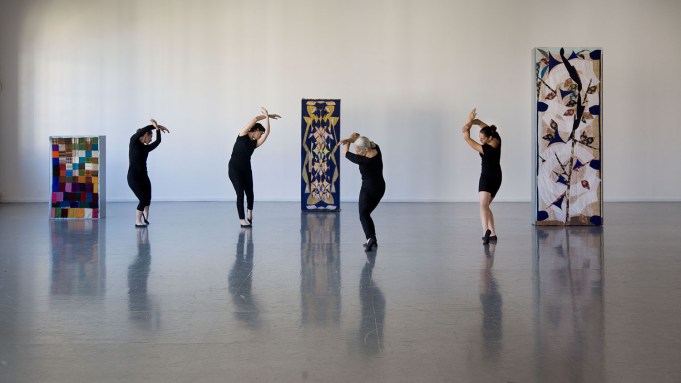 Entering the ground floor gallery of New York’s Jewish Museum, one hears the rhythmic ticking of a metronome, knocking out a precise 120 beats per minute. This sonic shoulder tap leads one into a darkened room, where five large 35mm projections depict nearly life-size dancers performing five dances, titled Duet, Fugue, Landler, Walking and War Dance. Each involves a stark sequence of slow, heavy-footed movements to the sound of the metronome—no music. “Eshkol never considered herself a choreographer,” explained artist Sharon Lockhart of Noa Eshkol, an Israeli artist who died in 2007 and whose work—which is focused on dance and textile design—has not been shown in America since the ‘60s. “She called herself a dance composer.” Thus, the movement of the dancers is stirred not by music, but by the system and language of movement itself.

The work, Five Dances and Nine Wall Carpets by Noa Eshkol (2011), is the entry point to “Sharon Lockhart | Noa Eshkol” a traveling exhibition that premiered at the Israel Museum in 2011.

The genesis of the project occurred when Lockhart traveled to Tel Aviv in 2008. Her liaison there intuited a creative connection between the work of the two artists-primarily in their dual focus on movement and postmodern dance-and proceeded to play matchmaker. “She had known Noa Eshkol, and she explained that the primary dancers who worked with Eshkol still practice at her house five days a week. I knew immediately that I had to go there,” said Lockhart.

Eshkol was the daughter of an Israeli Prime Minister but is best known as the co-creator of the Eshkol-Wachman method, a notation system for movement. “That was her primary focus-she used dance as a means for perfecting the system, both as a means for analyzing and recording movement. It’s used to monitor animal mating patterns and the diagnosis of autism in humans,” explained Lockhart. “It’s incredible that the system is used today, but not readily known in art or dance. Internationally, it’s known in science.”

In Tel Aviv, Eshkol created dance that interpreted and explained her notation system, while also developing an interdisciplinary creative practice heavily influenced by the political climate of Israel. At the commencement of the Yom Kippur War in 1973, Eshkol began creating quilt-like abstract textiles that she called wall carpets. After dance rehearsals, Eshkol and her dancers would go to the garment district in Tel Aviv and gather fabric scraps. Over Shabbat on the weekends, Eshkol would lay out different patterns, which the dancers would then pin and sew together. Eshkol saw her carpets and dance as very separate, and this exhibition marks the first time they are being shown in an art context, united with the dance compositions. Lockhart created a series of plinths with the carpets hanging over them, which serve as a backdrop for the filmed dances.

Eshkol rarely staged dance performances because, according to Lockhart, the work was about movement itself, not an event. But, due to the dedication of her dancers, the School of Eshkol remained alive after her death-though virtually unknown in the West. “[When I saw the dancers perform] I was immediately struck and shocked that Eshkol’s work had been left out of the history of dance,” said Lockhart. In esthetic and intention, Eshkol’s dance seems in line with her Western contemporaries, notably Merce Cunningham, though the work has not been cataloged or analyzed in any significant way by the established dance world. One of Lockhart’s stated intentions is to bring the work of Eshkol to a more prominent place in the worlds of art and dance.

Accompanying the films is Lockhart’s series of small, elegant gray-toned photographic prints featuring what appears to be a prototype for some unknown spherical machinery. Models of Orbits in the System of Reference, Eshkol-Wachman Movement Notation System (2011) depicts sculptural metal objects Eshkol created to give her notation a three-dimensional model. “The spheres were fabricated in the early ‘50s,” said Lockhart. “The center of each sphere represents a joint and the exterior of the sphere representing the system of reference in which all movement around the joint is contained.” The objects possess an enchanting mystery, like automatons that might truly come to life for their master. Like the once-hidden, now-discovered dance compositions of Eshkol, they flourish in the spotlight yet seem equally content with being unknown.