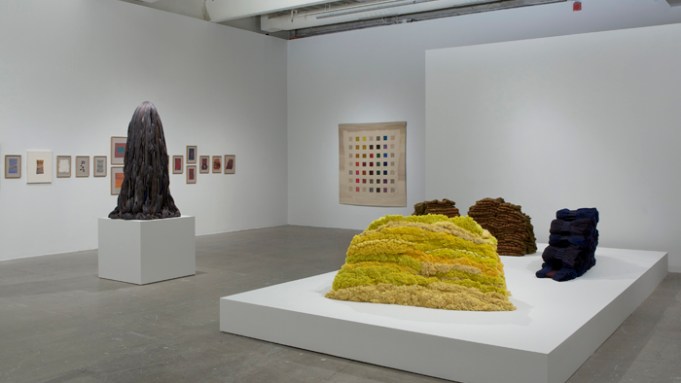 A long overdue retrospective of the work of Nebraska-born, Paris-based artist Sheila Hicks has just opened at the Institute of Contemporary Art (ICA) in Philadelphia, the second stop on a three-venue U.S. tour. The 76-year-old artist, hospitable if contrarian, was on hand Mar. 24 to welcome visitors to the well selected, 90-piece show of textile-based “abstractions,” as she prefers to call them, dating from the past 50 years.

“Time has passed and I’m oblivious to it,” the artist wrote me via e-mail—and, indeed, there is an extraordinary consistency of vigor, and freshness, to her endeavor, from start to finish. Some of the biggest, most ambitious works date to the latter part of the exhibition.

Installed in exceedingly (read: irritatingly) low light to protect the integrity of the dyes, the works range from a large group of what the artist calls “minimes”—small swatches, woven or otherwise cunningly fashioned, made during all five decades of her career, and wall-mounted in frames—to the giant (2002–03). Attached to the top corner of the high ceiling and cascading onto a low, wide plinth on the floor in a riot of color-wrapped tube forms, the work dwarfs observers.

May I Have This Dance? was added to the tour of the show, which originated at the Addison Gallery of American Art in Andover, Mass., the organizing institution [Nov. 5, 2010–Feb. 27, 2011]. Hicks commented, “That monumental work could have overwhelmed the subtle balance intended by the originating curators. Instead, I felt it reinforced and dramatized the ensemble.”

Gathered from private and public collections, the works on view are startling in their diversity. Hicks has spent periods of time in South and Central America, India and Japan, and in the textile workshops of Western Europe, yet disentangling those cultures in the works themselves is as futile as separating warp and weft. A small ginger grater from Japan, for example, crisscrossed with thread, becomes a meditation on both looms and the theme of the grid in Western art (Gingembre, 1965). One could easily overlook the artist’s genius for color in the sheer offhandedness of miniatures like La Clef (1988), in which a muddle of multihued rubber bands dangles from a key; or The Silk Invitation (1983), a 10-inch-high tangle of gossamer silk and cotton thread in Yves Klein blue. The show also includes some examples of Hicks’s commercial work; she was a design consultant for Knoll Associates for a time, and also produced decorations in white silk for the interiors of Boeing 747s, among other commissions.

Seeing these works gathered from near and far, did the artist find some surprises? “Not many,” she wrote, “and they are intimately alive for me.” With typical dry humor, she added, “If I hadn’t been handcuffed I would have liked to improve some of them.”

The largest pieces can be arranged in a variety of configurations, depending on the architectural context, while smaller works possess a cannily unfinished look, as though they are self-destructing in loose threads and open crevices. Throughout, one senses the process-based milieu of ’60s Post-Minimalism in which the artist came of age. The amorphous-seeming mound of compacted saffron-colored linen and wool in Banisteriopsis (1965–66), for example, has affinities with contemporary works by Eva Hesse—who attended Yale, like Hicks, in the ’60s. Hicks studied with Josef Albers and George Kubler, among many other luminaries, yet she was ghettoized by a critical establishment that relegated her to craft, considered an inferior pursuit. Much has changed in the past decade, though Hicks has yet to receive the credit she deserves as a barrier-breaking pioneer—at least in the U.S. This exhibition should go a long way in rectifying the neglect.

I asked the artist about the in-between character of her work—the straddling of binaries such as male/female, art/craft, monumental/intimate, Western/non-Western—which makes it so difficult to categorize. She was firm in her response: “Do you want me to de-mystify my own work? I don’t know how.”

At the opening, a beaming Michael Jenkins and Meg Malloy of Sikkema Jenkins & Co. in Chelsea told me that Hicks will join the gallery’s stable of well-known, mainly midcareer artists—from abstractionists Arturo Herrera and Amy Sillman to the installation artist Leonardo Drew. Admired by a younger generation of artists, from Kiki Smith and Robert Gober to Arlene Shechet and Sheila Pepe, Hicks may finally be mainstreamed into the contemporary art scene.

What direction will she take? “It is hard to predict,” Hicks wrote. “I am barely back in my studio and need to unpack my thoughts and spread them out for scrutiny. I spent the last two days just walking around Jardin Luxembourg in the drizzling rain.”

“Sheila Hicks: 50 Years” is on view at the Philadelphia ICA through Aug. 7, and travels to the Mint Museum of Craft + Design in Charlotte, N.C. (Oct. 1, 2011–Jan. 29, 2012). The curator at the ICA is Jenelle Porter. Joan Simon and Susan C. Faxon wrote the 256-page catalogue (copublished by the Addison Gallery of American Art and Yale University Press), with a contribution by Whitney Chadwick.