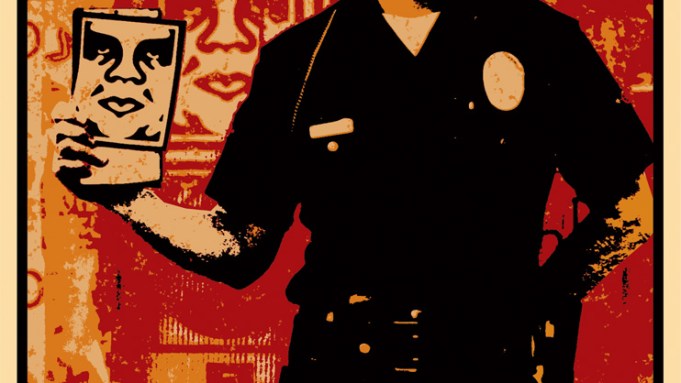 In a thank-you note written by Barack Obama to street artist Shepard Fairey for the pictorial provocateur’s singular contribution to branding his campaign for the presidency, the then senator wrote: “The political messages involved in your work have encouraged Americans to believe that they can help change the status-quo. Your images have a profound effect on people, whether seen in a gallery or on a stop sign.”1

High praise indeed from such a highly regarded public figure. But what it ultimately says—that there is a cultural equivalence between fine art shown in established venues and artistic expressions put up illegally on private or government property—represents a tacit sanction of street art from the leader of the free world that is a dramatic shift in the perceived role of art as a radical tool of social intervention.

Emblazoned in our collective mind’s eye as a defining icon of optimism and change, Fairey’s Obama Hope poster, certainly one of his most endearing and personable images, is such a signature work that the original collage was recently acquired by the Smithsonian’s National Portrait Gallery, and related images graced the covers of Time and Esquire. It is, however, not a fleeting pop-culture sensation but simply the latest crossover hit in a long line of underground classics.

Fairey has made such an indelible mark on our visual landscape that it is difficult to avoid the platitudes we might otherwise eschew in the discourse of contemporary art. As he comes under greater scrutiny from the art establishment with a major retrospective of his work, now on view at Boston’s Institute of Contemporary Art, it is worth noting that his renown has grown organically from the streets and a global youth culture that the mainstream art world has only a vague grasp of.

Fairey’s first foray into the deviant art of public interventions began in 1989, while he was a student at the Rhode Island School of Design, with a sloppy Xerox appropriation of a pro wrestler’s visage bearing the slogan “Andre the Giant has a Posse.” Intended as a homemade study of the semiotics of youth-branding and skate culture that was being co-opted by corporations, the project worked as a sticker campaign that in the end advertised nothing. Hooking the viewer with a come-on but never delivering a product, it became a phenomenally widespread inside joke that traveled around the world like some viral meme.

It may be tempting to describe Fairey’s Obama icon as the product of a very capable designer who has done exceptionally well with some standout commercial work, including the movie poster for the 2005 Johnny Cash biopic Walk the Line, a bold graphic rebranding of Led Zeppelin when the band was becoming the last of the classic rock pantheon to submit to digitization, and the current spring marketing campaign for Saks Fifth Avenue involving Soviet-style graphics on shopping bags and promotional material. Ironically, Fairey’s designs, which are often esthetic flirtations with the propaganda graphics and exhortations of communist Russia, China and Cuba, are in much demand in the corporate world, where he is given high-profile authorship rarely accorded commercial artists. But his recent status as a hot commodity in the commercial world and as a media darling (including his Jan. 15 appearance on the suitably irreverent “Colbert Report”) is incidental to his creative agenda. The success of his Hope personification is not just about design savvy; it is rooted in the artist’s uncanny ability to create visually dominating images—a capacity he gained with Andre but fully manifested with his epic and ongoing Obey street project, one of the best known and most beloved uncommissioned public art spectacles. Distilling Andre’s face to the barest graphic simplicity and juxtaposing it with the cryptic directive, the Obey project, begun in 1995, blew up the modest Andre stickers to a massive assault of wheat-pasted posters, sometimes mutiply collaged to billboard size, on daringly visible urban facades around America. Fairey understands that the loss of visual information which accompanies reproduction (particularly when you Xerox a photograph) can transform the particular into the iconic, and it is this effect that makes his Obama image so memorable. As he explains it, “My direct visual inspiration was how the Korda photograph was simplified into the iconic Che image. I lifted [Obama’s] head to give that sense of ‘I can see into the future, let me take you there,’ and divided the shading into red and blue to add that idea of political convergence. But it’s in the liberties I took with the photo to reduce it to its essence—a bit like Rodchenko, Jamie Reid’s Sex Pistols work and Fillmore poster artists like John Van Hamersveld—where it comes down to giving the right amount of visual information in the right way.”2

I’ve often heard Fairey admit that his ultimate goal, beyond his ambition on the street, is to be the author of a generation-defining image, the kind of optic trigger that Warhol’s banana cover for the first Velvet Underground record is for everyone who subsequently rejected corporate pop music in favor of archly difficult expressions. Does he think that his Obama poster has finally done that? He’s not so bold as to make the claim but acknowledges the effort. “I don’t really mind when people say I’ve been really lucky, because I have,” he explains. “But the success of this image is dependent on the context of my work.” That is, given his penchant for mass saturation and the social nature of his activities, every Fairey campaign (political or commercial) has a proven ability not just to get people to look but to buy, identify, wear, participate and spread the message, even when it could mean that they themselves might be breaking the law.

As the profile of street art rises with coverage in mainstream media and major art publications alike, with museum shows such as Fairey’s at the ICA or last summer’s problematic “Street Art” survey at London’s Tate Modern, and with wildly escalating auction prices for works by Banksy and the collective Faile, the fugitive art form clearly risks becoming the tasty new flavor of the moment. The authoritative discourse that the art world is beginning to bestow on street art smacks of a trendy fascination that is disturbingly reminiscent of the establishment’s rapid consumption and discarding of graffiti art in the early ’80s. The serious consideration afforded Fairey’s oeuvre by way of the ICA retrospective, however, is an opportunity to think about how shifting art away from sanctioned venues into the more fluid dynamics of the street can be as subversive as any twist or turn the avant-garde ever took.

“I’m a street artist, whether or not I show in galleries and museums,” he declares. “I believe in seizing public space in ways that make people question our use of it, but my art has nothing to do with the politics of street art. Much like my posters, albums, shirts or charity work, it’s really about communicating with as big an audience, with as few filters, as possible.”

Like Banksy and Barry McGee, his compatriots from the streets, Fairey now tempers his approach to the art world with the understanding that “fine art has to hold up to a closer scrutiny” than that allowed by the bustling surrounds of street art. He has been working hard toward that end, crafting with a designer’s eye canvases that mimic the compositional jewels achieved by the random layering of street posters, and abrading his surfaces as the elements would. But at the ICA he is also compelled to show the warts-and-all origins of his work in the same spirit that punk eschewed musicianship to let its audience understand that, indeed, anyone can do this. True to his mission, Fairey also traveled from his home in Los Angeles to Boston far in advance of the show to hit some 35 very visible and illegal spots in order to address an audience that might not otherwise walk through museum doors. And as one who freely admits, “In any situation I’m looking for all the angles and ways to leverage my own agenda,” he has wielded the museum’s influence to obtain legal access to a number of Boston walls, including the side of City Hall.

The verdict is far from in as to whether Fairey will be embraced by the art world to the degree he has by many other segments of our culture, but he remains the only guy I have ever known to be telling the truth when he says that, though critical acceptance would be nice, he doesn’t care about it all that much. “I’d much rather inspire a 15-year-old kid to question his government than impress the critics and collectors,” he asserts. And if people don’t get what a monumental difference there is between that and your typical artist’s ambitions, well, they just haven’t been paying attention.

1 Accessible online at obeygiant.com/headlines/check-it-out.
2 All quotes are from a Jan. 4, 2009, phone interview with the author.

“Shepard Fairey: Supply and Demand” is on view at the Institute of Contem-porary Art, Boston [Feb. 6- Aug. 16]. It is accompanied by a 449-page catalogue that is a reprint of Fairey’s 2006 book Obey: Supply and Demand, with updated material, and essays and an interview by curator Emily Moore Brouillet.

Carlo McCormick is a New York-based writer and senior editor at Paper magazine.

CEO Claire Spofford on Bringing J. Jill Out of Its Shell