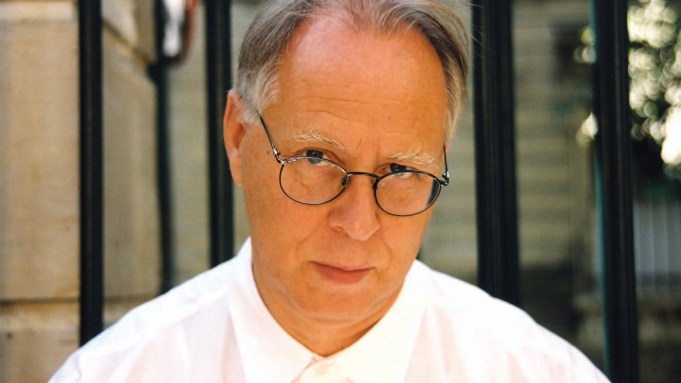 Raphael Rubinstein reflects on what he would have asked the elusive German artist, who died on June 10.

I spent much of 2009 writing a monograph on Sigmar Polke for the English publisher Phaidon. One issue that I had to resolve early on was whether I would attempt to contact Polke, to ask him questions about his work and life, to try out my interpretations. The artist, I knew, was notoriously reclusive, and even when he did consent to interviews (which was almost never: in a 50-year career he granted only a handful of them) his answers (“ripostes” would be a more accurate term) tended to be either evasive or confrontational. “Who called you and told you to interview me?” he demanded of Parkett editor Bice Curiger in 1984 at the start of his most substantial and candid interview. It’s a sign of Polke’s resistance to participating in the interpretation of his oeuvre that his only extended piece of writing on his own work (“Early Influences, Later Consequences or: How Did the Monkeys Get into My Work? and other icono-biographical questions”) is couched as a parody of conventional art history and attributed to another author.1 The other substantial artist’s statement from Polke is a crazy catalogue essay he concocted with Gerhard Richter for their two-person show at Galerie h in Hanover in 1966: the text mixes up passages from their favorite science-fiction novels with off-the-wall statements by the artists about their work. Although neither artist is credited with any particular passages, some exceptionally wacky lines about dots are obviously Polke’s: “I love all dots. I am married to many of them. I want all dots to be happy. Dots are my brothers. I am a dot myself.”

I’d heard many stories about Polke’s elusiveness. A New York painter I know told me that during a visit to Cologne in the early 1980s he had wanted to meet the artist. (Polke moved to Cologne in 1978, after spending most of the 1970s living on a rural commune outside of Düsseldorf and traveling extensively, including along the hippie trail through central Asia.) Since they were showing in the same New York gallery, he didn’t think this would be a big deal. My acquaintance conveyed his wish to meet Polke to one of the artist’s friends. A few days later, the friend came back with Polke’s response. If the American artist cared to stop by a particular Cologne bar around midnight, Polke might, just might, show up. Despite his admiration for Polke’s work, the New Yorker was unwilling to indulge him in what he saw as playing hard to get. It’s striking that even on his home turf, in the midst of a booming art center, Polke was intensely protective of his privacy.

The closest that I ever came to meeting Polke was at the opening of his 1991-92 retrospective at the Brooklyn Museum. Believe it or not, the event was sparsely attended, but Polke was there, strolling through the show with a bulky video camera on his shoulder. At one point I found myself standing in front of a large painting with Polke and a couple of artist friends. One of my friends said something complimentary and jovial to Polke, whose only response was to train the video camera on us, laugh and wander off to another part of the show.

I considered my options. I knew two of Polke’s oldest acquaintances, Franz Dahlen and Heiner Friedrich, who had mounted his first gallery exhibitions (including the 1966 show with Richter at Galerie h). I could ask either of them to put me in touch with Polke, but what would the result be? Even if the artist responded positively, which seemed unlikely, would Polke open up to me, an American critic he’d never met, after having spent his career dodging requests for elucidation? Before I reached a decision, I heard distressing news via Dahlen: Polke was terminally ill with cancer and had gone into total seclusion, inaccessible even to his oldest friends.

Word of the death, or impending demise, of any greatly admired figure always elicits a measure of incredulity. Against all logic, some part of us believes that the immortality of achievement will translate, just this once, into physical immortality. It didn’t seem possible that Polke could die, his talent and fame no protection. My mind was flooded with images of his work (including one of his most famous paintings, Paganini, 1981-83, in which a devilish fiddler attends the great musician’s deathbed) and conjured scenes of him facing his last days. Polke had recently completed two ambitious projects: the Lens Paintings, some 40 canvases, each covered with a sheet of hardened, transparent gel, grooved to create optical complexities;2 and a set of 12 large windows for the historic Grossmünster church in Zurich, an undertaking that seemed to connect with his early experience as an 18-year-old apprentice in a stained-glass factory in Düsseldorf. Would he have the strength and spirit to keep creating to the end?

Thinking about my own project, I realized that now I would have to write about Polke without talking to him. One thing, among many, I wanted to ask him about was music, in particular so-called krautrock bands such as Can, Amon Düül 2 and Kraftwerk. I saw many parallels between their music and his art. For instance, Can’s hypnotic 1971 song “Mushroom Head” seemed like the perfect soundtrack for Polke’s many druggy images of fungi. I also perceived affinities between Kraftwerk’s embrace of technology and Polke’s use of printed fabric and photography. Düsseldorf, where Polke lived in the 1960s, had been a center of krautrock. It was there that Kraftwerk founders Ralf Hütter and Florian Schneider gave their first performance at the Creamcheese nightclub, the very club whose decor had influenced the mirror and colored neon light installation that Polke and Achim Duchow made for the Münster Kunstverein in 1973. In a 2006 interview in Frieze magazine, Hütter recalls that the club was next door to the Konrad Fischer gallery, and mentions Polke and Gilbert and George as artists whose work he saw there. Members of Kraftwerk were looking at Polke, but did Polke listen to Can or Kraftwerk? Was krautrock an influence?

Maybe one day I will find out the answers to questions like these, but, alas, it won’t be from the artist himself. Not that I would have gotten straight answers from Polke, who didn’t see explaining his own work as part of his job as an artist. In this, as in so much else, he was in total contrast to Richter, whose collected statements and interviews run to hundreds of pages. Polke’s collected writings would be as slender as a first book of poetry. (It wasn’t that he had nothing to say: on the rare occasions when he did write something, such as a 2004 piece on the eccentric 19th-century British painter Richard Dadd for Tate Magazine, Polke showed himself to be an articulate and informative commentator.)

How should we understand Polke’s refusal to explain his work, to divulge his references or working methods, to share autobiographical details? Perhaps his reticence was of a piece with his modesty—not modesty of artistic ambition but modesty of conduct as an artist. Unlike so many of his contemporaries, Polke appeared uninterested in publicity and money. His life seemed to take place mostly in his studio, where he worked largely without assistants, creating a constant stream of work, much of it large scale, none of it repetitive, all of it brilliant. He turned down lucrative offers from mega-galleries, continuing to show in New York in the old-fashioned two-room town house space of his longtime dealer Michael Werner rather than in some Chelsea hangar.

Polke’s legacy is immense: he deflated the utopian pretensions of modernism, recognized the artistic potential of consumer society’s most banal products, stirred together photography and psychedelics to startling effect, mined the earth and heavens for unorthodox materials, retrieved history as a vital subject for painting, created a new multilayered pictorial syntax, reconciled figuration and abstraction, and much, much more. He also offered, in a period of unprecedented spectacle and speculation, the model of an artist who lived not for the perks of success but for the thing itself, the work of art in all of its incisive, inexplicable wonderment.

1 Sigmar Polke: The Three Lies of Painting, Ostfildern-Ruit, Cantz Verlag, 1997. Originally published in German in the catalogue for Polke’s 1976 survey at the Kunsthalle Tübingen. 2 Shown in 2008-09 at Galerie Michael Werner, Berlin and New York, and the Arts Club of Chicago.