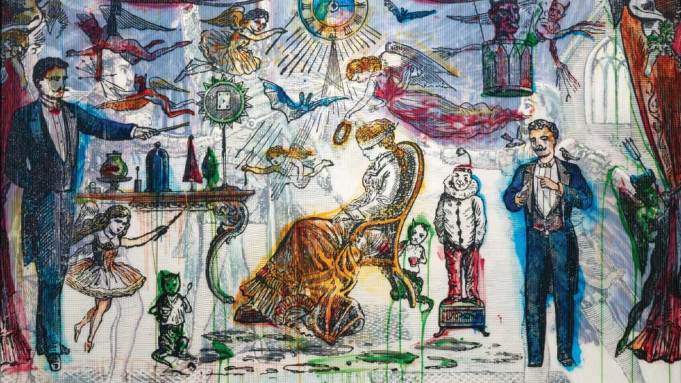 IN THE COURSE OF producing three large lightbox works commissioned for the 1999 reopening of the Reichstag in Berlin, Sigmar Polke started experimenting with various mediums that would allow him to paint on them while being transparent to imagery over which they were applied. After a year and a half, he and his assistants arrived at a polymer gel that could hold its shape when combed into lenticular ridges. Usually he orients the corrugations vertically, like massive blow-ups of the plastic ridges that animate optical “3D” postcards, allowing butterfly wings to flap or Jesus to move on the cross.

The 26 “Lens Paintings” (2006-08) shown at Michael Werner Gallery in New York this spring (40 were exhibited earlier in 2009 at the Arts Club of Chicago) cause nothing so perceptually dramatic, though the images do change as you move from side to side.

The separate rivulets of paint that run down each face of the vertical ridges and deep in their troughs come alternately into view as you shift from one perspective to another. And the milky transparency of the polymer allows the painted and collaged image surface beneath it to be visible. The combined effect is of a chilly dimensionality, like leaves and newspapers (and, perhaps, bodies) trapped in ice, an effect not illusionistic but rather concrete, as of physical presence. Competing worlds of simple optical manipulation and magical rites, of department-store printed patterned fabric seen through the gel and freely poured paint applied to its front, are overlaid, the medium that seals them together also holding them apart. The result is a treatise on the contingencies—the partial failings, and also the subjectivities—of vision. It is plenty. In fact, one of Polke’s most important themes is plentitude, with its promise of fulfillment on the one hand, and threat of excess on the other.

The imagery in the new paintings constitutes a sort of summa of Polke’s work, reprising the casual paint pours and loose, sketchy brushwork; figures blown up from cartoons and photographs; collaged, printed fabrics that burlesque geometric abstraction or portray cartoon ghosts; and engravings from the 17th through 19th centuries. In the aggregate, they explore an uneasy space shaped by optical illusion and multiple viewpoints, and furnished with a supernatural congregation of angels, devils (and devil cats), imps and ectoplasm. A number of paintings, collectively titled “Seeing Rays,” draw from a 17th-century engraving by the scholar and cleric Johann Zahn that depicts two gentlemen observing the sky from different vantage points. Lines emanating from their eyes fan out into the heavens—or draw them back into each eye as a vanishing point. In some examples, Polke shows the two men gazing at a dragon that is in the original engraving, while in others the dragon drops out entirely, or streaks across an astronomical firmament printed on fabric to which the gel is fixed. Polke photocopied the engraving from Zahn’s 1685 book, Oculus Artificialis Teledioptricus, sive Telescopium (The Teledioptric Artificial Eye, or Telescope), and the figures were drastically bent or stretched as he manipulated the reproduction in the copying process.

Zahn invented a portable camera and conducted several experiments on the optics of multiple viewpoints; his engraving, an early form of mechanical reproduction, is a diagram of embodied reality (the two men) gazing at myth (the dragon). Nonetheless, it is several steps less mediated than Polke’s painting of a projection of a manipulated copy of an engraving. Polke has been severely nearsighted since he was four (he has worn eyeglasses for most of his life) and dates his interest in optics to his childhood.

THE ILLUSIONIST (2007) was the exhibition’s showstopper, a large work in which two Victorian magicians conduct a séance with a blindfolded woman seated between them. The performance seems to be under siege by devils and their retinue, as well as at least one angel. The woman’s role is ambiguous. Is she an assistant, a member of the audience, a client? Whatever her primary role, she is also a conduit for the otherworldly population. Behind the polymer surface, another reproduced and manipulated engraving depicts three men in 18th-century dress with drawn swords.[pq]The milky, combed polymer allows imagery beneath to be visible, like leaves and newspapers (and, perhaps, bodies) trapped in ice.[/pq]The two men flanking the central figure touch their swords overhead, striking a metaphysical spark that shoots out rays similar to the sight lines emanating from the figures in the “Seeing Rays” series. Meanwhile, the center figure points his sword down, where it passes through the body of the seated woman on the surface of the gel, causing no apparent harm. As in a ghost story, the two events happen in the same location but at different times, the more recent activity overlaying the residue of the earlier event. The figures and furnishings of both images preserve the clotted black line of the engraver. Whatever color is present in the painting is the product of luminous stains, evoking similar color stains on the glass slides used for traditional magic lantern demonstrations.

Polke’s stains allude variously to abstract gesture, fogs of colored light, ghostly plasmas and bodily fluids. The last is uproariously evident in a number of large untitled paintings where pours of white paint spill like giant ejaculations across the other pictorial goings-on. The sexual connotations are underscored by a connection easily made between bedsheets and the printed fabric underneath the gel surface in several of these paintings. In one work, the white spill is a centrally positioned phallic tower that spews a fluid cloud to the right. Polke’s enactmentof the artist as the generative and controlling Father might be offensive if the paintings weren’t so beautiful, and so funny. The glowing white flow is also a kind of rapturous parody of the ectoplasm said to have been captured by cameras when spirit photography was at
its turn-of-the-century peak.

TAKEN TOGETHER, the “Lens Paintings” recall at least two other bodies of work by Polke. One, called the “Transparents,” is a group of images painted on one side of a lacquered silk that allows limited light and the ghostly silhouettes of images to pass from one side to the other. Presented in freestanding frames, the series was exhibited at Mary Boone in 1989.[pq]Polke’s stains allude to ghostly plasmas and bodily fluids, as when white paint spills like ejaculate across the other pictorial goings-on.[/pq]The other, an extended cycle of paintings of the late 1980s and early ’90s titled “Laterna Magica,” is also executed on lacquered silk, though these are mounted like windows in multiple wood panels that are hinged to each other as decorative screens; some are set up in spiraling configurations. In both cases, the paintings can be viewed from two sides, which is not possible with the wall-hung “Lens Paintings.” In their construction, the “Laterna Magica” works are the forerunners of the Reichstag lightboxes, themselves precedents for the “Lens Paintings,” which can be seen as boxes with their backs to the wall.

Of course, the box is one of a magician’s most important props, a place where an exchange occurs out of sight. Freud would have had a field day, which the artist would invite. At the same time, Polke geekily enjoys the technology of old-fashioned magic, and his paintings celebrate its rickety evocations of the supernatural. But more than a magician, he is what in earlier times might have been called a mage, a figure who presides over magic both as a worldly enterprise and as a doorway to suppressed or otherwise unavailable alternate realities. The mage is familiar with the complex physical operations of the perceived world but is wise enough to acknowledge the extent of what he doesn’t know and can’t explain.

I never get the sense that Polke is cynical about either his source material or the practice of painting. He is a great, loose draftsman, but a greater collagist, less interested in the body than in the machines that reproduce its image, and apt to disappear into his materials and processes. If Picabia is Polke’s great model, Polke surpasses him as a painter. He is a postmodernist, to be sure, but he is also, with his sustained belief in the regenerative powers of painting, a post-Dadaist. There are many ghosts in the machine of his art, and they can manifest themselves most unexpectedly.

Stephen Westfall is an artist and writer currently living in Rome.

Turn Your Kid Into a DIYer With Free Building Kits