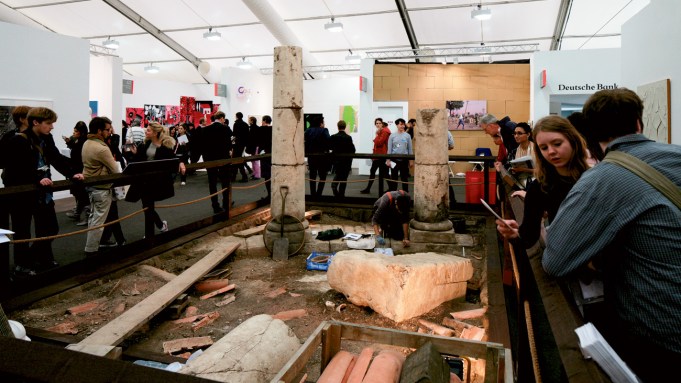 “CECI TUERA CELA” (this will kill that), declares Claude Frollo in Victor Hugo’s The Hunchback of Notre Dame, gesturing to a book and then to the cathedral, predicting that the more mobile, less labor-intensive prouct of print would replace architecture as the record of human thought. In recent decades, of course, there has been a revolution at least as radical as that brought about by Gutenberg, with digital technologies outstripping even the most mobile of analog means. As 28-year-old artist Simon Fujiwara shows us, however, the physical monument has proven surprisingly resilient. Bringing together installation, performance, video and text, Fujiwara uses monuments as conceptual anchors for his practice, but in ways that reflect a contemporary culture enamored of its own dematerialization.

Fujiwara centered his current installation at Manifesta 8 in Murcia, Spain, on a single monument whose existence is disputed. A decade ago, four British museum-display artists, while on site during the excavation for an art center in the Arabian Desert, witnessed the discovery of a 25-by-10-foot pre-Islamic pillar. It might have been a phallic object of worship, or it might have been a broken column. Either way, it disappeared from the warehouse next to the archeologists’ tearoom soon after being found, provoking a string of conspiracy theories and charges of censorship. Or so the story goes, according to one of the men presented as the witnesses in Fujiwara’s installation, punningly titled Phallusies, and its documentary-style video; another denies finding anything at all; yet another disputes the first speaker’s critical capacities, while making an obliquely homophobic remark: “I think that says a lot about [him] actually. He’s clearly unstable. . . . I wouldn’t want to be locked in a room with him at all.”

IN FUJIWARA’S WORK, the dubiousness of the art object is best conveyed via performance. Frozen (2010), a site-specific installation at London’s Frieze Art Fair that marked the artist’s receiving of the Frieze Foundation’s Cartier Award, made use of that paragon of unreliable narration, the tour guide. The guide here shuttled small groups of people around six “excavation sites,” unearthings of what was referred to as The Frozen City, which had supposedly once occupied the same site as the fair in Regent’s Park. Some of these sites seemed to erupt into the fair, and were roped off; others were underground and visible through Plexiglas. Signs accompanying the displays explained that this city flourished during an otherwise undocumented, decadent period between 80 and 200 a.d., after the Roman retreat from Britain and before Christian moral and political subjugation (another instance of Fujiwara’s playing with history, since these years in fact fall squarely within Roman occupation). The recovered sites were a patron’s home, a brothel, a marketplace, a dead artist’s crypt and a restaurant (located adjacent to the fair’s cafeteria). It is assuredly not lost on the artist, who was trained at Cambridge University as an architect, that this allegorical, simulated city recalls the life-size re-creations of a natural history museum. Fujiwara eschews fully immersive environments. His installations keep the viewer at a distance and are positioned within—or, in works like Frozen, appear to be the literal foundation of—a larger structure such as a fair or a biennial, the artist aligning those venues with themes of entertainment, tourism and the exotic.

As with many aspects of Fujiwara’s work, the strategy of constructing a place within a place—of creating within a particular environment a more private meeting ground for people operating in the bourgeois milieu of art—is rooted in his own biography. The artist is half-Japanese and half-British, and a sense of cultural dislocation, combined with a related sensitivity to conditions of economic inclusion and exclusion, pervades his work. From the artist’s multipart “Welcome to the Hotel Munber” project (2008-), we learn that his parents ran a hotel in Catalonia in the early ’70s, under Franco’s repressive regime. At Art Basel last summer, Fujiwara presented an installation re-creating the hotel bar: a masculine room featuring dartboards, lacquered cherry-wood surfaces, barrels used as tables and cured meats hanging from the ceiling. Yet as with the workshop in Phallusies, the latent homosexual themes of this macho environment were brought to the surface, the walls hung with images of naked men, their private areas concealed by oriental fans.

At no point in Fujiwara’s work are we expected to know definitively what is truth or fiction. Like archeology, autobiography is for Fujiwara a discipline ripe for creative manipulation. Within the Welcome to the Hotel Munber installation, the artist enacted a performance detailing his attempts to write a fictional, homoerotic autobiography as his father, Kan Fujiwara. In the story, excerpts from which the artist recited in the performance, the narrator discusses the frustrated eroticism of the bar, which was populated by military personnel, one of whom forces him to sniff a rifle—an act which, in the end, serves as foreplay. The narrator (Fujiwara as his father) later explains that this episode can be considered a metaphor for Franco’s regime at large—with its sporadic violence and sexual authoritarianism—and goes on to relay other, more publicized anecdotes from the country’s sexual history, including for example, Franco’s having only one testicle, and Dalí’s masturbatory practices.

Fujiwara then, speaking as himself in the performance, expresses his hesitancy about “sexualizing” the “true life biography” of his parents. “What is it about using your family sexually that I felt so uncomfortable with?” he asks. “How do sons relate to fathers sexually?” Indeed, his homoeroticization of his father evokes that most taboo of taboos, incest, and speaks to a conflation of the Oedipus Complex and the Electra Complex. Thinking like a psychoanalyst, Fujiwara traces various of his childhood traumas back to an early point in sexual development, concentrating on the moment at which “a penis comes out of a vagina”—an interpretation that differs markedly from the traditional psychoanalytic binary of presence and absence, of male “castration anxiety” and female “penis envy.” Through such variations of Freudian doctrine, Fujiwara again adopts rigorous techniques for the purpose of foregrounding absurdity.

IN FROZEN, Fujiwara casts other people as the agents of his authorial voice, although in the dead artist’s crypt he makes an appearance as a skeleton, fabricated to the size of his body and laid under Plexiglas with a tablet inscribed with self-portraits in various styles, 500 Roman coins and a large knife stabbed into his skull. Positing as equally possible the artist’s murder and a Dorian Gray-like suicide, Fujiwara brings together various narratives in the form of artifacts. This sense that history is written through acts of both remembering and forgetting (and that what is forgotten is often that which is not heteronormative) is shared by Berlin-based artist Henrik Olesen. In his 2009 catalogue Some Faggy Gestures, Olesen presents, in the format of a history textbook, underrecognized examples of homoeroticism in visual art. Both artists insist that cultural narratives are incomplete for being heteronormative, and both are keenly aware that history is often uncritically consumed—accepted as it is remembered.

Fujiwara emphasizes the role that subjective interpretation plays in histories both personal (“Welcome to the Hotel Munber”) and public (Phallusies). The discursive content of his performances, recited from memory, varies from iteration to iteration and is accompanied by flimsy props, underscoring the questionable nature of the narrative and of the lecture format itself. In so constructing these works, Fujiwara favors a contemporary and essentially political discussion about the various ways in which performance engages with viewers, whether “emancipating” them from prevailing social controls, as Jacques Rancière has discussed,1or directly implicating them, as Marina Abramovi´c does in The Artist Is Present (2010), an endurance test—conceived for her recent retrospective at the Museum of Modern Art—in which people were invited to sit in a chair facing her for as long as they liked, or could stand it.

Fujiwara puts viewers in the position of being neither entirely free, nor entirely restricted. Frozen featured an environment that was equal parts authoritarian (the tour guide being responsible for what the visitors learned and did not learn) and choose-your-own-adventure (the visitors being allowed, of course, to stray from the guide, to look at the sites on their own and ultimately form their own conclusions). This complicated situating of viewership was established at the outset, with an introductory wall text apologizing for the temporary inconvenience of the fair to those wishing to examine the excavation sites—a setup that confused the relationships of the work to its surroundings and of the viewer to both.

Fujiwara’s installations and performances have thus far benefited from the international exposure of art fairs (prior to the installations at Frieze and Art Basel, his work was relatively unknown)—the network of convention-center stopovers which enables art professionals and collectors to travel around the world, thriving on the easy exchange of objects. Fujiwara plays with the impermanence and materialism of the very art fairs at which he presents his work. His quiet, long-form mode of storytelling and the positive reception it has received refute the logic that art fairs reflect our cultural attention deficit, and are simply sites for pretentious and expensive shopping sprees. His Frozen City at Frieze served as a reminder that the art-fair network will eventually be lost to history, and as a morality tale about the ultimate futility of acquiring artworks. While Fujiwara’s works critique their consumerist context, they do so without being didactic, recalling Jack Bankowsky’s identification of “Art Fair Art . . . predicated on the realization that art, particularly art that presumes to stand in some critical—or better, simply revealing—relationship to the institutions to which it is bound, cannot exist at a supposedly purifying distance from the point-of-purchase universe.”2

IF HUMANS EXCAVATE the general area of the Frieze fair 2,000 years from now, they will likely find remnants of Regent’s Park. They probably won’t unearth evidence of the fair; they certainly won’t find Fujiwara’s project. So how to reconcile Fujiwara’s strategies of the accumulation and recontextualization of information with his awareness of the impermanence of such information? And what, moreover, to make of his romance with antiquated materials: period details and artifacts, including those of relatively recent origin, like PowerPoint and the typewriter?

In Desk Job, presented at the 2009 Venice Biennale, Fujiwara installed the implements for a novelist writing his life as erotic adventure (suggesting a role similar to the one the artist would later play in the Welcome to the Hotel Munber performance). He equipped a desk with a typewriter, a typed synopsis of the story, a collection of notes, and an elegant assortment of architectural photographs. The synopsis describes the author’s failed attempts to write the novel, and his eventually going mad. Housed within Elmgreen and Dragset’s installation in Sverre Fehn’s Nordic pavilion, the desk is a delicate, scaled-down replica of the building’s modern, glass-and-concrete form—a highly stylized fetish. Here the monument becomes a foundation—literally the surface—on which another creative person can construct a story. This is what Fujiwara’s practice focuses on: the fluidity of meaning and the fact that even the most prized monuments of any era are objects for subsequent reinterpretation, repurposing and embellishment. That is, if they are remembered at all.

Meet the Stylists Who Dress Music’s Biggest Stars, From Jay-Z to Justin Bieber