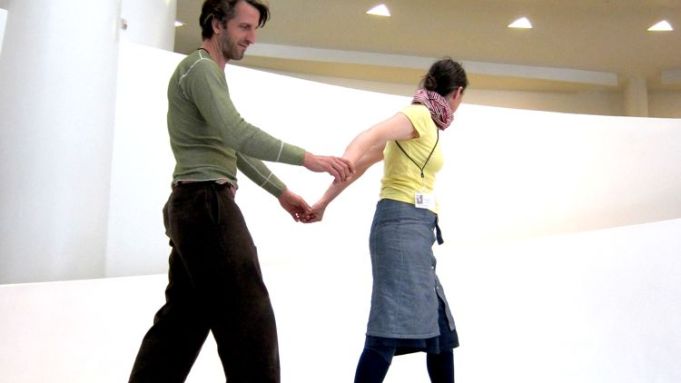 An engineer, a ceramist and a mechanic walk into a bar . . . More likely the inception of a Futurefarmers project than the set-up to a bad joke. The San Francisco-based collective—a melting pot of multidisciplinary activities and participants, from scientists to gardeners to bus drivers—began in 1995 when a museum offered Amy Franceschini, then a freelance web designer, a design job. She wanted to do an art project instead, and Futurefarmers was born.

Initially, Franceschini treated Futurefarmers as “a hiding place to get away” from her day job, but the collective soon became all-consuming. In addition to San Francisco, current members are based in Germany, Denmark, Sydney and Baltimore. For Michael Swaine, resident carpenter and long-time Farmer, “collaborating with an engineer and a ceramist and a car mechanic to help us realize our dreams is the most exciting part.”

Over the past 15 years, Franceschini has taken Futurefarmers all over the world, organizing participatory events in cities from Karlsruhe to Montreal to Boulder. One of their most popular ongoing projects is an online database listing unused plots of arable land in San Francisco. “The Reverse Ark: In the Wake,” a 2009 exhibition at the Contemporary Museum in Baltimore, featured a giant ship made out of recycled local lumber, a “free school” with workshops and readings, and Futurefarmers’ first “pedestrian press,” their take on a low-tech, human-powered printing press.

Franceschini and Swaine were in New York in mid-March to prepare for their latest project, a 10-day exhibition loosely inspired by Simon the Shoemaker. Simon was, as the story goes, a 5th-century B.C. cobbler who, along with other uneducated youths, participated in discussions with Socrates on the occasions the philosopher ventured outside the Agora.

Hosted by the Guggenheim as part of their “Intervals” series, the show opens today and is on view through May 14. “Intervals: Futurefarmers” includes a revamped pedestrian press, plus a series of readings (aka “Sole/Soul Sermons,” at the Guggenheim), non-traditional lectures at locations throughout the city (one involves a field trip to the Gowanus Canal), and other participatory events, like gathering soot with Swaine that will be turned into ink for the press.

Towards the end of the pair’s two-week stay, I stopped by the Guggenhiem to see them in action. Franceschini and Swaine had set up an efficient-looking workshop in the corner of the rotunda, where they and a few other Farmers were constructing curved wooden benches and carving letters into the bottoms of brick-size blocks of wood. These lettered blocks would eventually become clunky, strap-on shoes, used to print a text—step by step and letter by letter—onto a long narrow scroll of paper unfurled along the Bowery, in front of the New Museum.

Before they headed back to San Francisco, we met up at the Guggenheim’s downtown offices. I wanted to know how they got from “Hey, have you read this cool story about Socrates and Simon?” to “Let’s do a project at the Guggenheim all about it!” Franceschini and Swaine looked a little bewildered. Swaine explained why it’s so hard to assign credit. “Amy and I have been working together for so long that we forget where the ideas start. This is an example where we’ve really forgotten the beginning. I remember different parts, but not when it coalesced.”

Why Socrates and Simon? Franceschini filled in some of the blanks. “We both happened to read this story about Socrates being disenchanted with life inside the Agora. Something was empty, and he found what he was looking for in a craftsperson. The more and more we meet scientists, it’s like we’re doing the same thing, trying to figure it out, asking ‘what does it mean?’ It’s really refreshing to work with scientists and hear them say, ‘the more I know the less I know.’ That’s the space that’s interesting to me.”