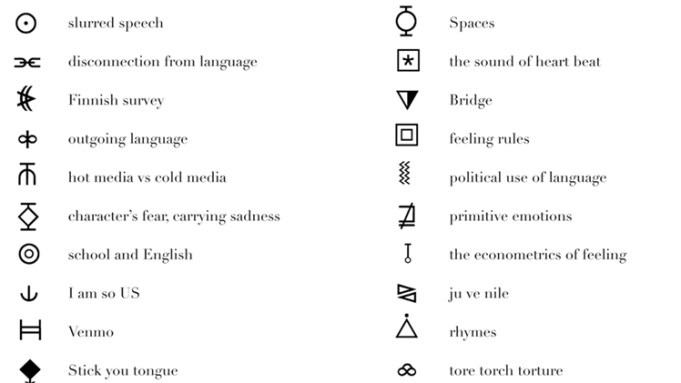 The iconoclastic practice of artist and educator Fia Backström encompasses numerous vocations and working methods. Over the last decade, she has taught at Columbia University, Bard College, and Princeton University, and the study of language, pedagogy, and the institutions that foster knowledge are important to her work. Intensely collaborative, Backström’s writings, installations, and performances originate from her social context (for example, she has used emails with artist peers and museum staff as textual materials), and by adopting personas from an amateur to a bureaucrat, she fluidly challenges prevailing institutional power dynamics within communities of artists and intellectuals. Her new book COOP A-Script, which experiments with poetic language and its visual and physical manifestations, reminds us that reading is an irresolvable negotiation with the present.

For COOP A-Script, which was released by publisher Primary Information in September, Backström adapted two performances from 2014-Aphasia as a way of speaking, on A-production and other language syndromes and the shorter ME must be turned upside down to become WE-for the printed page. The book’s brief introduction reads like a how-to entry in a textbook or syllabus: rather than describing either work, it lays out Backström’s instructions for the performers. Aphasia, which takes up the bulk of COOP A-Script, is a complicated composition. The live version requires a single performer to read two sets of texts printed on loose sheets of paper and arranged in a grid. The process is guided by the intricate typography, though the performer can occasionally improvise interactions with certain texts. ME . . . WE, written for four performers, is simpler: anyone can read, either individually or at the same time, so long as it follows the text. By providing procedural instructions, especially for Aphasia, Backström emphasizes the rules, and though it is not clear whether the publication of COOP A-Script should be taken as an invitation to re-perform the works, the book’s elaborate design-which includes fifty-four typefaces, vellum pages, foldouts, and other mutations of the text-makes the act of reading feel almost like a performance.

Each of Aphasia‘s four chapters proposes a curriculum for the study of language, with distinct disciplinary approaches. The first, “emotions, naming, gradients,” draws from psychology and philosophy; “our lives in numbers” employs the vocabulary of economics and statistics; “globish” remarks on globalism, nationalism, and collective identities; and finally, “communication disorders” delves into neuroscience and biology. The text intersperses cited and uncited quotations with Backström’s poetic writing, like a binder of wide-ranging notes with interpretive associations scattered throughout. In a passage on computer intelligence, Backström beseechingly asks, “Is there a space for intuitive truthiness instead of a rational examination of facts?” The rhetorical question reveals a researcher grappling with her own systems of understanding. Here, as in much of Aphasia, a circular discourse brings out the exciting emotional verve of a new idea on the verge of realization, though a full reckoning always seems purposefully just out of reach.

Backström’s evocation of aphasia-the loss of the ability to read, write, and speak following a stroke-can be discomfiting. One passage that quotes a YouTube interview with a teenage stroke victim is horrifyingly disconnected. In Aphasia overall, the use of statistics, technical protocol, economic theory, and logic-not to mention the esoteric internal referencing system that uses obscure mathematical symbols to designate various parts of the text-suggests other chronic disorders such as autism and OCD, revealing an uncanny and uncomfortable similarity between disability and deconstruction. Backström handles challenging material with subtlety and nuance, employing the devil’s advocate contrarianism of a good teacher to invert expectations. She applies statistical probability to an individual’s emotional reactions, for example, and discusses the ethical dilemmas of artificial intelligence. She adopts some of the emotional distance of hardline scientific method, but she’s able to diagnose the disquieting gulf between the individual and the various overlapping systems that implicate her in large-scale communities, or reduce her to the minutiae of the self.

Backström’s manipulations of the text’s layout inflect it with the character of spoken language. Tone, proximity, volume, and pace have an intangible influence over meaning, and Backström’s emphasis on typeface, justification, and other elements of design create a visual style that mimics the qualities of oral expression, by turns chaotic, inchoate, or melodic. In many cases, it results in nonsense, as with a passage that breaks the words “struggle” and “radical” into “Straw Gel” and “Red iCal”: when read aloud, the meaning is clear, but visually, the clunky puns briefly dissociate grammar rules from habit. It mimics the hilarious misapprehension of a speaker’s second language, and language’s tenuous and geographically relative relationship with meaning. Backström’s maneuvers recall earlier projects like lesser new york (2005/15), for which she collected her peer’s press releases, records, posters, CD-Rs, and other assorted marginalia and displayed them in the dry, archival manner of a history museum in her Brooklyn apartment. In 2005, artists were redefining these materials as viable contexts for work. By 2015, when Backström revisited the project, publishing documentation of it as part of a pamphlet series produced by PS1 for Greater New York, digital communication had intensified, and these analogue materials and printed hard-copies offered insight into the role of documentation and language on art. Similar to COOP A-Script‘s rebus-like approach, lesser new york‘s self-reflexive focus on Backström’s social circle may come off as cliquish or insular. But emphasizing the messy, humble, and fragmentary modes of production, she demonstrates how a community can’t be accounted for by a monolithic, institutional history. Steeped in hand-to-hand and word-of-mouth exchanges, lesser new york veers between nerdy bookishness and gossip. COOP A-Script develops a writing style that is equally academic and ineffable.

Backström creates a tactile form of reading, in which visual cues condition our physical relationship to the book. Shifting the scale from meaning to material and back, Backström merges performance and reading, re-introducing the body to the text. In ME . . . WE, she types “OOOOOOOOOOOOOO / OOOOOOOOOO / OOOO.” When a mouth pronounces the sound, it both expresses and speaks surprise. During the piece’s performance at the Segue Reading Series in New York in November 2014, Backström’s collaborators (A.K. Burns, Katie Hubbard, and Matt Keegan) read the lines simultaneously, though each a different way. One broke them into individual syllables, another combined them into a long drone, and a third interpreted them with a fragmentary and irregular intonation. They sang with the same orifice, the same sounds, the same letters. Yet, combined into an arcane and incantatory chorus, the verbal gobbledygook was contiguous and amorphous. COOP A-Script filters a multitude of voices. Like the performance, the book cannot be assimilated to either the individual or the group.

The 29 Best Bralettes for Every Bust Size

From Water Filters to Fire Starters, These Are the Best Emergency Supplies to Have at the Ready