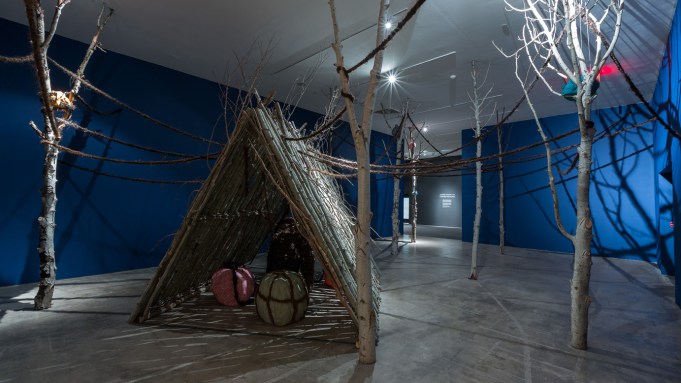 As a nonprofit that emerged out of and in tandem with a biennial, SITE Santa Fe has a unique profile. The institution was founded in 1995 to present the first international art biennial in the United States, and soon after, developed a year-round schedule of programming. In the last two decades, SITE has presented eight biennials and many more solo and thematic exhibitions. “SITElines,” a cycle of biennials launched in 2014, moves SITE’s recurring exhibition in a new direction, with a focus exclusively on art from the Americas.

The art space’s 20th anniversary program, “SITE: 20 Years/20 Shows,” reflects its history as a production-oriented institution. Launched in March, this series of four exhibitions invites selected artists to return to SITE to create new work. The second rotation of the show (through Oct. 4) brings together projects by five artists. Janine Antoni and choreographer Stephen Petronio present a hypnotic video installation of a dancer based on movements of a fetus in utero. Amy Cutler, in collaboration with a musician and hairdresser, expands her painting practice into an installation about “unburdening.” Harmony Hammond and Francis Cape have created Angle of Repose, an installation of a flesh-toned painting by Hammond and Cape’s furniture. Dario Robleto teams up with the record label Dust-to-Digital on an installation about the human heartbeat as sound. And Ann Hamilton has reconceived the common SENSE · the animals (2014-15), a monumental installation of scans of animal specimens, with a musical element.

Complementing the “20/20” program at SITE this summer is “Unsuspected Possibilities: Leonardo Drew, Sarah Oppenheimer, and Marie Watt,” a three-way collaboration between the artists. Conceived as a “phenomenological unit,” the works spring from the artist’s use of reclaimed materials. Watt’s installation of used textiles and Drew’s sculptures of evocative objects like burnt wood are joined by Oppenheimer’s architectural interventions.

Irene Hofmann, director and chief curator of SITE Santa Fe, spoke to A.i.A. by phone about the space’s current exhibitions, the heyday of biennials, and why regionalism may be making a comeback.

WENDY VOGEL  What was the process of putting together “SITE: 20 Years/20 Shows,” your yearlong anniversary program?

IRENE HOFMANN  There are many ways that museums can honor an anniversary like this. We looked at different approaches, including retrospectives of past shows, publications and the like. It quickly became clear that what we really wanted to do was invite some of the artists who had the greatest impact on our audience, and for whom showing at SITE was important in their own careers. Seven hundred artists have shown here, and so it was a big task to pick 20, but really we’re looking at those artists who have spent a considerable amount of time with us—we got to know them and they really put a lot into the project they had here—and that narrowed down the list. Within the 20, we have two generations represented, and a wide range of the kind of artists and work that we’ve shown over the years.

VOGEL Collaboration is one thread that has run through this particular series of shows. Can you talk about some of the collaborative projects that are on view now?

HOFMANN Our invitation to several artists included the proposal that they might think about this opportunity as a chance to collaborate with someone else—either another artist or someone from another discipline. The summer segment of “20 Years/20 Shows” focuses on these collaborative projects. We ended up with projects like Janine Antoni and Stephen Petronio’s. Janine and Stephen, an artist and choreographer, had already been working together before our invitation. With the case of Harmony Hammond, the invitation was a chance not to make a work together, but to show alongside and in dialogue with Francis Cape, an artist she had long admired, whom she had never worked with. Another extreme is Amy Cutler, who took this opportunity to translate her delicate works on paper depicting fantastical worlds, often with women in forests engaging in various kinds of labor, using materials like textiles and hair. She collaborated with a sound artist and a hairdresser to bring one of her works into three dimensions, into a large-scale installation.

Ann Hamilton has made many works with attendants—either the audience engaging in some kind of activity within the installation or particular attendants who carry out a task. Our invitation presented an opportunity to take a piece she had already created at the Henry [Art Gallery at the University of Washington] to a new level and reinstall it with some new ideas brought forward, in particular a collaboration with a group of singers. In Santa Fe that opened up the possibility of working with the Santa Fe Opera apprentice program that is in full swing during July and August. Every Friday [through Aug. 28], a performance takes place within her installation. It’s not chairs in a row with the audience seated and listening. It’s a singer in the space singing to the work, which is thousands of images of animal specimens. The audience looks at the work and the singer walks in and among the people, and it’s an experience that our audience has just absolutely loved. There are about a hundred people every Friday jammed into this piece!

VOGEL  SITE Santa Fe is a nonprofit that emerged from a biennial framework. Were there plans to revisit the history of biennial-making over the last 20 years during this anniversary program?

HOFMANN  Targeting the biennial structure, not just here but everywhere, is a big part of what we’ve done in the last four years. I acknowledge that making biennials the same way that they were 20 years ago is not only no longer interesting for an institution like SITE, it’s perhaps no longer the most relevant way.

The model of the biennial, when SITE was only one of a handful in the world, was a major curatorial figure coming to a place and creating a biennial in that place. For SITE, as well as many other early biennials, that strategy worked well. After 15 years, there were hundreds of exhibitions with very similar models, but it was often the same curators, and in many cases, a lot of the same artists. It was becoming a circuit. Not only was SITE one of hundreds of biennials in the world, our exhibitions did not have a distinctive quality or point of view beyond the fact that it was in Santa Fe.

In response I gathered many curators from different generations and different cultural perspectives. We had an intense private roundtable where we were trying to find out what everyone else was feeling. We were talking to the very curators who were organizing shows in those early days. They, too, were finding the structure of biennials not only hard on curators but hard on artists—the two-year cycle, the pressure to produce quickly, the pressure to relate to a place with hardly any time or money. For that reason, in the catalogue of our first “SITElines” exhibition last year, we wrote an essay called “The Unsettled Biennial Landscape,” because we wanted to share some of what came out of that roundtable. It was an opportunity to memorialize a truly fascinating conversation from the field.

VOGEL  Your current cycle of biennials, “SITElines,” is comprised of art of the Americas. How did you come to that decision?

HOFMANN  We knew that SITE’s exhibition needed greater focus, one that made sense in the history of the institution, and that we needed to alter the very infrastructure and approach to making biennials so that we could deal with some of the challenges that biennials were facing. That meant focusing our biennial, beginning in 2014 and moving forward, on contemporary art from the Americas. It’s still half the world, and yet it centers us in a way that is true to where we are. Santa Fe sits quite literally on the Pan-American Highway, a road that connects us from Alaska to Argentina. And Santa Fe is a microcosm of the Americas, because the population of every layer of history is still reflected in the people that are living here today. The Native American population, of course, was here first, followed by the Spanish and Mexican population. People still trace their history back to those migrations. That’s a powerful part of the experience of living, working and coming to visit here.

VOGEL  Do you think biennials around the world are becoming more regional in their focus?

HOFMANN  I think even those shows that claimed to be global were often representing the same few artists from places at the periphery. SITE was claiming to be international, but were we really doing the same kind of research all over the world? No, we were not. A general consensus among all the curators was that this claim of global research is incredibly challenging, especially on a two-year cycle.

One of the reasons why we are able to have greater time for all of our exhibitions is that there’s continuity in the staff at SITE. So much travel that my staff is doing throughout the Americas is not just about research for the next biennial. It’s about making connections to smaller places so that we not only have a network, but we’re able facilitate research by future artists and future curators. Are we going to say our show is regional? Yes, it’s the entire Western hemisphere. It is obviously a vast territory, but we are in a great position to really delve deep into it.