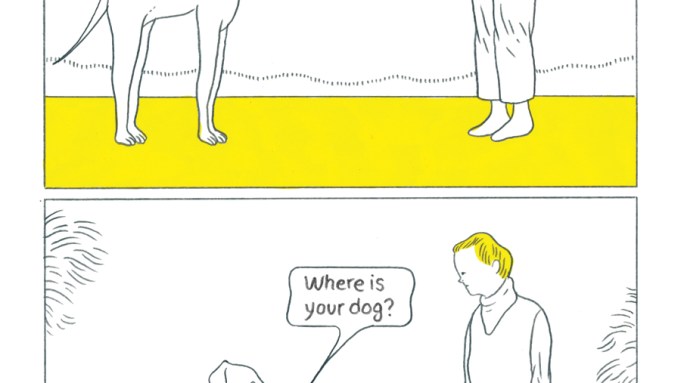 A variety of graphic work was published this year: narratives both long and short, imaginative fiction and political reportage, books with enough text to be considered long essays and others that were entirely visual. This list that follows attempts to convey that formal diversity. Several books here are records of loss: of a friend, an uncle, a city, a homeland.

You & a Bike & a Road by Eleanor Davis (Koyama Press)

There are two reasons Eleanor Davis decided to bike the one thousand eight hundred miles from her parents’ home in Tucson, Arizona, to her own in Athens, Georgia, in 2016. The first, which she shared with anyone who asked, was that she wanted to ride home on a new bike her dad had built for her. The second she didn’t say out loud: “I was having trouble with wanting to not be alive. But I feel good when I’m bicycling.” You & a Bike & a Road is a visual diary of Davis’s fifty-eight-day bike trip. Featuring a variety of sights and places, from a border patrol blimp in Texas to a recreation of an Afghan town in Fort Polk, Louisiana, the account is at once political and meditative, loving and intimate. Rendered in exuberant pencil and pen drawings that feel like motion itself, Davis’s book reverberates with a real sense of wonder that builds as she gets closer to home.

Julia Wertz lived in Greenpoint, Brooklyn, for nine years before her landlord evicted her in 2016. The New York that she got to know is intimately mapped out in this illustrated history of the city. Wertz compiles a wide range of discrete narratives—an account of the thirty-year pinball prohibition, a study of changing store fronts, a history of Mr. Potato Head—that add up to a personal topography. Her charming drawings scan something like a monochrome mix of Tin Tin and Bob’s Burgers: a crosshatched prewar Gothic Victorian co-op appears just pages from a lobster expressing its revulsion at copepods, the microscopic crustaceans that live in the city’s water supply.

Christophe Chabouté’s Park Bench, narrated entirely visually, is about a bench in an unnamed city and the people drawn to it. In a series of unconnected vignettes, Chabouté depicts a microcosm of varying human connection: friends who sit and talk, a cop ticketing a homeless man for loitering, two people having separate arguments on their phones. These brief incidents accumulate into a larger portrait of society that reveals both kind and cruel ways that people treat each other.

Threads: From the Refugee Crisis by Kate Evans (Verso Books)

Threads, drawn in full color, is a work of illustrated reportage about “The Jungle,” a refugee shantytown located near the French port town of Calais, which housed mostly Middle Eastern and Africa refugees between January 2015 and October 2016, before French authorities forced them out. Cartoonist and activist Kate Evans, who regularly visited the area, contrasts the camp’s inhumane conditions, engineered by authorities who didn’t allow for adequate sanitation or permit visitors to bring in supplies, with the personal stories of stateless people retaining their humanity through love and friendship. An empathetic book on a complicated issue, Threads is at once infuriating, heartbreaking, and tender.

At the start of I’m Not Here, the protagonist lies in bed reading Fernando Pessoa’s The Book of Disquiet. She quotes from the book: “To feel today the same thing we felt yesterday is not to feel at all—it’s merely to remember today what we felt yesterday, since today we are the living cadaver of yesterday’s lost life.” This estrangement from the self, a sense of life slipping away daily, takes on a literal meaning as she roams around an unnamed city, reflecting on familial responsibility. When her mother’s arm falls off, for example, she helps her tape it back on. Later, she runs into her father, who seems lost but won’t accept help with directions home. Eventually she spots a doppelganger of herself. I’m Not Here, rendered in an opaque visual style that looks almost rotoscoped, is an attempt to grasp the world before it fades.

Imagine Wanting Only This by Kristen Radtke (Pantheon)

Kristen Radtke’s book, which responds to the death of a beloved uncle, doesn’t follow the traditional narrative arc of a memoir: there is no triumph, and loss leads only to exploration, both literal and metaphorical, of ruin and decay. In an associative style reminiscent of the best creative nonfiction, she weaves together personal memories—of a childhood in Wisconsin, her experience at art school, and an MFA program in writing at the University of Iowa—with research on World War II–era government simulations of firestorms, a ruined mining town in Colorado, and Chris Marker’s Sans Soleil. Radtke pushes the textual boundaries of the genre with artful, informative essays, and there’s a feverish rush to fill a space left by loss. Her pliable drawings, suited to rendering uncanny interior states, are mixed with historical photographs, letterheads, and computer screenshots. The result is haunting.

A Friend by Andrés Magán (kuś!)

The story Andrés Magán tells in A Friend is simple: a man loses his dog and looks for him. But the quest soon turns strange. A brick is thrown through his window. The attached note reads, “Where is your dog?” The dog returns and asks the same question. The border between reality and the protagonist’s delusion blurs as Magán’s elliptical structure repeats the same few events. He draws with sharp, thin lines, and his panels are occasionally filled with a yellow tone that fulfills Wassily Kandinsky’s theory that the color is well-suited to “representing madness.” Stapled together and approximately the size of an iPhone, A Friend is the perfect pocket companion for an unfriendly world.

Beyoncé’s Grammy Looks Through the Years