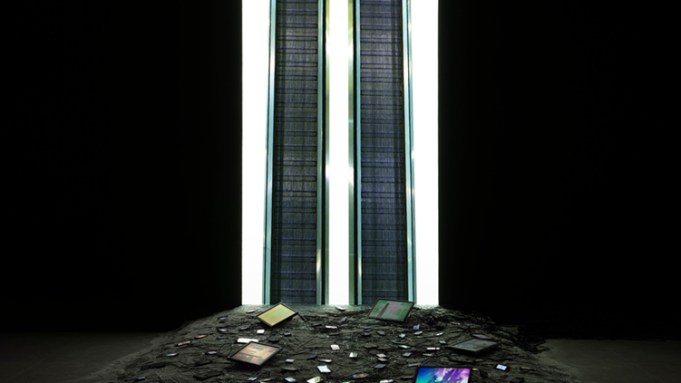 September 8, 1978, was a day that shaped the Persian Gulf as we know it. A crescendo of religious demonstrations culminated in a massacre that has come to be known as Iran’s Black Friday. Guards opened fire, killing an estimated eighty-eight protestors and decimating the Shah’s tenuous hold on the country; he fled soon after. The instability and religious extremism caused by the Islamic Revolution led to the brutal Iraq-Iran War, which was followed in turn by the economically devastated Iraq’s 1990 invasion of Kuwait that ended with Saddam Hussein’s retreating armies setting oil fields ablaze. The fires were doused by 1992, but the memory of those acrid black plumes would suffocate the Gulf for years to come.

This was the world of artist and writer Sophia Al-Maria’s childhood. She spent it ricocheting between Qatar and the United States, a country with its own Black Friday— the frenzied post-Thanksgiving excess that comes once a year. In Doha, her life took on a timbre particular to the Gulf in the ’90s. The oppressive heat, coupled with gender segregation, meant that life was largely lived in air-conditioned spaces and mediated by an increasingly smaller series of screens: TVs showing satellite programs late at night, video-game consoles where the simulations of Desert Strike indefinitely extended the Gulf War, veils, and cellphones. These threads of rampant consumerism, religion, and violence coalesce in the immersive video installation of Al-Maria’s first US solo exhibition, “Black Friday,” on view at New York’s Whitney Museum of American Art through October 31.

Screened in a darkened gallery on the ground floor of the Whitney, the video Black Friday (2016) features looped footage shot in Qatari malls with handheld and drone cameras. Images appear in a distorted vertical projection, the shape of an altarpiece or a cellphone video. In the opening shots, for example, an ordinary pair of escalators are skewed to such an extreme degree that they inescapably evoke the twin towers of the World Trade Center. The drone camera’s gaze is often loving, swooping around the neo-Italianate yet unmistakably Gulf interiors—luxe floors, ornately tiled walls, ceilings painted with puffy clouds—with a tenderness that seems like a caress. The video’s booming soundtrack, with a plummy voiceover by actor Sam Neill, is like a hallucinogenic Friday sermon, except that here the mall has superseded the mosque. Like Al-Maria’s pulpy “Gaze of Sci-Fi Wahhabi” (2007–08), a series of granular videos that splice shots of her face with found YouTube footage from the Gulf, Black Friday is a techno-pessimistic communion between sonic cues (anxious synths, baleful drones, the static of deep space) and visual traces of Qatar’s particularly austere strain of Islam. Yet in Black Friday the artist is never seen, only briefly heard recounting, in the hazy cadences of a half-remembered dream, how she ran into a Seattle classmate who joined the military in a Doha mall. Her abaya grants her a welcome anonymity; his buzz cut gives him away.

At its core, Black Friday is a paean to the mall as secular site of worship as well as what the artist describes in a statement as a “weirdly neutral shared zone between cultures that are otherwise engaged in a sort of war of information and image.” At times, the video functions as an overly literal embodiment of the Gruen transfer, a retail psychology theory that advocates sensory bombardment in the hope that the overstimulation will result in impulse buys. Al-Maria disorients the viewer with a more-is-more arsenal of special effects and sudden, lurid bleeds of coral and fuchsia into an otherwise cold palette. Mannequins woozily ripple into the marble of the mall floors, for example, while a man and boy clad in loose white robes get fractured into a kaleidoscopic mosaic. The overall effect suggests a first-person shooter game run through Google’s Deep Dream filter. When faces appear, they are heavily blurred, as bystanders are in the images of Google Street View. Perhaps Al-Maria is emphasizing technology’s effects on the body, or reminding us that filming people (especially women in abayas) in these spaces is verboten.

At the foot of the video projection is the floor installation Litany (2016), a flickering graveyard of screens on sand that glitters with glass shrapnel and teems with power cords. It suggests an apocalyptic scenario where only the electronics—the cockroaches of this particular dystopia—remain. The room is large and empty, save for a viewing bench along the back wall, but the work beckons you to sit at the sand’s edge, steel your eardrums, and view it up close. The pile of wires summons the gaming rigs of a Gulf living room and a sense of playing Nintendo as bombs fall, but Litany’s snake nest ends not in controllers but a mass of cellphones, tablets and monitors. Short clips flicker on each screen. The conflict among the sights and sounds is not quite war, but a cranky squabbling nonetheless. The selection is reminiscent of the weird, junky, and often illicit videos that circulate over cellphone networks, a colony of what Hito Steyerl has dubbed “poor images”: ads for skin lightening, newsreels of soldiers marching, animals doing things, and glitchy commercial fragments bedazzled with high-end brand logos. In quiet moments (the soundtrack is loud enough to make your bones shudder), the screens collectively chirp and chatter like a bundle of dyed chicks.

Al-Maria is best known for coining the term “Gulf futurism” in 2007 to describe the accelerated, petrodollar-fueled rate of urban development, digital enmeshment, and hypercapitalist ostentation of the Gulf. It’s a futurism that reads as more Marinetti than Mark Dery, an uncompromisingly violent embrace of speed and progress that resonates in the throbbing malevolence of Black Friday’s soundtrack. In the past decade, Gulf futurism has come to connote a highly aestheticized genre of imagery: otherworldly deserts, gleaming towers, drag racing in turbocharged vehicles with underbody neon lights that cast an unearthly glow, Arab women in nacreous hijabs and, especially, the shopping centers that proliferate around the Gulf even as their suburban American counterparts fade into obsolescence.

Al-Maria’s ideas about gulf futurism seem to distill J.G. Ballard’s remarks in his 1970 novel The Atrocity Exhibition that

Deserts possess a particular magic, since they have exhausted their own futures, and are thus free of time. Anything erected there, a city, a pyramid, a motel, stands outside time. It’s no coincidence that religious leaders emerge from the desert. Modern shopping malls have much the same function.

Yet Al-Maria’s malls neither exist out of time nor are they hurtling toward the future. Rather, they seem to be stuck in a time warp. Their shoppers are condemned to forever ride escalators in reverse, or circle lobbies without respite, as with the stilettoed, veiled woman who is left turning and turning, even as the walls and the nauseatingly spinning ceiling get greenscreened out for blue skies like an Apple Photo Booth backdrop. After the painted clouds of earlier shots, there is a faint terror in seeing the real thing. The imagery takes on a sharply eschatological tenor that reveals the mall as analogous to Barzakh, the Islamic purgatory. Yet the Gruen transfer appears to have failed. Perhaps the closing shots depict fallen women who have shopped till they dropped, but the absence of bags and their awkward facedown splaying instead suggests a more sinister collapse—and it is here that Black Friday is the most successful. In keeping viewers at a cool distance and aggressively denying them the possibility of consuming the Gulf as something unfamiliar, Al-Maria wisely avoids the self-Orientalizing, kitschifying impulse common to much work from the region. “Here,” Neill’s voiceover forebodingly intones, “there is nothing to ingest, but to be ingested by.” The mall’s open maw holds the dream of the Gulf that’s always already foreclosed. It should feel dystopian and maybe even a little horrifying. But it feels like home.