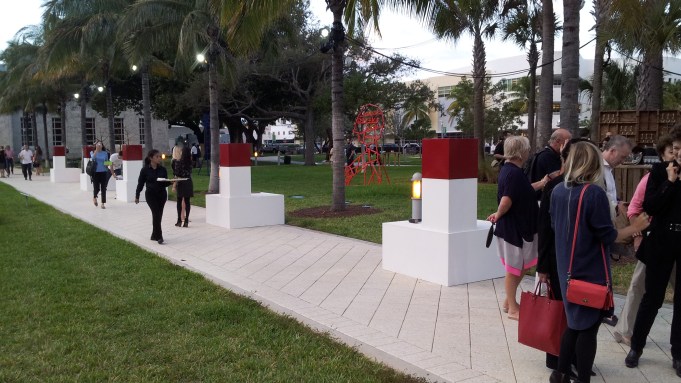 On the evening prior to the opening of this year’s Art Basel Miami Beach fair, New York’s Public Art Fund premiered four commissioned works in Collins Park, located in front of the Bass Museum of Art.  Performances by David Colman, Mungo Thomson and Kate Gilmore occurred simultaneously, while Olaf Breuning’s piece kicked off at the end of the night. Despite its sponsorship, the first presentation was a private reception, by invitation only. The public was permitted to attend the second and final evening of the performances.

In addition to the program of live work, PAF curator Nicholas Baume had also arrayed throughout the park sculptural works by 29 artists. The sculptures and performances were intended to address the public directly, away from the art marketplace set up in the Convention Center and throughout the city during ABMB.

As if anticipating the guilt that might descend upon the throngs of wealthy art patrons and women in shoes whose cost would seem to surpass the GDP of many developing countries, Colman, based in New York, set up his Santa Confessional in the Rotunda, a circular structure surrounded by a moat at the northeast corner of the park. His helpful elves handed out “indulgences” to the partygoers, inviting them to unburden themselves to Colman, a.k.a. “Santa Sacramentum.” These were a mockup of the U.S. dollar, with the inscription, “This note is holy tender. Good for one escape.”

Entering the Rotunda, guests were instructed to wait in line for Santa, who occupied a confessional that was only partially enclosed. Each person who entered the confessional was asked the standard Santa question (“What do you want?”) and the standard Catholic question (“What do you feel guilty about?”). Carrying the ritual through, Colman absolved the supplicants, adorning them with a brass pin and feeding them a breath mint instead of a communion wafer.

Outside, in the gloaming, the sound of crickets could be heard, or so it seemed. In fact, the chirping was produced by a quartet of musicians, lurking in the shadows of the park, playing L.A.-based Thomson’s naturally minimalist insect noise composition, Crickets Solo for Clarinet; Violin; Flute; Percussion. The effect was so subtle that many of the guests may have remained unaware of the human source of this night music, unless they happened to stumble upon one of the musicians. For example, a somewhat pained violinist struggled to ignore the curious photographers that occasionally gathered around him, like moths to a flame.

Impossible to ignore, however, was New York-based Gilmore’s Only One Like You. Gilmore, known for grueling and often destructive performances, had placed a series of white platforms topped with a square white pedestal to which she had attached a red cube along the two paths that ran the length of the park. Ten androgynous male and female performers, naked from the waist up and wearing loose-fitting Levi’s, brown work boots and red bandanas (a costume apparently inspired by the album cover for Bruce Springsteen’s Born in the U.S.A.) wielded sledgehammers, pounding away at the red sheet-metal cubes for 90 minutes. The force of their blows caused the platforms to skew into the paths and, in the cases of the more aggressive hammerers, destroyed the cube. The less brawny performers were sometimes outmatched by the weight of the sledgehammer itself: one wispy youth was scarcely able to lift it. As night descended and spotlights beamed down on the platforms, the performers wearied, pausing now and then to chat with some of the patrons, and in the end posing with the sledgehammers, the sweat from their labor glistening in the artificial light.

While Gilmore’s hired laborers caught their breath, technicians fiddled with Zurich- and New York-based Breuning’s Smoke Grid, allowing the crowd to assemble at the eastern edge of the park. The metal grid, resting on top of a low platform, was made of two upright poles supporting three unevenly suspended bars, each with a number of smoke bombs attached to it. As the finale for the evening, the smoke bombs were all ignited at once and, in a single burst, released different colored puffs of smoke into the night. The colors quickly fused into a light beige cloud that scattered the crowd.

This $5.3 Million English Country Estate Comes With a 13th-Century Castle

Workout Shorts Have Never Been Better: Here Are 12 Pairs to Pick Up Online