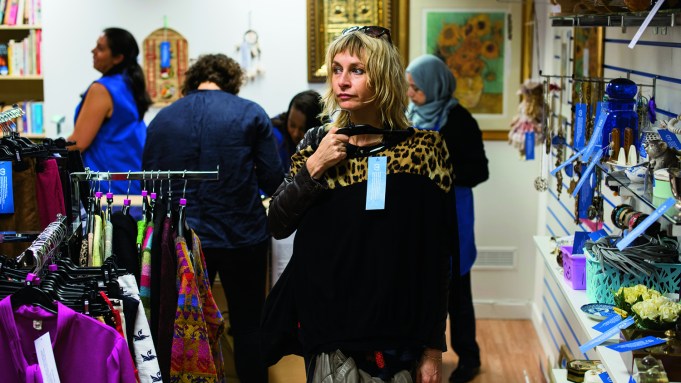 ONE OF THE THINGS that Miranda July found most striking about London, she said during a Q&A last October that marked the end of her two-month public art project in the city, was the variety of what in the UK are known as charity shops, retail outlets that are roughly equivalent to thrift stores in the United States. The American term, though, doesn’t convey the sense of genteel, small-scale pokiness or the high-street ubiquity of our British versions. The range of different types here is extremely broad: we have chains of shops founded by religious groups as well as by organizations dedicated to specific social or humanitarian causes, including the treatment of virtually any major disease you care to name, not to mention a whole raft of individual stores run by hospices. “It seems so British to me,” said July, “that there should be every faith, every malady, every suffering, in the form of a charity shop.” Of course, from a British perspective it seems striking that the business of selling donated, secondhand goods to raise money for charitable purposes should be dominated by a small number of mainly Christian organizations, as July implied was the case in the US.

Though July is known primarily as an author and filmmaker, her piece for Artangel, a London-based organization that commissions site-specific works, consisted of bringing together four British charity-shop companies to create one amalgamated pop-up store. The participating groups were all affiliated with different religions (their specific causes ranging from learning disabilities to homelessness and addiction recovery), so the work was meant as a statement of religious communality: it was billed as the UK’s first interfaith charity shop. There was particular emphasis on fellowship with an Islamic charity, as the work’s extravagantly prosaic title made clear: Artangel & Miranda July present Norwood Jewish Charity Shop, London Buddhist Centre Charity Shop & Spitalfields Crypt Charity Shop in solidarity with Islamic Relief Charity Shop at Selfridges (2017). And as for that last bit, yes, you read it right: the shop was installed at Selfridges department store—that gargantuan, sprawling palace of retail, that temple to consumption at its most deliriously conspicuous. Plonked down incongruously within the high-end Designer Studio section on the third floor (showcasing “luxury ready-to-wear collections,” according to Selfridges’s website), the cozy little establishment gave every appearance of being a genuine charity shop, right down to displays of chintzy bric-a-brac, racks of quirkily random clothing, and a faint air of dilapidation. Indeed, it was a genuine charity shop, albeit one fabricated solely for the two-month run of July’s commission.

Visiting the shop offered a sort of anthropological experience, a study in consumer behavior and expectations. Well-heeled Selfridges customers, stepping off the escalator and suddenly discovering the place, seemed rather bemused, particularly as the window mannequins were togged out in an array of traditional garments from Islamic Relief, from headscarves and skullcaps to full-body robes. Other shoppers, lured perhaps by prices a fraction of those anywhere else in Selfridges, ventured in curiously. The shop seemed especially popular with tourists, for whom it was a cheap way to get the iconic little yellow bag that comes with every Selfridges purchase. As for the participating charities themselves, the location was an absolute boon. One sales assistant (staff were drawn from all four discount stores) told me that the takings from a single day often compared to an entire week’s worth from their other branches. Profits were distributed equally among the charities, with 2.5 percent of every share being passed on to a further charity of each organization’s choice, in line with the Islamic principle of zakat.

Very few shoppers, unless they knew about the project in advance, clocked it as “art,” it seemed to me. I overheard another assistant explaining to customers that the whole thing was an art installation. It followed, she further theorized, that every item for sale was a work of art as well. I wasn’t so sure, however. For me, the main point of the piece was less about such Duchampian shifts in status than about the placement of the charity shop within Selfridges. July’s work highlighted the acute tension between competing economic ideologies—extreme self-indulgence versus social enterprise—in stark proximity. Implicitly, the essential question being raised was where art itself might sit on that spectrum—whether art has a duty to look beyond its confines, its self-regarding concerns, and address the structure of the real to effect social change in some way.

July is hardly the first artist to construct a transactional space and present it as art, of course. Projects such as Carsten Höller’s Congolese nightclub-restaurant or Tobias Rehberger’s series of café-bars spring to mind. But it’s interesting that July chose a type of establishment that explicitly speaks to concepts of social consciousness and responsibility. In doing so, she tapped into various concerns that are being debated fervently here in the UK: theories of social funding, notions of community, national values. After all, we’re currently in the process, following the Brexit vote, of negotiating our withdrawal from one community; and the problem is there’s no unified or clear idea as to what sort of community, by ourselves, we’re going to be afterward. The issues are hopelessly fractured along demographic lines. In that sense, July’s interfaith charity shop could be seen as offering a case study in connection and collaboration, a conduit for bringing different groups—different religious groups, potentially even different consumer tribes—together.

AS IT HAPPENED, other artists with major works in London this fall were also thinking in terms of social models. Halfway through the charity shop’s run two more projects opened: the Hyundai commission for Tate Modern’s enormous Turbine Hall, a work titled One, Two, Three, Swing! (2017) by the Danish collective Superflex; and the annual commission for the private Zabludowicz Collection, which went to British artist Haroon Mirza and his studio, hrm199, for the exhibition “For a Partnership Society.” Both shows sought to elevate collective action or collaboration to the status of a grand ideal, a rallying principle. One, Two, Three, Swing!, in particular, seemed intended as a sort of utopian allegory, showing visitors the way to a brighter British future.

The installation’s starting point, occupying the vast, sloping concourse of Tate Modern’s entrance, is a brightly striped carpet—echoing the colors of British banknotes—while hanging from the ceiling above is a huge spherical pendulum that’s meant to oscillate according to the earth’s rotation, though I only saw it static. Anyway, it’s meant to signify the global mechanics of capitalism. Together, these elements comprise the “Apathy” section of the installation. At the Turbine Hall’s far end is the “Production” section, consisting of a little workshop where special seats for swings are ostensibly assembled. Finally, there’s the main section, “Movement,” where thirty-three of these swings are suspended from a continuous tubular structure and everyone is free to play on them like children. However, in theory, the swings work properly only when three people use them, so that individuals or pairs have to forge new connections and team up into trios (like Superflex themselves) in order to enjoy such blissful liberation.

If my tone sounds a little sarcastic, it’s because I found the installation almost unbearably naive. For a start, the cooperative concept simply doesn’t work on a practical level. Blame the famous British reticence for interacting with strangers, but hardly anyone I saw was sharing the swings as threesomes, although pairs of friends, even individuals, were making pretty good goes of it. Plus, if the children jostling for any available swing was any guide, the playground format actively encourages competition and selfishness (my fault for going during the half-term holidays, I guess). More seriously, the entire notion of collective action as a tool to overcome apathy seems misguided. It isn’t apathy that currently characterizes the political situation in Western democracies including Britain, but rather numerous ideologies and mass movements rubbing up against each other. Sure, so the installation isn’t making a real-life intervention in the manner of July’s piece: it exists purely in the realm of metaphor and symbolism. But by failing to properly define what we’re up against—by, in fact, assuming there’s a stable, recognizable “we” or a universally agreed-upon problem that everyone’s opposed to—Superflex’s paean to collective action falls rather flat.

Mirza’s exhibition was similarly unconvincing. The conceit was that partnerships between different disciplines or practitioners—an exchange of expertise—could function as a template for how a mutually beneficial society might work. Unfortunately, none of the projects turned out to be collaborative in any meaningful way. Guests such as cello player Okkyung Lee or dance company Studio Wayne McGregor were invited into the Zabludowicz Collection’s London space, a venue that was formerly a Victorian Methodist church, to respond to Mirza’s trademark installations of pulsing speaker units, LED lights, and glitchy sampled video footage. But a response isn’t the same thing as a partnership. To make it plain: if I respond to the dancers’ performance by describing it—elegant, occasionally captivating, didn’t gain much from being in the gallery—this doesn’t mean I’m in partnership with them. That may sound like nitpicking, but these distinctions matter. A partnership or collaboration should be a productive force, should result in something more than the original parts, for the benefit of all parties (in that sense, July’s charity shop was exemplary).

That’s not to say that Mirza’s own work doesn’t contain interesting ideas. Psychedelic drugs are a touchstone, offering a particular route, perhaps, for how minds might be opened and a less restrictive society achieved. The specific commission for the show was a piece called Chamber for Endogenous DMT (Collapsing the Wave Function), 2017: a sound-proofed isolation chamber in which viewers sat in total darkness, the sensory deprivation possibly producing mild hallucinations. As an artistic experience, it was perfectly valid. But as a research experiment drawn up in partnership with Imperial College and Greenwich University (two institutions that are conducting studies on psychedelics), it seemed feeble. Hallucinations by themselves are certainly not proof of the effect of DMT (the psychoactive substance naturally occurring in the human body which the set-up purported to detect). Nor do many genuine research experiments allow participants to self-select and report their experiences only if they want to. The whole scientific, collaborative angle felt like rather a sham—a partnership solely in the sense of some hyped-up “brand crossover,” where the real motivation is about creating name recognition. In the end, the only thing it seemed to demonstrate successfully was the depressing truth of how easy it is for concepts such as collaboration and cooperation to be adopted not in the cause of social change but for the empty rhetoric of marketing and promotion.