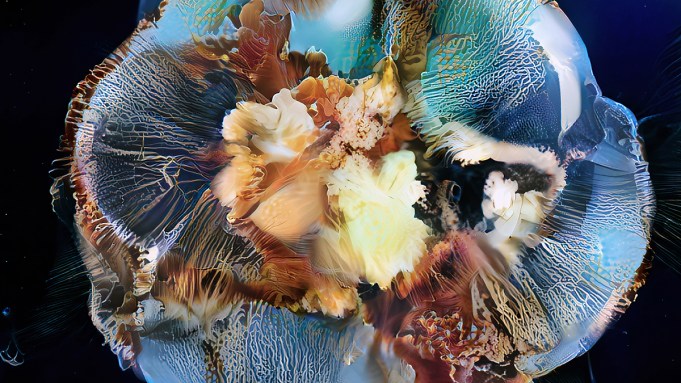 The creature appears to be, at first glance, a parrot, with bright feathers in yellow, red, green, and blue. But another look, and one sees that it’s shaped more like a duck, or perhaps two ducks melded into one. What looks like an eye might really be the wing of a butterfly. The more closely one looks at the image, the more the creature is unrecognizable; it dissolves into a strange jumble of component parts, which seem to add up to nothing, and then cohere once again into something both familiar and unknown.

This is one of the images from Sofia Crespo’s series “Neural Zoo” (2018–20). Crespo is an artist whose work combines neural network technologies and images of the natural world to generate what she calls “speculative nature.” All the images in this series have this quality of the real and unreal combined: frogs that seem to be flowers, moth wings that appear to become their own landscape, translucent jellyfish-like creatures with impossibly vivid internal organs. There is something of an optical illusion in their hybridity, as they trick our brains into trying to name or define what they might be.

To create these creatures, Crespo builds datasets of images from the natural world and uses convolutional neural networks to interpret them. “What a neural network does is extract the textures from a dataset, and create a new image from that,” Crespo said in an interview. The image then evolves. “It starts from a place of pure noise, and then gradually, through each convolution, it begins to grow. It adds more detail and more texture.” In this sense, the neural network allows Crespo a kind of expanded capacity to visualize the natural world though interpretation and combination, one that might get more distant from photographed reality in every iteration.

Crespo is one of a growing number of artists who are using artificial intelligence to reinterpret the natural world, often with an eye toward inventing surreal natural landscapes. Artist Refik Anadol, for instance, in his work Quantum Memories (2020), uses both AI and quantum computing tools on a dataset of more than 200 million images to generate an operatic, large-scale video tableau that portrays what he thinks of as a “collective memory” of nature as it has been seen and photographed by millions of eyes. In Trevor Paglen’s series “Bloom” (2020), photos of flowering trees were assigned unnatural colors by machine learning technologies, resulting in strange, unnatural, but oddly beautiful patterning. Like Crespo’s, these works may be said to offer speculative natures—interpretations of the natural world that are rooted in our reality but also stand apart from it.

Crespo’s work is, of course, distinctly contemporary in its reliance on neural networks. But it also hearkens to pre-camera ways of seeing and envisioning the natural world. “In the Middle Ages, for example, somebody would come and describe what they had seen after an expedition to someone else who could only illustrate it with what they had seen before,” Crespo said. “So maybe they had seen a lion, but the other person couldn’t imagine what a lion would look like, so they drew it with the legs of a dog or the head of a cow or something else they had seen before.” These hybrid animals led to confusion about what creatures actually existed and what they looked like; they confounded early taxonomists. Reading seventeenth-century natural histories today, it’s clear how this blend of reality and myth colored the way that people saw the boundless possibilities of the natural world. Why would one not believe, as Sir Thomas Browne did, that some version of a mythical creature like a basilisk might exist, even though he had never seen one? Alternately, why would one not at least acknowledge the symbolic significance of a nonexistent beast, as Browne did with the griffin? Crespo’s work points toward this way of seeing the world—with an expansive imagination and an allowance for possibilities that exist beyond the realm of what we can see. It reminds us tacitly of what we don’t know. After all, scientists estimate that there might be more than five million undiscovered plant and animal species on earth; there are vast swaths of natural life about which we can only conjecture, based on our imaginations.

Something of the romantic lurks in Crespo’s work. There is terror as well as beauty in her uncanny forms, particularly in their familiar unfamiliarity. Indeed, part of the original inspiration for her work came out of fear. When she was a child, she saw a 3D movie that included a projection of a jellyfish swimming close to her, an experience that terrified her in the moment, she said, and led her to develop a phobia of real jellyfish. “It was fascinating how this experience that had happened in a virtual way translated to something in the real world,” she said. When she began to work with neural networks, the first thing she did was create a jellyfish—transfiguring the object of her fear into something different but not entirely other.

This kind of transformation—of parrot into plant, of what we can see into what we can imagine—is not new, but new tools have expanded the possibilities for it, as Crespo’s work demonstrates. There is beauty and wonder here, as well as terror. “Neural Zoo” gestures toward the ways in which virtual and physical realities can mingle, indistinguishable and entangled as part of our experience of nature.