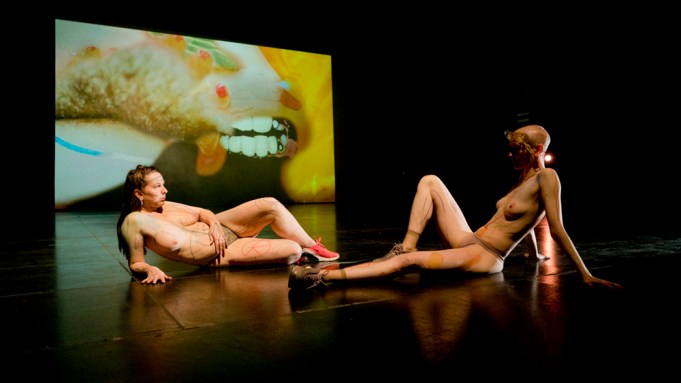 Performance takes a significant role at the 58th Venice Biennale. The Golden Lion for best pavilion went to Lithuania for its environmentalist opera set on an indoor beach. And for the first time, a performance program—conceived by Biennale artistic director Ralph Rugoff and Delfina Foundation director Aaron Cezar—is built into the event, with performers activating the spaces between the Giardini pavilions and around the Arsenale. The program included eight performance works staged throughout the Biennale’s opening week, and a shorter set is scheduled for the closing weekend, November 23 and 24. Zadie Xa organized a procession through the Giardini with a drummer and four solemn performers, dressed in elaborate costumes with elements alluding to various Asian cultures. Artist and queer activist Alex Baczynski-Jenkins staged a high-octane three-hour performance in a space at the back of the Teatro Piccolo Arsenale that was darkened to convey the atmosphere of a sexually charged underground club. Androgynous dancers in dresses moved together in a box-step pattern, at times slowly and sensually, as if to express queer solidarity, and at other times quickening into a passionate frenzy. Overall, the performances lent the affair an experimental energy, often pushing ideas around gender, nationality, representation, and language further than works in other mediums on view in the Central Pavilion and the Arsenale did. The most thrilling performances were by Victoria Sin, Paul Maheke, and Florence Peake and Eve Stainton, each of which engaged with questions of identity.

Nonbinary drag queen Victoria Sin presented If I had the words to tell you we wouldn’t be here now (2019) in the Arsenale’s Giardino delle Vergini, with a haunting musical accompaniment by Matteo Gemolo on a traverso, or baroque flute. Wearing a red dress with a plunging neckline, towering heels, and a platinum wig, Sin lip-synched and enacted a monologue about language’s limited expressive capabilities, unpacking the ways in which words and names are used to define and contain individuals within social constructs. “I want to use words to tell you that I am more than you could say because you have not been given the words to describe how multiple your selves are,” the artist said, moving their lips to their prerecorded voice. As they described their character’s family history and the shaping of their identity through a discussion of places and experiences, Sin would occasionally pause to allow a mournful musical passage to stand in for an idea impossible to express in language. The work is a layered series of duets and dialogues: between performer and instrumentalist, between Sin’s monologue and a voice-over suggesting the subconscious, between Gemolo’s live improvisations and a recording of him playing a composition he wrote (both of which riffed on the music of Wilhelm Friedemann Bach). This slippery form complemented its theme of unstable selfhood.

In the same space behind the Arsenale, so redolent of Venice’s imperial maritime history, Maheke’s performance centered on a search for his “authentic” self, one that lies beyond tropes of subjugation related to his blackness and queerness. Titled Seeking After the Fully Grown Dancer *deep within* and first performed in 2016, the twenty-minute work entailed Maheke dancing with his eyes closed on and around a low platform in a grassy, sunlit clearing, while maintaining a running monologue laced with self-deprecating humor. Where Maheke has often performed to loud electronic music, here he danced mostly unaccompanied, with only an occasional burst of African or club music. He held the audience rapt with his easy speaking manner and rhythmic gyrations, which accelerated and slowed and at times had him bumping into viewers. “Does it feel authentic, you witnesses, does it?” he asked at one point. At another, he cast doubt on the feasibility of his quest “because you’re all here, surrounding me, looking at me, and I’m supposed to be freed from your expectations, freed from fear of you judging my body, of this body becoming the center of attention, but also because ultimately I don’t know if it’s possible to be authentic onstage.” A statement for Maheke’s 2016 show at South London Gallery described his work as concerned with “the body as an archive with its own cartography and colonized zones”; in this setting, his generous presentation of his own vulnerability felt profoundly moving.

In their powerful piece at the Teatro Piccolo Arsenale, Apparition Apparition (2019), Peake and Stainton used their bodies to create living sculptures evocative of broken earth and landslides, prompting reflection on environmental degradation. The performance began with the women—wearing just trainers, thongs, and chain belts—climbing among audience members and inviting them to draw on their bodies with pens they provided. Once their breasts, buttocks, limbs, and faces were covered with marks, the two artists moved to the stage, which was minimally decorated with two clay sculptures by Peake and a video projection in which images suggestive of bodily orifices and fluids around an enlarged set of teeth slowly shifted. Against this backdrop, Stainton and Peake, who are lovers, assumed a series of intimate sculptural poses in which their bodies would join—face in crotch, breast in mouth, or limbs tightly entwined—and then slide apart, ready to take on a new configuration. The tender dynamic between them was surprisingly forceful, evoking primeval mating or death rituals as well as geological cycles of growth and collapse. Stainton and Peake have previously taken aim at conservative social mores, painting each other’s vulvas in a piece called Slug Horizons (2018). This performance in Venice seemed to ask how queer bodies might contribute to the construction of alternative social systems in this time of ecological crisis, more beneficial than the destructive one we live in now.