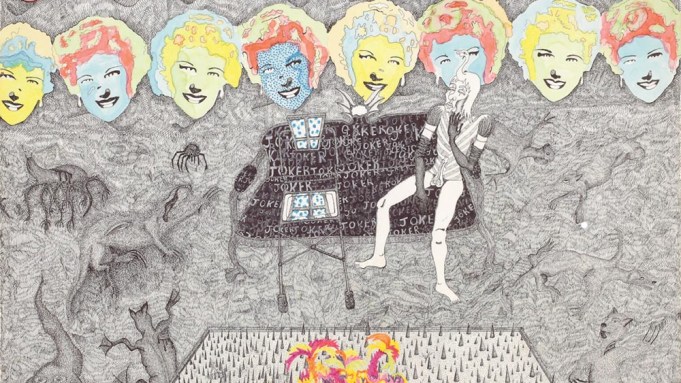 IN 1971 seventeen-year-old Sophie Podolski traveled with her friend and fellow artist Olimpia Hruska from Brussels to St. Moritz for a two-month stay. In a chalet belonging to Hruska’s family, the pair consumed marijuana and acid and made art. Both were members of the Montfaucon Research Center, a Brussels art group active from 1968 to 1973. Comprising only five members, it was less a collective than a group “in residence” (as one of its founders, Joëlle de La Casinière, described it), with a shared aesthetic commitment to, in the words of member Michel Bonnemaison, the “overthrow of the semantic order.”1 By the end of her Swiss sojourn, Podolski had nearly completed her project, a book-length work of what the group called “graphic poetry”—a combination of writing and drawing in which the drawings are linguistic and the writing is a form of drawing.

Podolski called her 280-page book Le pays où tout est permis, or The Country Where Everything Is Permitted. The title is borrowed from William Burroughs’s 1964 cut-up novel Nova Express, in which the last words of the enigmatic character Hassan i Sabbah are “Nothing Is True—Everything Is Permitted.” Le pays follows the latter part of this dictum in form and substance. Podolski composed the text by hand, filling page after page of a book maquette with prose architectures: stacked lines of purposeful script, broken up by dashes and ellipses, that reach for the margins of the paper. Punctuation, grammar, and semantics are at the service of her nimble mind, and she runs full tilt at politics, culture, sex, schizophrenia, music, capitalism, drugs, bodies, religion, and revolution. Her writing is unwieldy—Marshall McLuhan’s description of Nova Express as an “endless succession of impressions and snatches of narrative” is equally applicable to Podolski’s book—but it is also all-consuming, rhythmic, alchemical:

Write me an autograph

in the village they call me Sophie cocaine

Venus—of a thousand waters and a day

The book evinces Podolski’s boundless hunger for taking in language and letting it flow out again with new meanings and fresh purpose. The speed and nerve of her language is matched by the unruliness of her line, which seems to shift and shape spontaneously, proposing strange juxtapositions and hybrid creatures. She writes with buoyant urgency: “writing is a living thing . . .  WISDOM SHOULD BE SUNG.”3

PODOLSKI WAS BORN in Brussels in 1953. Her father was a musicologist and lutist, and her mother a ceramist. Her paternal grandfather had fled what is now Ukraine in 1917, and his emigration left him, and later his son and grandchildren, stateless, a status that wasn’t resolved until Podolski was twenty. Though essentially self-taught, she was exposed to art and began to practice it at an early age, sporadically attending etching workshops and befriending numerous cultural luminaries and activists. In 1969, when she was fifteen, she met the cohort of émigrés from various countries who, together with Podolski, would become the Montfaucon Research Center. She had been diagnosed with schizophrenia around age eleven, however, and her illness worsened as she grew into adulthood. She died in 1974, at age twenty-one, from injuries sustained in a suicide attempt. Podolski’s work was preserved after her death by de La Casinière, and in 2018, Wiels, a contemporary art center in Brussels, mounted the first exhibition of her art—more than a hundred works on paper and the manuscript of Le pays où tout est permis. (The French editor and publisher Pierre Belfond published the whole of Le pays as a book in 1973 but reproduced it in typescript, compromising the work’s graphic integrity; it has never been fully translated into English.) The accompanying slim catalogue provides the first critical consideration of Podolski’s life and output, which includes some three hundred works on paper, beginning with etchings made between 1968 and 1969, as well as a handful of facsimile pages of Le pays and corresponding translations.

The formation of Montfaucon seems to have been pivotal to Podolski’s artistic development, not only through the group’s potent aesthetic but also through the freedom Montfaucon offered to pursue a life advantageous to her artmaking, in which sexual, political, and social liberation could be lived daily, in the open, rather than simply in the interior of the mind. With its small membership, the group provided an intimate setting for this free expression. The French literary magazine Tel Quel published facsimile excerpts of Le pays in two issues in 1973. In his brief introduction, editor Philippe Sollers held Podolski up as an exemplar of the notion that “writing comes first and foremost from a certain way of living.”4 (Still, as Chris Kraus points out in her essay in the Wiels catalogue, Podolski didn’t need the imprimatur of the literary elite. She responded to Sollers’s attention with a drawing titled Portrait de la fragilité de ph. S and a letter in which she writes of herself, tongue in cheek, “I’m a chattering blackbird—I’m a puddle of oil—I’m a child sitting on the floor waiting to be rewarded.”) This understanding of life and art as inextricable is echoed in Frank Zappa’s liner notes for the 1966 Mothers of Invention album Freak Out!, which Wiels curator Caroline Dumalin cites in her essay for the catalogue. The freak, Zappa writes, “casts off outmoded and restricting standards of thinking, dress, and social etiquette in order to express creatively his relationship to his environment and the social structure as a whole.”5 The Montfaucon group called themselves “freakies,” reports Kraus, in counterpoint to the era’s predominant “hippies.”6

The vital quality of Podolski’s writing—her sense that “writing is a living thing”—comes through in the range of visual expression evident in her drawings. They involve a psychedelia-infused surrealism: a winged head, a grid of lips, a pattern-ornamented serpent, confounding landscapes, consecrated doodles, a head divided into rooms that are inhabited by hybrid creatures. Podolski produced an annotated alphabet in which letters are both forms and poetic signifiers: for instance, E is “vertical—three horizontal lines,” and U is “vagina—pocket—cunt—to receive.” She drew calligraphic letterforms (a gestural language that resembles Mirtha Dermisache’s graphic writing) and numerous works of sequential art, both wordless and with text, including the magnificent Histoire de Simonis (ca. 1969), a suite of thirty-eight drawings about a one-legged human born from a sardine can who pursues love and friendship only to marry himself at the end. Much of her work, like Le pays, combines words and pictures, often compositionally intertwined, and she primarily used the same type of pen, a Rapidograph, for both, so that the lines of one form resound in the lines of the other.

The world Podolski created is thorough, every bit her own, a vision of form, syntax, and meaning. “I write sleeping, like sleeping beauty,” she says in Le pays. Sleeping Beauty lay dormant, waiting for some outside force to awaken her, but Podolski shapes her own reality while she slumbers, and the world she wills into being lies in parallel to ours. Hers is the country where everything is permitted, a daydream fantasy. “If you’re worthy of the country,” she writes, “your eyes will light up the inside and the outside.”7 Her desire, however, seems not to exist in two separate states but to erase the boundary between them:

[blockquote author=”” link=”” target=”_blank”]We want to fuck the people we meet in passing—
but beds are in houses—hotels are expensive—we
should live in the street and make theater and go out
to buildings not making theater—then we’d have
something like the PLAYFUL CITY—and yet sleep
is already in the street—already the street is asleep—
sleep and the street are the same thing.8[/blockquote]

While writing offers Podolski a form of reprieve from the restrictions of the real world, she sees its shortcomings, in particular, its transience:

[blockquote author=”” link=”” target=”_blank”]Not everyone is endowed with the vice of writing—
the vice of writing—a limited number even—I
wander sinuously—am I translucent?—I like
twisting myself twist me—embrace me—So I’m
ill loved—for being so much loved—I’ll go much
further one day I’ll stop the detox—I’ll stop
writing—and I’ll rush blindly—whore or not—yes
or whore—living dead with no way back—I’ll start
with a suicide—I’ll no longer be blind—I’ll find it
so hard to bear the idea of writing and reading in
the half-light that I’ll forget instantly—never again
will I win any victories—I’ll live in the sunshine
because I’m strong and because spitting Indian ink
is no more my profession than love.9[/blockquote]

Elsewhere she states, “I am a trip without a traveler”10 and “I am not a poet but an unfinished poem.”11 Both characterizations hint at the limits of language and at a dissociation between mind and body, as though her sojourns into the other world through art are undertaken only by her mind, while her body remains firmly rooted in one that limits her.

PODOLSKI LIVES a kind of second life in Roberto Bolaño’s writing. He discovered her work in 1976, in the second issue of the French magazine Luna Park, where Podolski’s graphic poetry appeared alongside visual work by Roberto Altmann, Mirtha Dermisache, Christian Dotremont, and others. Bolaño devotes a poem to her (later gathered in The Unknown University) and, in his novel The Savage Detectives (1998), makes her a mother of Mexican avant-garde poetry. In the latter, the character Ernesto San Epifanio classifies all literature as heterosexual, homosexual, or bisexual; poetry is homosexual, and Podolski is a “faggot” poet who wanders “in stagger-step from ethics to aesthetics and back again.”12 Bolaño’s Infrarealist Manifesto, composed in 1976, could have sprung from a reading of Le pays: “Tenderness like an exercise in speed. Breath and heat. Experience at full tilt, self-consuming structures, stark raving contradictions.”13 (In a neat triangulation of influence, Bolaño makes sly reference in the manifesto to Burroughs’s Nova Express and echoes Podolski’s affiliated worlds: “The bridges of Noba Express are anti-codification. . . . Our bridges to unknown stations. The poem interrelating reality and unreality.”14)

Podolski’s work is a strange gem buried in ’60s and ’70s counterculture, an intimate cri de coeur in the midst of a profoundly outward-looking era invested in political and social ideology. The catalogue begins the work of bringing her writing and drawing, and hopefully that of the Montfaucon Research Center, to greater attention, and yet despite sensitive readings of her work, she herself seems both present and not. The catalogue reproduces only a sampling of Podolski’s work, and so the picture of her busy mind feels partial. In a pair of photographs from ca. 1973, she poses alone against a brick wall. In one, she looks away and smiles mischievously. In the other, she looks directly at the camera and scowls. What happens in the gap isn’t known.

14. Roberto Bolaño, “Manifesto Infrarrealista,” unpublished 1976, translation by the author with thanks to Chris Andrews.