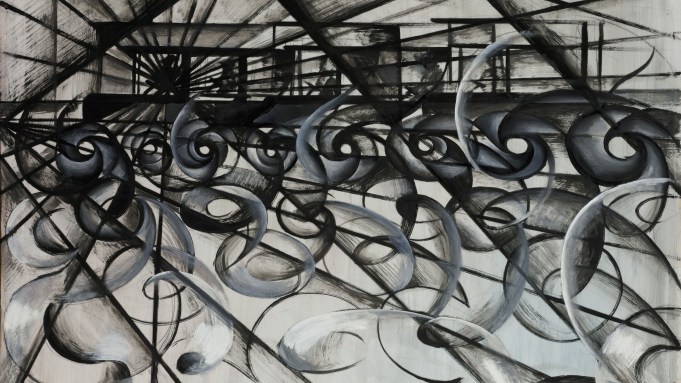 A group of 14 modernist works by artists including Moholy-Nagy, Picabia and Giacomo Balla buoyed Sotheby’s Impressionist and modern art evening sale last night after two nights of doldrums at Christie’s. The over-two-hour sale tallied $290 million with 64 works on offer, approaching the house’s high estimate of $313.9 million. In the Impressionist and modern art category, the total was second only to the house’s $331-million sale in May 2012, which included Edvard Munch’s The Scream. Eighty-one percent of works found buyers.

“There was very good energy in the room—incredible energy,” said New York dealer Christophe Van de Weghe, leaving the sales room after unsuccessfully bidding on a large 1969 Picasso. (Musketeer with a Pipe brought $30.9 million.) “What was surprising was that so many lots sold over their high estimates.” According to Sotheby’s, 94.2 percent of sold works brought prices at or above their estimates.

“The estimates were much more reasonable than last night,” New York dealer David Benrimon told A.i.A. after bagging a 1975 Marc Chagall canvas for $2.2 million at the evening’s end. “Tonight they did their homework and had better estimates. Many works were fresh to the market, and had not been shopped around before the sale.” Simon Shaw, head of the Impressionist and modern art department, pointed out at a post-sale press conference that only a dozen works offered last night had appeared at auction in the last 20 years.

Opening the evening’s proceedings were the 14 modernist works, which brought a total of $64 million. All had been off the market since prior to 1975 and were purchased from Paris’s Galerie Tarica, according to the catalogue. The highest price among these works was achieved for Balla’s 1913 oil and ink on paper Moving Automobile, an abstract work in which motion is evoked with raking diagonal lines and multiple swirl shapes. It fetched $11.5 million, which, despite not meeting its low estimate of $12 million, set an auction record for the artist.

During the 37 minutes it took to sell these 14 works, auction records were set for four artists, including two for Francis Picabia. His abstract canvas Volucelle II, ca. 1922, sold for $8.8 million to an unnamed buyer, more than doubling his record previous to last night, of $4.1 million. Over five minutes of bidding, May Ray’s Promenade, a 1916 abstract oil, brought $5.9 million from an anonymous purchaser, nearly doubling the artist’s previous record of $3 million.

The biggest sale of the evening was Alberto Giacometti’s 1955 bronze Large Thin Head (Large Head of Diego), which met its high estimate of $50 million after seven minutes of bidding. The buyer was New York’s Acquavella Galleries.

Picasso’s Head of a Woman (1935), a painting of his young lover Marie-Thérèse Walter, was the second-highest sale, fetching $39.9 million from an unidentified buyer after a four-minute bidding war, with Sotheby’s specialists David Norman and Simon Shaw contending.

While moderns dominated, Impressionists also sold well, led by Claude Monet’s Ice, White Effect (1893), which rang up at $16.1 million, above its high estimate of $14 million. The winter landscape shows ice floating on the Seine.

At a post-sale press conference, Shaw touted global participation, with sellers from 13 countries and buyers from 36. You can have a sale like this, he boasted, “when you have property that his fresh to the market and estimated in a responsible way,” a clear dig at the competition.

“This is a sophisticated market,” New York dealer Frances Beatty, of Richard L. Feigen & Co., told A.i.A. after the sale. “People recognize quality and they are looking for opportunities. They see that Dada and Surrealism are undervalued—witness the Picabia and Man Ray prices achieved tonight.”

The Pandemic Caused NYC’s Wealthy to Leave in Unprecedented Numbers

Ukrainian Designers Carry On Despite the Russian Invasion

Price Drop: The Vitamix Blender With a Cult Following Is 36% Off