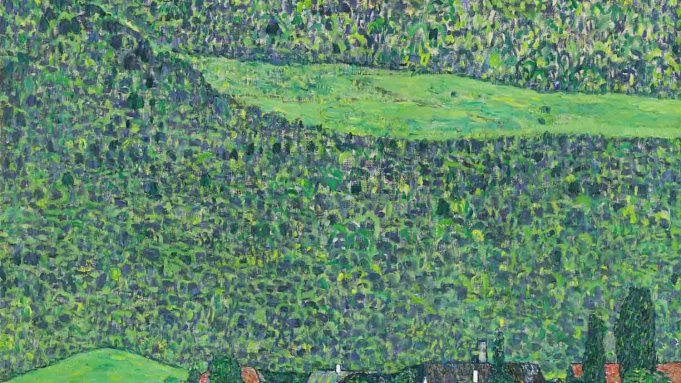 Catcalls and taunts from the 99 percent didn’t puncture the 1 percent’s enthusiasm to spend last night at Sotheby’s. An Impressionist and modern sale totaled a robust $199.8 million, above the $168-million low estimate. Over 80 percent of the 70 lots on offer sold, topped by a verdant Gustav Klimt, which made $40.4 million.

The sale was something of a relief coming on the heels of Christie’s disappointing Tuesday results. On that evening, nearly 40 percent of lots flopped in an overstuffed 82-lot sale tallying just $140.1 million. Sotheby’s chief auctioneer didn’t hesitate to point out the difference between the two sales. “If ever there was a turnaround, I think it was tonight,” said Tobias Meyer during a post-auction press conference.

“There certainly was a big contrast,” said dealer Christopher Eykyn. “Sotheby’s benefited from having works that on the whole were somewhat more conservatively estimated, generally fresher to the market, and from having 24-hour hindsight.” Following Christie’s sale, Sotheby’s staffers manned the phones, convincing consignors to lower reserves, helping to drive sales.

The strong results weren’t the evening’s only theatre. A vocal cluster of Sotheby’s unionized art handlers-who have been locked out of the building since July–and a group of Occupy Wall Street protesters assembled alongside a giant inflatable rat on the sidewalk outside Sotheby’s York Avenue building. The scene inside the lobby was chaotic as Sotheby’s security and officials attempted to welcome clients and screen the protesters. About a half hour before the sale began a handful of protesters gained entry to the soaring lobby. They sat down cross-legged, blew whistles and chanted, “We are the 99 percent.” “Calls to Sotheby’s press representatives about the impromptu sit-in were not immediately returned.

The sale got off to a quick start. Gustav Klimt’s 1914–15 Litzlberg am Attersee, a large square landscape depicting the dappled shores of Lake Attersee, sold for $40.4 million, topping an approximately $25-million estimate. The painting was put up for sale by heirs who received the work as WWII restitution from the Museum der Moderne Rupertinum in Salzburg. Zurich dealer David Lachenmann bought the work on behalf of an unnamed client. A portion of proceeds will be donated to the Salzburg museum.

Picasso also outperformed the previous night at Christie’s with three canvases out of five on offer finding buyers. His top lot was a 6-foot-wide 1967 painting titled L’Aubade, depicting a reclining male flautist and a female nude. The painting, estimated to fetch up to $25 million, brought $23 million.

Impressionist Gustave Caillebotte also added to the evening’s lift with Le Pont d’Argenteuil et la Seine, a large decorative 1883 canvas that achieved an auction record for the artist. The work sold for $18 million to an anonymous bidder on the phone with the Sotheby’s Palm Beach representative, who was evidently undaunted by the $9-million low estimate. The work wasn’t even fresh to the market. The seller purchased the piece just three years ago for $8.4 million.

Surrealist René Magritte’s popularity continued. In addition to the success the artist had at Christie’s on Tuesday, all three of the Magritte lots offered at Sotheby’s found buyers. Le Territoire, a bright 1956 canvas, a bizarre sky scene with a leafy tree and bucolic landscape floating amid puffy clouds, sold for $4.8 million.

Before the sale began, Sotheby’s brokered a private sale of four Henri Matisse bronze sculptures, Les Nus de Dos, (1908–30) depicting a monumental female figure’s back in increasing stages of abstraction. The group had been offered privately for months before the sale. The seller was Fort Worth’s Burnett Foundation, which in 2000 placed the works on loan to the Kimbell Art Museum. The foundation was established by Anne Burnett Tandy, mother of billionaire Anne Windfohr Marion. Marion’s husband, John Marion, is Sotheby’s honorary chairman. Sotheby’s did not disclose the price nor the buyer’s identity.

Contemporary sales continue next week at Christie’s, Sotheby’s and Phillips de Pury & Co. Meanwhile, dealers continue to reflect on the strange wild ride the week turned out to be. “It was really like night and day,” said Gagosian’s Andrea Crane. “Sotheby’s was much better, despite the hissing and horns from the protestors outside.”

Flying Private Has Never Been More Popular. But Is It Taking Us on a Flightpath to Climate Hell?