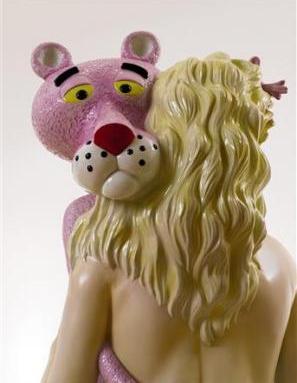 Andy Warhol’s role as art market Viagra endured at Sotheby’s last night. Four of his canvases, spanning periods and subject matter, ranked among the 10 most expensive in a high-profile evening auction in New York. The priciest was also the largest and earliest: a 1964 panel painting titled Sixteen Jackies, depicting a somber Jacqueline Kennedy in shades of blue and gold. Bidding was tempered. Dealer Jose Mugrabi, who stockpiles Warhols, tossed out a few lowball bids before an anonymous phone bidder prevailed, paying $20.2 million, near the low end of a $20 million to $30 million estimate.

The evening’s other star lot, Jeff Koons’s 1988 porcelain Pink Panther, sold rather anticlimactically for $16.9 million, below the projected $20 million to $30 million range. As part of an aggressive marketing push, Sotheby’s promoted the work with a video conversation about the piece between Koons and Tobias Meyer, Sotheby’s worldwide head of contemporary art. The artist is unusual in his willingness to participate in the secondary market sale of his work. The anonymous seller was publisher Benedikt Taschen.

While Koons’s prices have not recovered from the recession, the result was a major jump from the $1.8 million another edition of the lascivious panther entwined with a blond bombshell achieved at Christie’s in 1999. Last night’s anonymous winner had no competition and bought the sculpture through Patti Wong, chairman of Sotheby’s Asia.

“Our estimates were possibly aggressive,” said Meyer in post-sale press conference. Overall the proceedings felt sluggish and the bidding tentative, as buyers rejected inflated price tags. High-profile collectors, including Eli Broad and Stefan Edlis, sat in a packed crowd that seemed fidgety and distracted during the fast-moving sale. Yet in the end, the results revealed stability: 47 lots of 58 sold, totaling $128.1 million, near the low end of a $120.8 million to $171.4 million projected sale range.

It was a good night to be a buyer. “It wasn’t a frenzy, but it still felt solid,” said Philadelphia-based art advisor Michele Quinn, who bought Tom Wesselmann’s Bedroom Painting No. 44 for $1.3 million. Quinn also scooped up Willem de Kooning’s lyrical yellow, red and blue 1986 Untitled VII, for $4.3 million, just over the $4 million low estimate.

(All final sale prices include auction house fees. Estimates do not).

The sale got off to a steady start, stacked with works by in-demand mid-career artists like Rudolf Stingel, Rosemarie Trockel, Jim Hodges and Mike Kelley. The first peak occurred when an atypical Warhol, a 1978 black-and-red abstract painting, Shadow (Red), zoomed past a $900,000 high estimate, selling for $4.8 million amid heated bidding. The artist’s shadow series is one of the few remaining sectors of the Warhol market that has been undervalued, said Sotheby’s experts after the sale. A series of 102 shadow paintings belongs to the Dia Art Foundation

Among the evening’s biggest failures was a 1984 Ed Ruscha painting with the text “Honey . . . . I Twisted Through More Damned Traffic to Get Here,” tagged to sell for more than $3.5 million. Despite the painting’s wit, nod to L.A. car culture, and inclusion in a major 2009 Ruscha traveling show, the work failed to draw any bids. Early, classic Ruschas are more dependable at auction than his later works. Another bad patch saw paintings by Ellsworth Kelly, Agnes Martin, Frank Stella and Sam Francis fail to ignite any bidding.

Among strong performers was a trio of Jean Dubuffet paintings from the 1940s and ’50s, from the estate of San Francisco socialite Dodie Rosekrans, which sold above estimates. Mirobolus Blanc, a 1946 childlike depiction of an imperious man in a bowtie, mingled sand, stone, twine and glass with paint to create a richly textured surface. Estimated to sell for over $500,000, the work made $1.4 million.