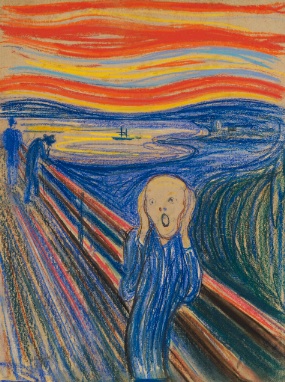 A pastel version of Edvard Munch’s The Scream sold for  $119.9 million at Sotheby’s last night, becoming the most expensive artwork ever sold at auction. It surpasses the record set by Picasso’s 1932 Nude, Green Leaves and Bust, which sold at Christie’s in 2010 for $106.5 million.

The only version still in a private collection, this 1895 Scream is one of four extant versions. The others reside in Oslo museums.

Norwegian businessman Petter Olsen, whose father Thomas was a friend, neighbor and patron of Munch, sold the work, with proceeds slated for a new Munch museum in Hvitsen.

“It’s a meme at this point, because it seems to speak so directly to everybody,” art historian and Wellesley professor Patricia Berman, who contributed an essay to the catalogue for the 2006 MoMA exhibition “Edvard Munch: The Modern Life of the Soul,” told A.i.A. the day of the sale.

“The painting has helped us to shape the way we look at the world,” Berman added. “It’s a touchstone that helps to structure reality itself.”

It’s also that rare painting that has its own Twitter account–the 1893 version, at least. It mostly just screams: “Aaaaaahhhh!”

The painting spurred seven bidders to a 12-minute bidding war, with the hammer falling at 8 p.m.

When the tuxedo-clad auctioneer, Tobias Meyer, began the bidding at $40 million on lot 20, The Scream, hands shot up in various parts of the salesroom. Bidding quickly climbed through the 60s, then stalled in the low 70s, then quickly climbed to and cruised through the 80s. There was a long pause at $94 million. By then it was a contest between a pair of phone bidders.

Sotheby’s Charles Moffett, Impressionist and modern department vice chairman, made the $95 million bid on behalf of an unnamed phone bidder. His colleague Stephane Cosmane Connery asked Meyer if he could have a moment to confer with his client by phone.

“I have all the time in the world,” Meyer deadpanned.

Connery continued to bid, and a smattering of applause greeted the $100 million mark. A long, tense pause ensued at $105 million. When Connery bid $106 million, Meyer asked, “Can I say I love you?” Moments later, after the $107 million bid by Moffett, Meyer said, “Then I shall sell it for the historic sum of $107 million.”

And the hammer fell.

After the sale, Olsen, the wild-haired and bespectacled seller, read a lengthy statement tying the work to global warming. It went, in part:

“The Scream for me shows the horrifying moment when man realizes his impact on nature and the irreversible changes that he has initiated, making the planet increasingly uninhabitable. The image of The Scream could make more of us fathom the magnitude of the consequences of our continuing emissions of greenhouse gases. This will inevitably lead to the triggering of uncontrollable feedback mechanisms that lie latent in the physics of nature. . . . More death, less life. And very few lifeboats left as we go down.”

The Munch was clearly the main event, yet there were other notable moments in the sale.

Picasso’s 1941 portrait of Dora Maar, Femme Assise dans un fauteuil (est. $20-$30 million), a half-length portrait in acid hues from the estate of New York financier Theodore J. Forstmann, sold safely within its estimate, at $29.2 million. The canvas is from the same year as Dora Maar with a cat, which brought $95.2 million at Sotheby’s in 2006.

Coming in just under its estimate was another offering from the Forstmann estate, Chaïm Soutine’s Le Chasseur de chez Maxim’s (ca. 1925), which brought $9.3 million on an estimate of $10­-$15 million. Forstmann paid a record-setting $6.7 million at Sotheby’s in 2004 for this half-length portrait of a bright-red-clad employee from the fashionable Paris restaurant.

Salvador Dalí’s Printemps Nécrophilique (1936), which features a woman standing by a cypress tree before an arresting blank landscape, her head replaced by a bunch of flowers, brought $16.3 million, well above its $8–12 million estimate.

Max Ernst’s 1940 oil painting Leonora in the Morning Light, which had never previously been sold, brought a very respectable $7.9 million on an estimate of $3–$5 million. The works shows the raven-haired painter Leonora Carrington in an overgrown garden in a ruin. It had long remained in Carrington’s collection.

Sales resume next week, with Christie’s and Sotheby’s postwar and contemporary sales on May 8 and 9.