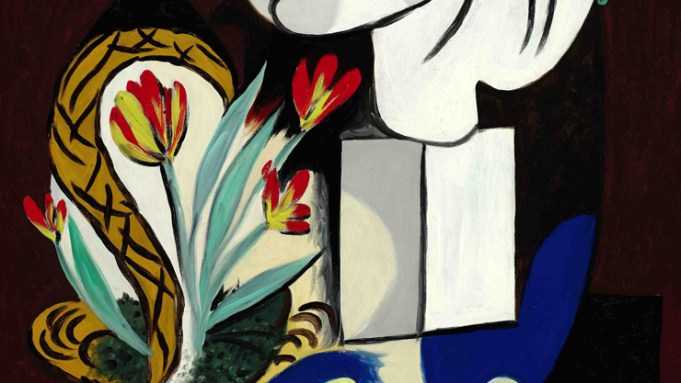 Sotheby’s New York turned in a lackluster $163-million sale of Impressionist and modern art last night, a result that fell short of the evening’s $170-$245 million estimate despite the presence of no fewer than nine Picassos, six Mirós, five Henry Moores, and four works each by Ernst, Matisse and Renoir. Thirty-one percent of the 67 offered works went unsold, resulting in a success rate comparable with the 70 percent achieved the previous night at Christie’s.

“It was clear in many cases that collectors thought the estimates were too high,” head of department Simon Shaw said at a post-sale press conference.

“The property wasn’t all that fantastic,” said Gagosian Gallery’s Andrea Crane, talking to A.i.A. by phone this morning.

A particularly fallow stretch came near the end of the 90-minute sale when six works in a row, including examples by Bonnard, Giacometti, Egon Schiele and Kees van Dongen, failed to sell.

“There was active bidding on some lots, which made things feel more buoyant than last night at Christie’s,” said New York dealer Nicholas Maclean, of Eykyn Maclean, talking to A.i.A. at Sotheby’s York Avenue salesroom. “But the offerings were a bit thin. We’re back to the levels we saw at the end of 2005.”

Sotheby’s November 2011 sale of Impressionist and modern art brought $199.8 million. Last night’s sale had been postponed from its original date of Nov. 5 due to travel disruptions caused by Tropical Storm Sandy.

Confirming the market’s enduring appetite for the masters, the top seller of the evening was Pablo Picasso, whose name appears five times among the sale’s top 10 results.

The evening’s higest price, $41.5 million, was achieved by Picasso’s Nature Morte aux Tulipes, painted over the course of two and a half hours one morning in March 1932. Formerly owned by collector Francois Pinault and offered last night by casino magnate Steve Wynn, it depicts the artist’s famous mistress and muse, Marie-Thérèse Walter, as a sculpted bust amid a still life of fruit and flowers. The selling price was in the middle of the estimated of $35-50 million. New York dealer David Nahmad, sitting in the front row, dueled with phone bidders, one of whom, bidding anonymously via Sotheby’s Philip Hook, won out. But even on this striking canvas, the bidding only crept up even to the low end of the estimate from the opening bid of $27 million.

The evening’s runner-up at $17.2 million was the Spaniard’s Femme à la fenêtre (Marie-Thérèse), 1936. The canvas remained in the artist’s hands until his death, and brought a price in the mid-range of the pre-sale estimate of $15–20 million.

More than doubling its high estimate was the evening’s number-three sale, a graphic Picasso drawing of a rape, Le Viol (1940), from the estate of George Embiricos, the Greek shipping magnate who sold Cézanne’s Card Players in 2011 to unknown purchasers for a rumored $250 million. Estimated at $4–$6 million, the work brought vigorous bidding from several phone bidders, going to an anonymous buyer for $13.5 million.

The fourth-selling lot was Monet’s Champ de Blé (1881), showing a wheat field in Lavacourt, near Vétheuil, where the artist was then living. It sold for $12.1 million, well over its high estimate of $7 million, after drawing interest from several phone bidders. The painting was on offer from the Cleveland Museum of Art.

The remaining works from the Embiricos estate met mixed fates. Moore’s Two Piece Reclining Figure No. 1 (1959), a 6-foot-high bronze sculpture, fetched $4.7 million, near its high estimate of $5 million. But an Embiricos Cézanne, Le Femme á l’Hermine, d’aprés le Greco (1885-86), a small oil showing a woman in an ermine wrap and based on an El Greco, fell flat. Estimated at $5-$7 million, it failed to draw any bids.

Also failing to find buyers were two Matisse works on paper, a Rodin sculpture, and canvases by Degas, Miró, Monet and Schwitters.

Things are likely to heat up next week at the more competitive auctions of postwar and contemporary art at Sotheby’s Nov. 13 and Christie’s Nov. 14. Christie’s estimates that its sale may bring as much as $441 million, exceeding its record-setting sale of $388 million in May.

As Crane observed, it would be difficult to draw general observations about the market from one week’s sales, saying, “Everything could change next week.”